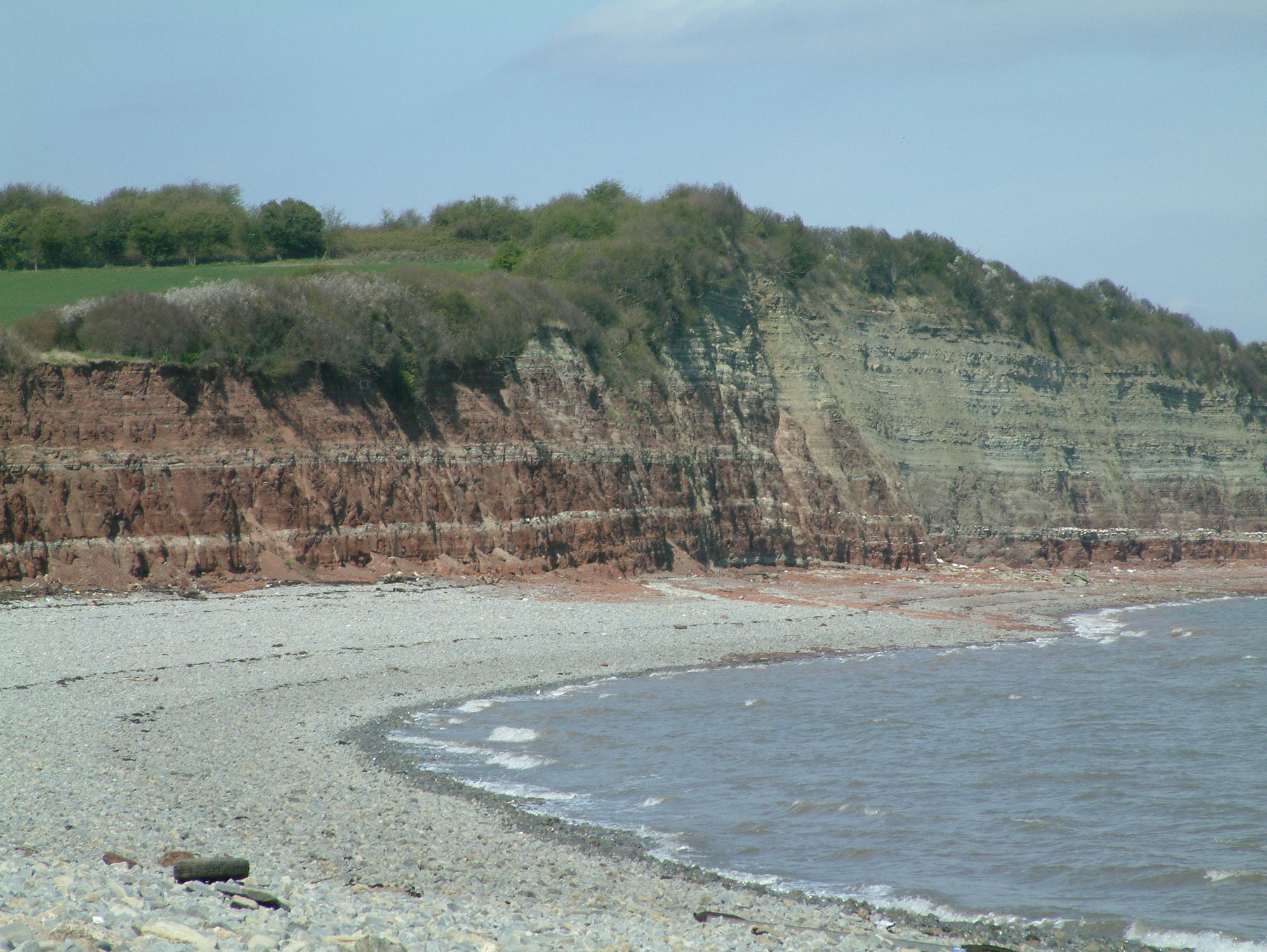 A mixture of Jurassic and Triassic rocks can be seen at Lavernock. Whilst the Jurassic rocks yield ammonites and mollusk’s, the Triassic Rhaetian bone bed similar to Aust yields fish and reptile remains.

♦ From the B4267, turn off at the signpost to Lavernock, follow the road all the way to Lavernock heading towards ‘Lavernock Point’ which will turn off down a small track road.
♦ Follow this road down and there is a small car park at the end, enough space for 4 cars.
♦ The beach is just ahead with easy access, once on the beach you can either visit the Triassic beds to the Left or the Jurassic to the right
♦ The Triassic does not contain many fossils since the Bone Bed here is very thin.♦ Ref: 51.40686°N, 3.17026°W

FIND FREQUENCY: ♦♦♦♦ – Fossils are common at Lavernock, with brachiopods and bivalves being the most common. Ammonites can be found, but you are more likely to find worn ammonites and ammonite fragments
CHILDREN: ♦♦♦ – Lavernock is suitable for older children since the foreshore can be very rocky and there is a walk to the best beds.
ACCESS: ♦♦♦ – Parking space for four cars, with good access to the beach. There is a short walk to get to the main sections at Lavernock.
TYPE: – Fossils are mostly found in the rocks along the foreshore but can also be found in the cliff face and also in the scree slopes. The cliffs are too dangerious to collect from, so please stick to the foreshore boulders and shale.

Lavernock Point is located a little to the west of Cardiﬀ, at the edge of the mouth of the Severn. It’s a small place that attracts an inordinate number of fossil hunters, due to its more-­than-generous supply of fossils. It is formed from layers of the Lower Blue Lias limestone and shales. The Jurassic rocks here are similar to Watchet.

Fossils to be found here include bones or teeth from marine reptiles, particularly ichthyosaurs and plesiosaurs, ammonites, large gastropods, bivalves and brachiopods.

Ammonites are not uncommon but fragments can be seen around the beach. Fossils are rarely found just lying on the beach, normally you have to work hard to get them by splitting boulders that already contain worn ammonites or part ammonites, although Psiloceras is fairly common at the western end within bedding plains. .

Shells are by far the most common fossil at Lavernock with blocks full of the giant oyster, Liostrea being the most common. Many of the best finds can be found from around the area when you first enter the beach from the steps.

In June 2015 it was announced that the fossil remans of a new species of dinosaur, named Dracoraptor, had been discovered at Lavernock Point (shown left) and believed to be the earliest known Jurassic dinosaur. The skeleton belonged to a dog-sized theropod dinosaur.

The Triassic rocks here are unfossiliferous and belong to the Mercia Mudstone Group (formerly named the Sully Beds, now the Blue Anchor Formation).

When approaching Lavernock Point from the direction of Penarth, the Blue Anchor Formation forms a prominent cliff beyond which are some new sea defences made from massive blocks of hard, grey Carboniferous Limestone brought in from outside the area. Between here and the Point the Westbury Formation is well exposed in the cliff and foreshore. It contains a thin irregular layer of sandstone rich in the mineral iron pyrites and pieces of a bone bed, containing bones and teeth of fish and marine reptiles.
Slabs of these can usually be found on the beach.

Westwards from Lavernock Point the Blue Lias is exposed and in the cliffs of St. Mary’s Well Bay is folded in a gentle syncline; its three divisions (St. Mary’s Well Bay Formation, Lavernock Shales and Porthkerry Formation) can easily be recognised. At the Point the bedding planes of the limestones contain large groups of the oyster Liostrea. Walking westwards, and therefore onto younger beds, the flattened, coiled shells of the ammonite Psiloceras are quite common.

Common sense when collecting at all locations should be taken and knowledge of tide times should always be noted. It is very east to become cut off at Lavernock, ensure you know the tide times. Cliff falls frequently occur, hard hats should be worn when searching below the cliff.

It is recommended that you take a hammer and chisel since most of the fossils are in large boulders and slabs on the foreshore and these normally require splitting. Wrap fossils well and place into containers or bags.