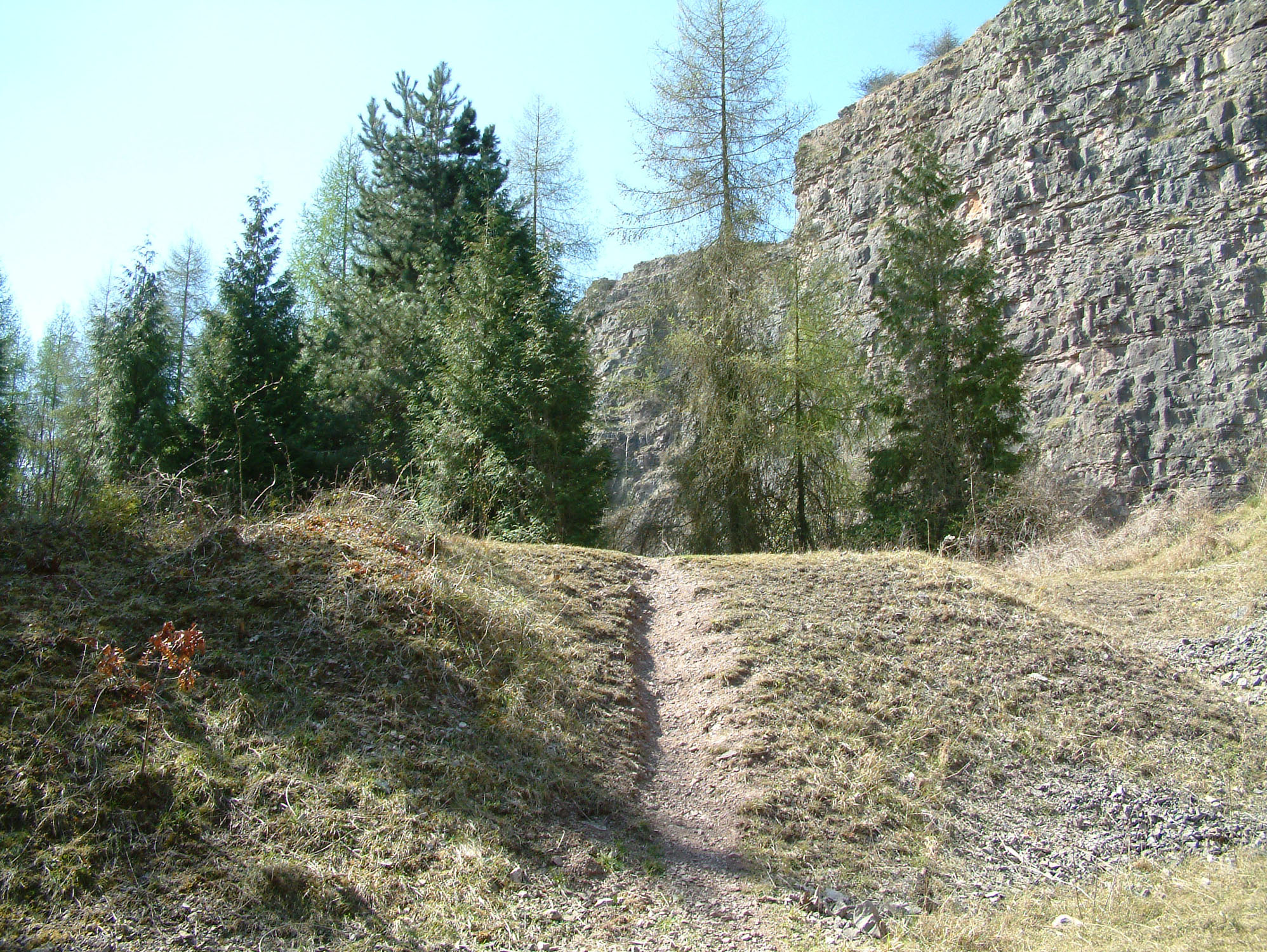 If you fancy a change from all the Shropshire Silurian and Ordovician, you could try this Carboniferous quarry, which is now open to the public as a nature reserve. Search the scree for corals, brachiopods and bivalves.

♦ The high cliff face of Llanymynech Quarry can be seen from all over the local area and is unmissable when heading towards this location. Simply head towards these cliffs by driving south from Oswestry on the B5069 and then onto the A483.
♦  Approximately 6.5km from the village of Pant, you will see a pub called the Cross Guns on the right (towards the west) with a small crossroads just before it. Continue past this for another 200m and you will come to the next small crossroads. Take the lane to the right (westwards), which is signposted ‘Nature Reserve’. Follow the lane past some houses on the left, and it will lead to a gate and a small car park on the right.
♦  From the car park, go through the gate, where you will notice two footpaths, one ahead and veering left and one veering right. Take the footpath to the left and follow it round. Do not take the narrow footpath when the path veers left, but continue on the main track. If you walk through dense trees and a plant covered floor, you have taken the wrong path.
♦  LOCATION 1 is the wide open area with high cliff faces. Follow the path ahead and it will veer left. To the left hand side of the track are shallow bunkers with scree slopes. This is the best place to look for fossils.
♦  The second location is a bit further on. Follow the path and you will see an old engine house with sleepers. When you meet a stile, cross it. After another 200m, take the path to your right with a post with an acorn on it, which leads to the next location.
♦  LOCATION 2 involves searching in the shallow bunkers and scree slopes. Some are more productive than others and in some you won’t find any fossils in. The second location is not as good as the first.
♦ Ref: 52.78745°N, 3.09206°W

There is a large variety of different corals to be collected, along with brachiopods, crinoids and other shells from the Carboniferous limestone. Llanymynech Quarry is half in England and half in Wales, since the Welsh borderline runs along the quarry face. However, since you will be collecting from only one side of the cliff face, it is therefore in Shropshire.

The Carboniferous limestone is packed with corals, shells and other fossils. Take care when visiting this quarry as there are a lot of rare plants, and keep to the footpath and the shallow scree bunkers where collecting is ideal. Llanymynech Quarry covers a wide area. The best locations to collect from are the scree slopes within the bunkers that surround the open areas. Fossils are weathered out of the rocks and can simply be picked up. Search by turning over rocks. It is best to concentrate on one area, because many people will have already searched the surface, so by moving rocks and looking more deeply, you are more likely to find something. There are some areas containing no fossils, but it is hard to determine where these areas are, since they are spoil heaps. However, if you don’t see any fossils at all, try moving to the next spoil heap. The best area is before the old engine room in an open area following the main track, leading left from the car park.

Llanymynech rocks are of regional geological importance because they are the only exposure of the Dinantian age rocks in Powys. This site comprises a prominent limestone escarpment that overlooks the village of Llanymynech. The exposure consists of a series of quarries to the south and east of the hill. This is the longest lateral exposure of the Carboniferous Limestone south of the Eglwyseg Escarpment near Llangollen. Exposed in the of the main quarry, known as the Amphitheatre, are the purple, fine-grained Basement Beds and the lower beds of the Clwyd Limestone Groupincluding the Leete and Loggerheads Formations. There are also excellent examples of undulating, sharp contacts between the purple Basement Beds, grey limestone and mudstone; excellent sedimentary structures in the cliff faces and ab;undant shelly fossils.

The geology is Dinantian (LowerCarboniferous) from the Visean Stage, which ranges through the Chadian substage up to the Brigantian. The rock formation in the region is from the Clwyd Limestone Group, part of the Carboniferous Limestone Supergroup.

These imposing limestone cliffs can be seen for miles around and show you a snapshot of a warm, shallow sea. Gigantic fossilised seashells and corals can be found here. The ridge has been quarried extensively for its Carboniferous limestone, for agricultural purposes (as quicklime).

The cliff faces at Llanymynech Quarry are extremely high and do occasionally crumble. The land next to the cliff faces are closed off with signs saying ‘Private’. You must obey these rules, as they are for your own safety. There is good collecting from the opposite side of the footpath in the scree bunkers, away from the high cliff face.

Do not hammer the cliff face. You will not find any fossils this way and you will put yourself at danger, as well as having to trespass onto the private area that runs along the side of the quarry face. By all means, take a small hammer to split any rocks lying around on the scree floor, but do not disturb the footpath or make the footpath dangerous for others. You are far more likely to find fossils by searching in the scree. The rocks are small enough and normally do not require splitting, but a hammer may come in handy to shift and turn rocks over.

This is a Nature Conservation Area. Stick to the footpath and only collect from the areas within the ‘public’ area of the quarry.

This site is an SSSI. This means you can visit the site, but hammering the bedrock is not permitted. For full information about the reasons for the status of the site and restrictions please download the PDF from Natural England – SSSI Information – Llanymynech Quarry