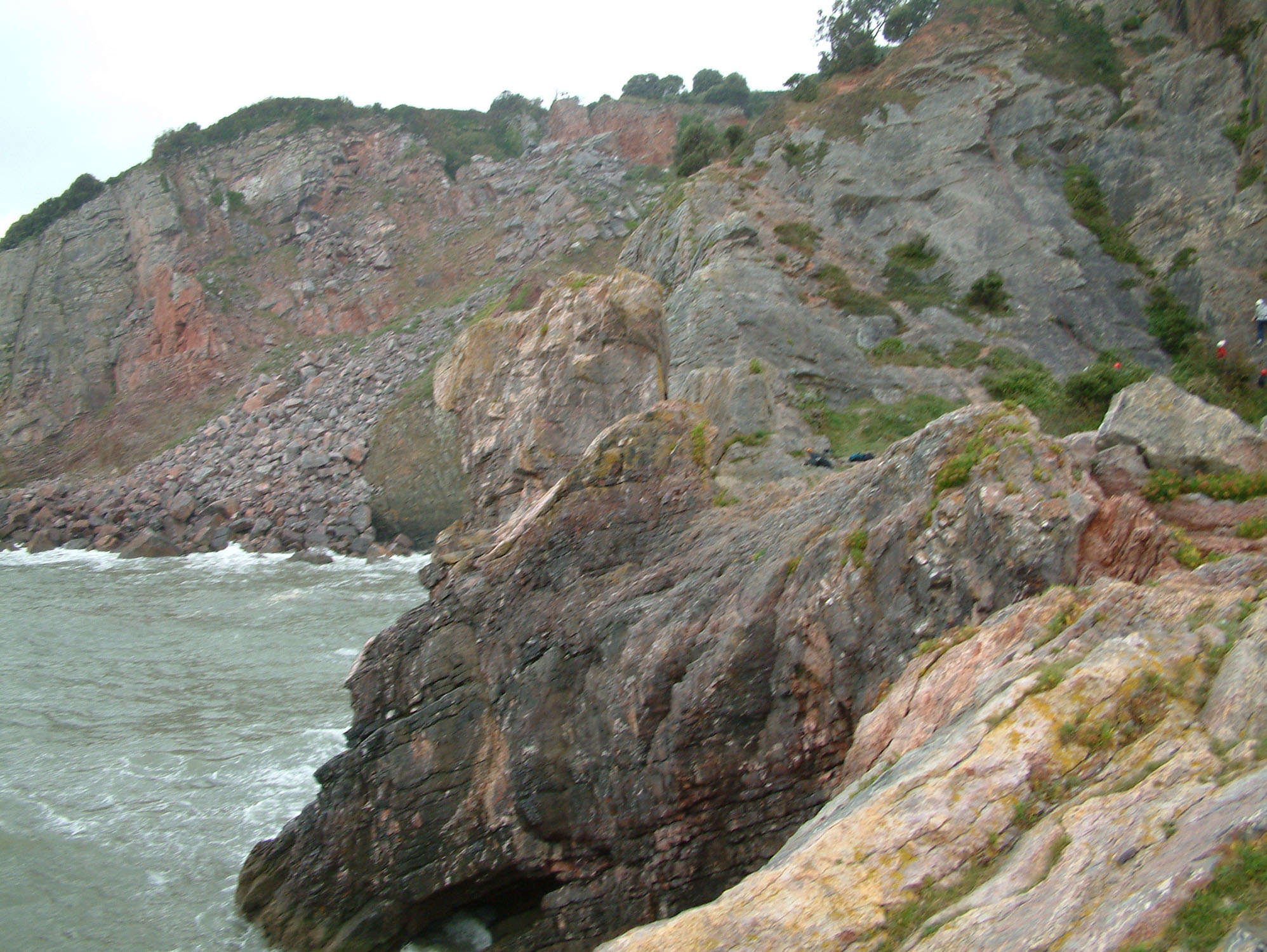 Daddy Hole was once a highly productive quarry, but now forms part of the Torquay coastline. It is rich in Devonian corals and is now an SSSI. Corals can be found in both the quarry and scree slopes on the foreshore.

♦ Head into Torquay. The best way to find Daddy Hole is to follow signposts to ‘Kents Cavern’. When you reach the cave, the narrow road winds down and around, heading towards Torbay. Follow this road, which then runs along the promenade.
♦ You will pass some cliffs which are featured in our guide to Hopes Nose. Follow the road to the end of the promenade and it will start to veer inland and climb a hill. You will then see some further cliffs that form part of Daddy Hole.
♦ There is a car park halfway up the hill on the left with some bottle banks in it. Park here and walk down the footpath to the promenade. Alternatively, you can park along the promenade and walk to Daddy Hole.
♦ Climb up and over the large rocks and you will immediately see the quarry at Daddy Hole.
♦ Ref: 50.45556°N, 3.51283°W

FIND FREQUENCY: ♦♦♦ – Although we have set the ‘find frequency’ as ‘Medium’, collecting Devonian Corals is something that requires a little understanding and acceptance that these fossils are poorly preserved and often difficult to see. However, they are still just as important as, say, ammonites from the Jurassic. You just have to take a step back to see the big picture and be satisfied with the finds that you do make.
CHILDREN: ♦♦♦ – This location is too dangerous for families with children. The site is really for the enthusiast or professional.
ACCESS: ♦♦♦ – Although there is a good car park at the top of the hill, access is difficult due to the lack of a beach. The tidal conditions also make this location quite dangerous.
TYPE: – Daddy Hole used to be a quarry, which has now been cut foreshortened by the sea. However, there are also ledges on the beach containing corals, which can also be found in the scree slopes and the old quarry itself. Note that this site is an SSSI, so no hammering on the bedrock or cliffs is allowed.

Torquay is rich in Devonian corals. If you are lucky, you can find superb corals that standout from the rocks. Fossils can be found both in the limestones and the calcareous mudstone within sandy deposits. During the Devonian, there were abundant colonies of corals, which is why fossils can often be found together in groups.

The best place to look is in the scree slopes, as it is much easier to collect from these. Note that this site is an SSSI, so no hammering on the bedrock or cliffs is allowed. However, you may collect from any lose material.

The other very good place to look is on the rocks from the foreshore. These contain corals that can be knocked out using a hammer, chisel and safety goggles.Ensure collection is from loose boulders and rocks only.  In addition, it is easier to see the corals in the wet rocks. There are plenty to be found, but it can take time to get used to the shape, pattern and colour if you are not used to collecting corals from the Devonian.

Daddy Hole, near Torquay’s seafront harbour and marina, is composed of inverted mid Devonian (Eifelian) limestone of the Daddyhole Member, on a natural rocky coast that has been much modified by quarrying. The site is close to the junction of the Daddyhole Limestone Member and the Eifelian Shales

Fossils are approximately 380 to 391myrs old. Indications suggest that the marine life lived and died in shallow, quiet water. The thinly bedded limestones vary from calcareous muds to fragmental limestones. The Corals from the Devonian Rocks of Torquay are well documented. Some of the best corals come from here. They are normally a pinkish white which stands out from the rocks. There are quite a few different species of Coral, the most common is the round type. Trilobites can also be found in the past along the Torquay Coastline but these are quite rare.

The structures around Daddyhole Cove are interesting; the most notable aspect is the recumbent anticline, with much faulting and folding. The rocks here show stromatoporoids and branching corals of Thamnopora. Goniatites and gastropods are also present. Note that this is a protected SSSI and no collecting is permitted; in any case the fossils do not separate from their very hard, solid limestone matrix.

Daddy Hole can be quite dangerous. Over the years, it has become fairly overgrown, making it very hard to see the steep slopes and sudden drops. The steep slopes themselves are of significant danger because the loose scree makes them easy to slip on, especially when wet. There is also the danger of falling rocks from the tall cliffs of this old quarry. This is a location for the more adventurous.

The rocks at Daddy Hole are very hard, but the fossils can easily be extracted using a hammer, chisel and safety goggles. You will also find that some corals, which show up clearly on the day when wet, may look very faded when you take them home. However, when you wash and polish them, they will look as good as they did on the day you found them.

This site is an SSSI. This means you can visit the site, but hammering the bedrock is not permitted. For full information about the reasons for the status of the site and restrictions please download the PDF from Natural England – SSSI Information – Daddy Hole