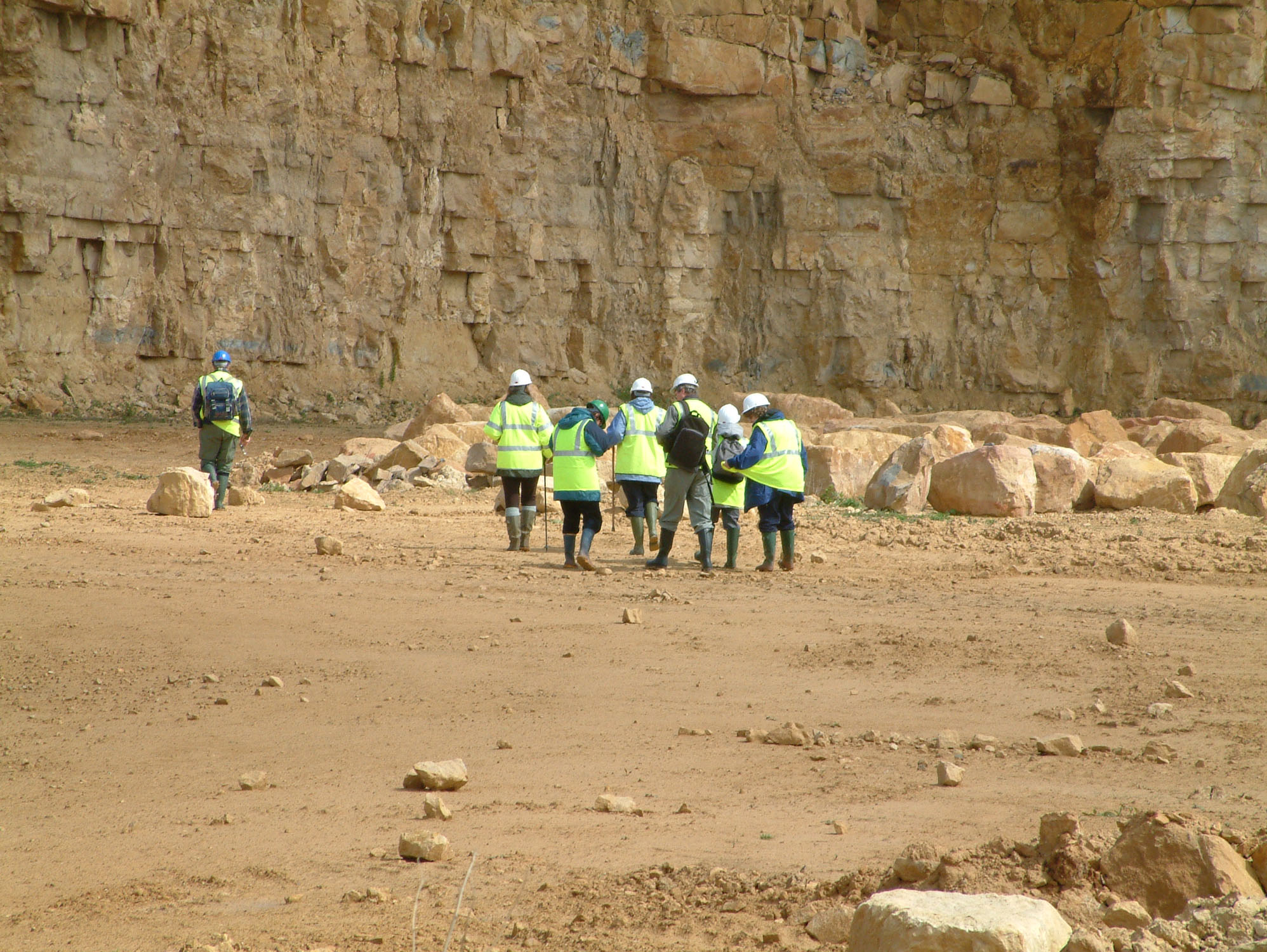 Ketton Quarry is over a mile wide – its size has to be seen to be believed. The rocks here contain ammonites, corals, brachiopods, bivalves, fish and reptile remains, and much, much more. This is a superb location to visit. The quarry has recently been designated SSSI status.

FIND FREQUENCY: ♦♦♦♦♦ – Ketton Quarry is highly productive. The rocks are rich in a wide array of fossils and microfossils, such as small teeth and bones, which can be collected from the clay.
CHILDREN: ♦ – Children are not allowed at this location for health and safety reasons to do with working quarries.
ACCESS: ♦♦♦ – The quarry is so large that you cannot miss it, but it is easy to get lost once inside.
TYPE: – This is one of the biggest working quarries in the UK and is about one mile long. You will need permission to enter. Castle Cement does cater for group visits, which have been arranged in advance, normally outside the working hours of the quarry.

This huge quarry presents an opportunity to collect fossils from many different beds (see above). Gypsum is also quite common here. Ketton Quarry also contains one of the most fascinating faults of its kind in the UK and has recently been designated SSSI status.
The quarry is too big to completely cover in one trip. It is huge and is still growing. The best area to search in is the Blisworth Limestone, which is part of the Oolite series. Ammonites can be found, but shells, corals, echinoids, sharks’ teeth and bones are more common. Dinosaur footprints have been seen, along with fragments of their bones.

The quarry shows the finest section of Bajocian (Jurassic ~175mya) to Bathonian (Jurassic ~165mya) strata currently available in inland Britain. There are extensive outcrops of Middle Jurassic strata in Ketton quarry. The successionis continuously exposed from the Northampton Sand Ironstone to Kellaways Formation. A small exposure of the junction between the Lias and the Northampton Sand Ironstone can also be seen when the water table is low.

Current and temporary exposures have allowed the whole of the Great and Inferior Oolite (Aalenian to Bathonian), and the Kellaways Beds (Callovian) to be seen and the strata are nearly horizontal.

The lower quarry exposes the Lincoln Limestone Formation (Bajocian), from the Inferior Oolite Group while the floor of the upper quarry is formed by the top of this formation.

The upper quarry is in the Rutland Formation, (Bajocian to Bathonian) from the Great Oolite Group.

At the very top of the exposures is the base of the Oxford Clay, meaning that the entire of the Middle Jurassic can be seen at Ketton Quarry. (Note that recently, a sump hole in the middle of the quarry has revealed Upper Lias mudstones and more.)

At the topper most level, a very limited exposure has been identified but it is not easy of access and will not normally be visited.

Locally brought down by faulting, Kellaways Formation rests on the Cornbrash. The argillaceous lower member, the Kellaways Clay (about 3m) passes gradationally into the Kellaways Sand (about 5.5m).

Belemnites and Gryphaea are quite common, but the exposure can only be reached via  a small landslip whichcan be extremely boggy

The Cornbrash is a massive limestone, weathering brown. The brachiopod, Obovothyris magnobovata its base indicates Lower Cornbrash. The main part is Upper Cornbrash. Large oysters, Lopha marshii, can be seen on the top surface of the Upper Cornbrash. Brachiopods and bivalves are common.

The lower part contains ostracods and is taken to be marginal marine. The central part consists of varicoloured bedded clays and silts, with more than one horizon preserving truncated rootlets.

The Blisworth Limestone is variable both in thickness and in character. It is not oolitic. It tends to weather grey. The oyster Praeexogyra hebridica is abundant. Also found are terebratulid and rhynchonellid brachiopods and fully marine bivalves such as Pholadomya lirata. The echinoid, Clypeus, can also occasionally be found.

This was formerly known as the Upper Estuarine Series.

The Stamford Member at its base consists of quartz rich silts with conspicuous truncated rootlets.

Ironstone is exposed in a pit in the quarry floor. A sample of the basal bed with Thalassinoides has been set aside for study.

The Whitby Mudstone Formation of the Lias Group can only be seen if the water table is very low. In the north west of Ketton’s quarry, the bivalve Dacryomya ovum has been found in core from near the top.

Extreme care must be taken at all times. Follow the rules of the quarry and obey any instructions given to you by the quarry workforce. Huge vehicles (some large enough for a small car to drive under) often move at speed around the quarry. Keep away from all vehicles. Blasting is also done regularly and this, combined with the high cliff faces, makes collecting from the base or from these faces very dangerous. Collect from the scree and rocks around the quarry floor, where you will have more chance of finding fossils.

You will need a heavy hammer for the rocks, and a pick and knife for the clay. The fossils can be fragile, so should be wrapped up well and placed in containers. Hard hats, high visibility jackets and steel toe-capped boots are essential. Safety goggles should be used, if splitting rocks.

Any enquiries to arrange visits should be addressed to the quarry manager at Ketton Works, at the following address:
Castle Cement Ltd, Ketton Works, Ketton, Stamford, Lincolnshire, PE9 3SX