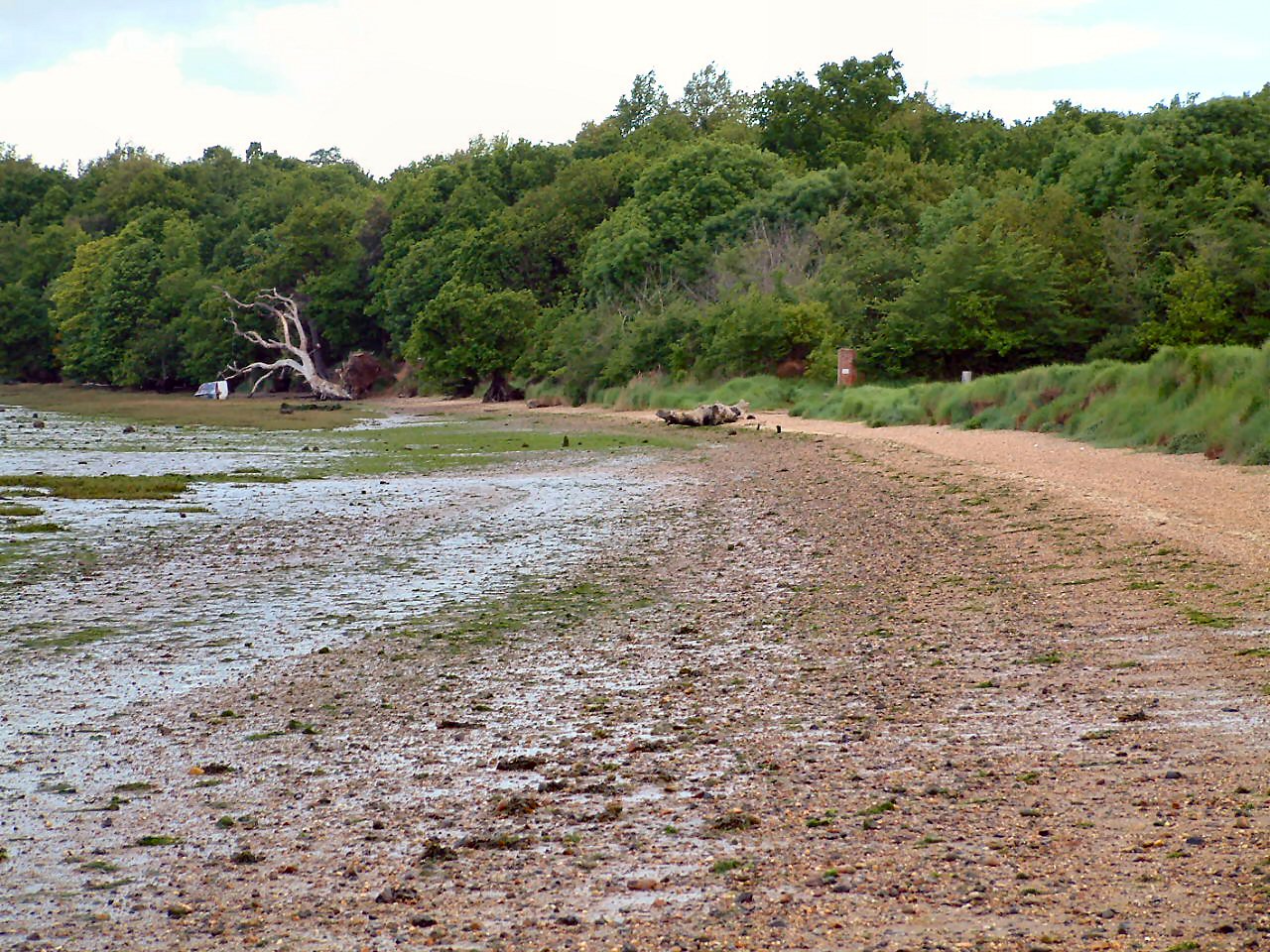 Nacton Shore is a location on the River Orwell, where London Clay is exposed in a small cliff and on the foreshore. The foreshore at Nacton and Levington has yielded a large number of reptile remains, including one complete skeleton.

♦ Either: from the large roundabout where the A12 meets the A14, turn off towards Levington. Shortly after, you will reach a junction with roads leading to Felixstowe to the east and Ipswich to the west. Head towards Ipswich. Shortly after, there is a road signposted to Levington, which you should take.
♦ Or: not far after the Orwell Bridge heading north, you will reach the first major turn off for Ipswich. This should also be signed-posted to Levington. Follow the signs for Levington until you reach a wooded area where the road veers north. At this point, there should be a turn off to Orwell Park School. Take this road and you will pass a church.
♦ On passing the school, you will see a sign for a ‘T’ junction and a picnic sign. The road will turn into a narrow unmade track through some woods. Follow this until you reach a car park. From here, there is a short footpath to the shore. The cliffs at Nacton are to the right.
♦ Ref: 52.00619°N, 1.22373°E

FIND FREQUENCY: ♦ – Nacton is very good for fossils, but most of them are washed from the cliffs at Levington (see our separate guide). Nacton itself has a small cliff with areas of exposed clay and shingle. Fossils are much rarer here than at other London Clay locations, simply because most of the foreshore can often be covered with grass and algae.
CHILDREN: ♦ – As fossils are rare here, so this location is not suitable for children wishing to collect fossils.
ACCESS: ♦♦ – Nacton is easy to get to, but the small cliff has a large number of trees and soft areas, and you will also have to climb over or under fallen trees. The cliff is the best area at Nacton, otherwise you need to walk east towards Levington. You can also find fossils on the foreshore at Nacton, which makes it more suitable for families.
TYPE: – When you enter the beach at Nacton, it becomes apparent that most of the rocks on the foreshore are glacial in origin. Therefore, you need to walk west, where there is a small cliff and patches of single and clay on the foreshore.

Echinoids and sponges can be found in the glacial flints when you first enter the foreshore. From the London Clay, sharks’ teeth are the most common finds, but fish, reptile remains and bivalves can also be found. The London Clay also throws up occasional other surprises, such as crustaceans, but these are much rarer. When you first enter the foreshore, derived fossils from the glacial beds can also be found.

Between the cliffs at Nacton and Levington, there is a small half metre cliff made of glacial deposits and flints can be seen covering the foreshore. As you walk west, the beds change to London Clay Ypresian age) , which also becomes exposed on the foreshore.

The cliff face shows a shaley stratification, with sub-horizontal (dipping slightly west) dark and yellow horizons. This is the lowermost unit at outcrop in the region and is the Harwich Formation, of the Thames Group, at the base of the London Clay, in the region of 55 Ma old.

The Harwich Formation contains volcanic ash, rich in feldspar, evidence of the newly opening Atlantic Ocean. Over 30 ash bands have been identified. It is mainly clay with calcite cementation, but also contains occasional boulders and mudstone nodules. The Harwich Formation comprises mainly bioturbated silty clays and sandy clayey silts with subordinate sandy silts and silty sands, some of which are glauconitic.

Fossils include marine invertebrates, especially molluscs, with birds and mammals Interestingly, in beds beneath this, there have been found fossil bones of the early horse, Hyracothia.

Common sense when collecting at all locations should be used and knowledge of tide times is essential. The London Clay often extends far out at low tide. The mud flats are extremely dangerous and areas of soft clay can take you by surprise. In the past, there has been one death as the result of a person becoming stuck in the sand and clay.

The best advice is to always tread carefully. If planning to visit during winter months, take a long stick to prod the ground before you walk on it. Stay away from the mud flats completely. If possible, take someone else with you and ensure you have a mobile phone.

The fossils at Nacton are usually found on the foreshore, but blocks of hard London Clay also contain fossils, so it is best to take a pick. However, for most fossils, you will only need good eyes for.

This site is an SSSI. This means you can visit the site, but hammering the bedrock is not permitted. For full information about the reasons for the status of the site and restrictions please download the PDF from Natural England – SSSI Information – Nacton