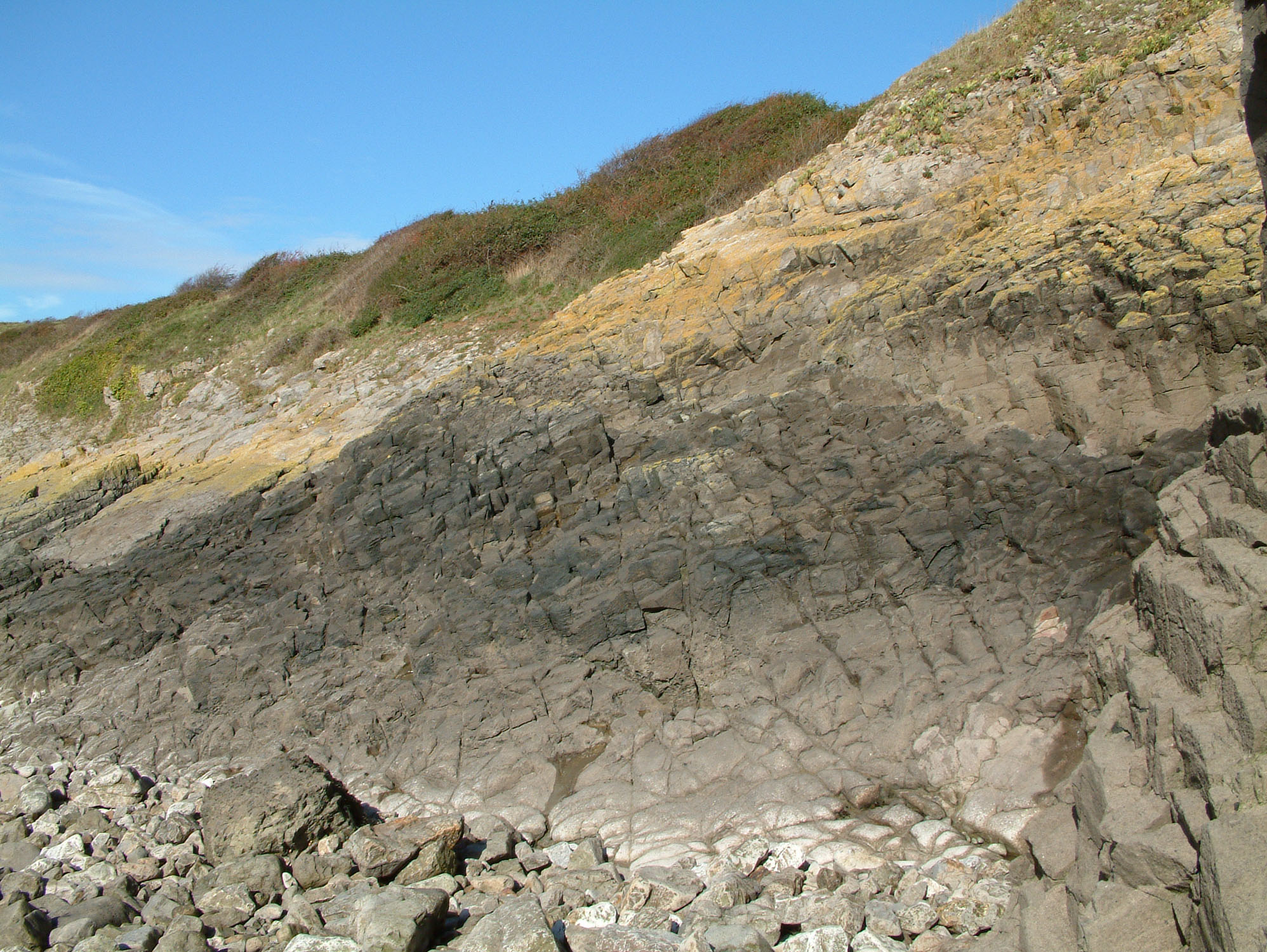 Weston-super-Mare is a fascinating geological location. Underwater volcanoes during the Carboniferous period sometimes buried life forms and preserved them in the rocks now exposed on the foreshore and cliff. Well-preserved corals, bryozoans, algae, bivalves and brachiopods can be found.

♦ Head towards the seafront at Weston-super-Mare. This can be accessed from the A370 off the main M5. Once you reach the seafront, follow the road north along the seaward side.
♦ You will eventually reach a toll road (at a sharp left turn). Keeping left, take this toll road and follow it round the seaward side. It will eventually take you to a car park at Middle Hope.
♦ Park here and walk west towards the salt marsh and coast. The salt marsh footpath can be quite boggy. Follow it until the foreshore changes from marsh to rocks and this is where the beds start. The best are further round Sand Point at Middle Hope.
♦ At Sand Point, there is very difficult terrain to cross. So, if you prefer, from the car park, walk north up the footpath to the cliff top and follow the path all the way round until it dips near Middle Hope, where you can also gain access to the beach.
♦ Ref: 51.38823°N, 2.97641°W

FIND FREQUENCY: ♦♦♦ – Fossils are plentiful along the foreshore in the rocks, but be aware of the site of special scientific interest (SSSI) restrictions at this site.
CHILDREN: ♦ – This coastline has very difficult terrain as the rocks are sharp and coarse. This location is for the fossil enthusiast and professional, and is not suitable for the beginner or families.
ACCESS: ♦♦ – Although parking is easy and access to the shore is not that difficult, their is firstly a short walk along boggy salt marsh to get to the cliff and then once that is achieved the whole coastline is hard going.
TYPE: – Coral and crinoid fossils are mostly found in the rocks on the foreshore, but can also be seen in the cliff face. The rocks are extremely hard.

Corals are the most common type of fossil you will find along this coast. The most likely ones you will see are Zaphrentis sp., which are cone-like corals and are found in many of the rocks, often in excellent condition. Crinoids can often be found, but these are, in most cases, worn with the inside structure only visible. Bryozoans and fossil algae make beautiful patterns on some of the rocks and brachiopods and bivalves can also be found.

Most of the fossils are found in the cliffs and large rocks on the foreshore, and can be seen along much of the coastline at Middle Hope, Swallow Cliff and Sand Point. The fossils are simply lying in the rocks, but, because the rocks are extremely hard, they will often break if you try to extract them. The SSSI restrictions means that there are plenty of good fossils to be seen in the rocks, left for everyone to see, photograph and enjoy, but restrict what you can collect (that is, loose fossils that would be washed away and/or damaged by the sea).

The geology of the area around Weston-Super-Mare is very complex and the coastal headland of Sand Point and Middle Hope, north of Kewstoke has been visited by geologists for over 200 years. The rocks are mostly Lower Carboniferous (Courceyan) Middle Hope Volcanics which forms a coarsening- and shallowing-upward sequence which records the development of a localised, probably non-emergent, offshore volcanic-high above the outer carbonate-ramp deposits of the upper part of the Black Rock Limestone.

The Black Rock Limestone represents the remains of a peaceful, coral limestone platform, where colonial syringopora and solitary zaphrentoid and caninioid corals, choenitid brachiopods, and crinoids made their home ~ 350 million years ago in a warm, shallow sea

Volcanic Ash preserved the fossils in these rocks by covering the life forms caught by the ash as it fell to earth. These thick, dense beds can be seen around Swallow Cliff and Middle Hope. Pillow lavas (from an underwater volcano) are exposed on the foreshore at Swallow Cliff.

Here lavas and ashes vividly recall volcanic eruptions that took place between 327 and 359 million years ago. There is abundant fossil life to be seen in the limestone rocks of that time and also a ‘raised beach’ dating from the Ice Age that shows higher sea levels in the more recent geological past. The raised beach with Macoma shell debris indicates temperate conditions. (Ipswichian Interglacial

There are two horizons of volcanic rocks in the Weston-super-Mare area, a lower one at Middle Hope (Black Rock Limestone) and a higher one seen at Spring Cove, near Birnbeck Island (Black Rock Dolomite).

The Middle Hope volcanic rocks are exposed at four locations on the north side of Middle Hope; the most westerly one being at Swallow Cliff. The sequence starts with Carboniferous Limestone containing crinoids, corals and brachiopods with chert and some evidence of bioturbation. Some of the corals are nicely weathered out. Moving up the sequence (the rocks dip to the south) brown, fine-grained, bedded ash (tuff) is seen, which is poorly lithified. It has a rusty colour as it is iron rich because of the basaltic nature of the volcanism. Above the tuff is a series of interbedded tuff and limestone. The environment would have been a shallow tropical sea (at this time the UK was approximately on the Equator) with periodic volcanic events. Succeeding the tuff is a layer of sandstone with symmetric ripples suggesting the role of wave or

tide in its formation. This is followed by bioturbated limestone with corals, then massive tuff with calcite veins and pillow lavas. hese are succeeded by massive limestone. 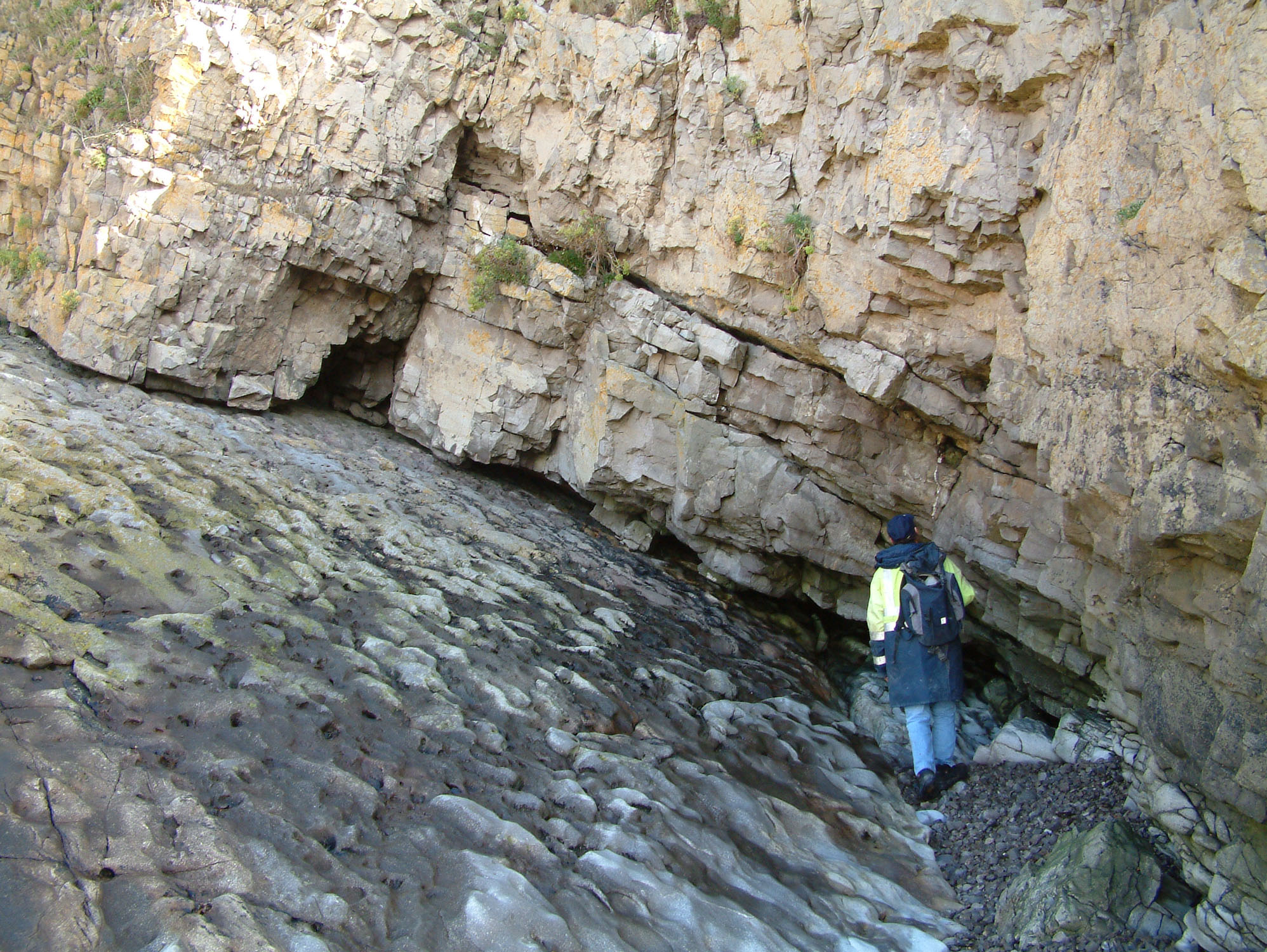 This stretch of coastline can be extremely dangerous, especially round Middle Hope headland. At high tide, the sea reaches a couple of metres high at the base of the cliff. Therefore, you must ensure that you return before the tide turns and always visit on a falling tide.

This site is an SSSI site, so there are restrictions on collecting and hammering. However, there are some wonderful fossils to be seen, so don’t forget your hand lens and camera.
The rocks are very slippery with crevices and are also very sharp and coarse. Therefore, good quality walking boots are recommended.

This site is an SSSI. This means you can visit the site, but hammering the bedrock is not permitted. For full information about the reasons for the status of the site and restrictions please download the PDF from Natural England – SSSI Information – Weston-Super-Mare