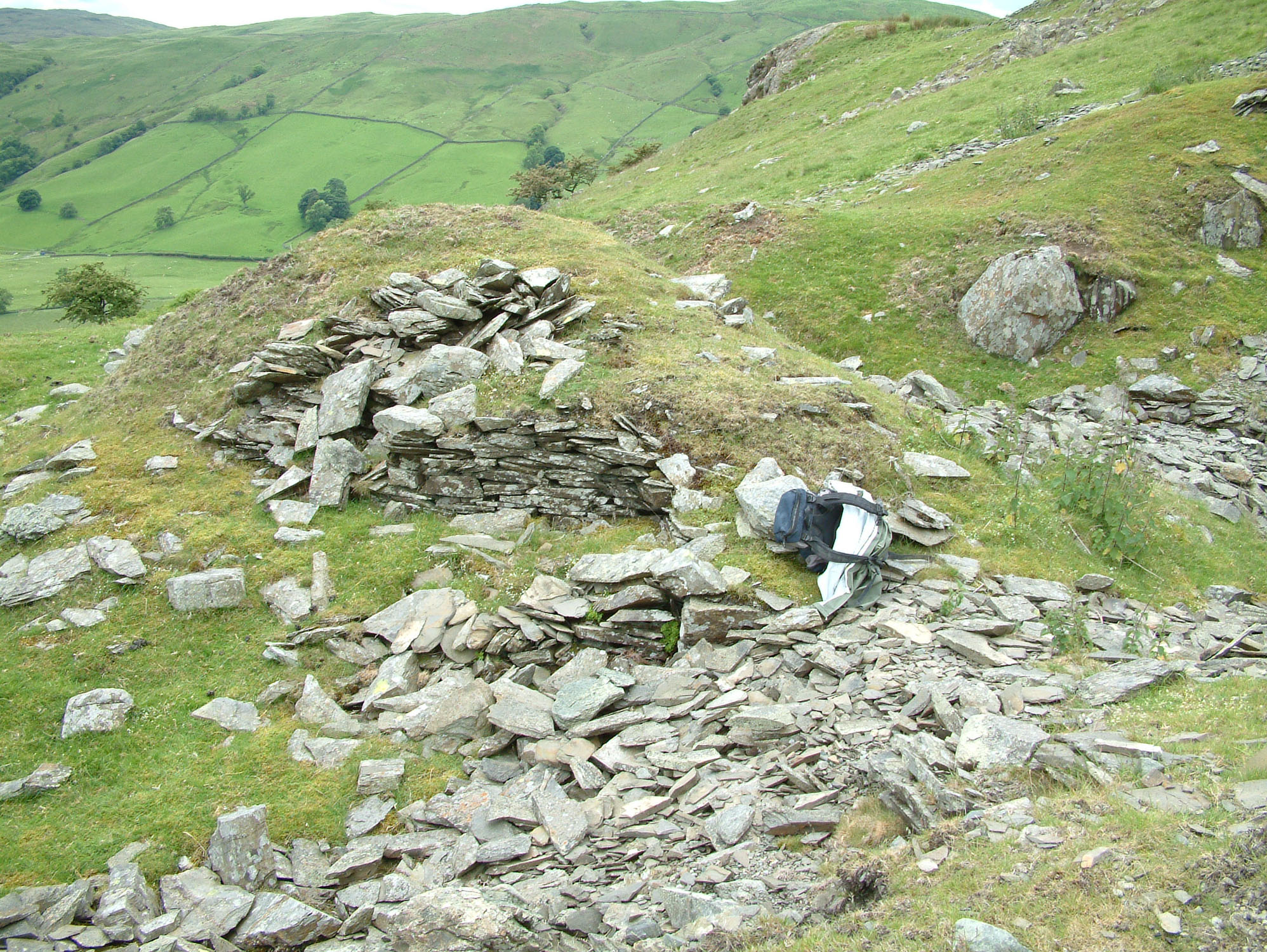 At Stockdale Quarry, Ordovician slates yield a variety of fauna including trilobites, corals, graptolites, brachiopods, bivalves and gastropods. This disused quarry is situated at the top of a large hill.

♦ From Kendal, follow the A6 north. Take the road to Longsleddale and then follow the road to Sadgill. This is a narrow, single track, which does not connect with any other road. In spite of this, it can be very busy with hikers, but there are some passing places along the route. The road seems to go on forever, but you need to look out for a small road on the right signposted ‘Stockdale’.
♦ When you reach Stockdale, there are spaces for two vehicles – one of the left hand side at this junction in a small layby and the second on the grass by the entrance. Make sure that there is enough room for farm traffic and mini-buses to pass. If no spaces are available, drive 800m further up the road until you reach a car park with a bridge and walk back south to Stockdale.
♦ Walk along the Stockdale track, which will pass through a farm and lead to an adventure centre marked by some old buildings. From here, you need to ascend the hill on your left to the top, where you will clearly see two quarries.
♦ Ref: 54.44775°N, 2.78658°W

FIND FREQUENCY: ♦♦♦ – There is a wide range of fossils to be found at this location, but the fossils are poorly preserved.
CHILDREN: ♦ – This location is not recommended for families. It can be a steep climb to the top of the hill.
ACCESS: ♦♦ – Stockdale Quarry is situated in the middle of nowhere, although the walk isn’t too bad. In addition, the road is a long, narrow single track road, which leads to nowhere. It is also very busy as it is popular with hikers. Parking for one car is available nearby or, if this is taken, you will need to walk a further 800m from the car park.
TYPE: – This location is a disused quarry, with access from a public footpath. The quarry is infilled with spoil, but there are plenty of fossils to be found.

At Stockdale Quarry, trilobites can be found, but all fossils are poorly preserved. Other common finds are gastropods, corals, bivalves and graptolites. Look for brown or orange coloured layers on the edges of the slates. There is no need to split rocks and, indeed, you are unlikely to find anything by doing so. Simply pick through the spoil and scree, and look for the brown/orange coloured tints. The best area to look is in the stack of slates. Unlike the other slates in the quarry, these are not weathered and fossils can be see more clearly. 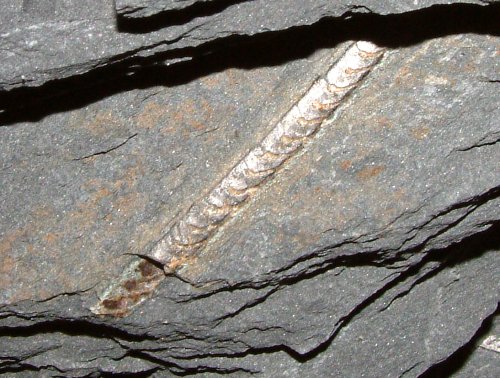 The rocks at Stockdale Quarry are part of the Dent Group (Ashgill Series) of the Ordovician and are a varied assemblage of shallow marine clastic lithologies and limestone, pyroclastic rocks and rhyolitic lava.

The Dent Group make up part of the Windermere Supergroup. (previously the Coniston Limestone Formation). The Dent Group was laid down about 445 million years ago after the Lake District volcanism had ceased. There was a marine transgression across the area caused by thermal subsidence as underlying granite cooled. The England area at this time was about 30o south of the equator. 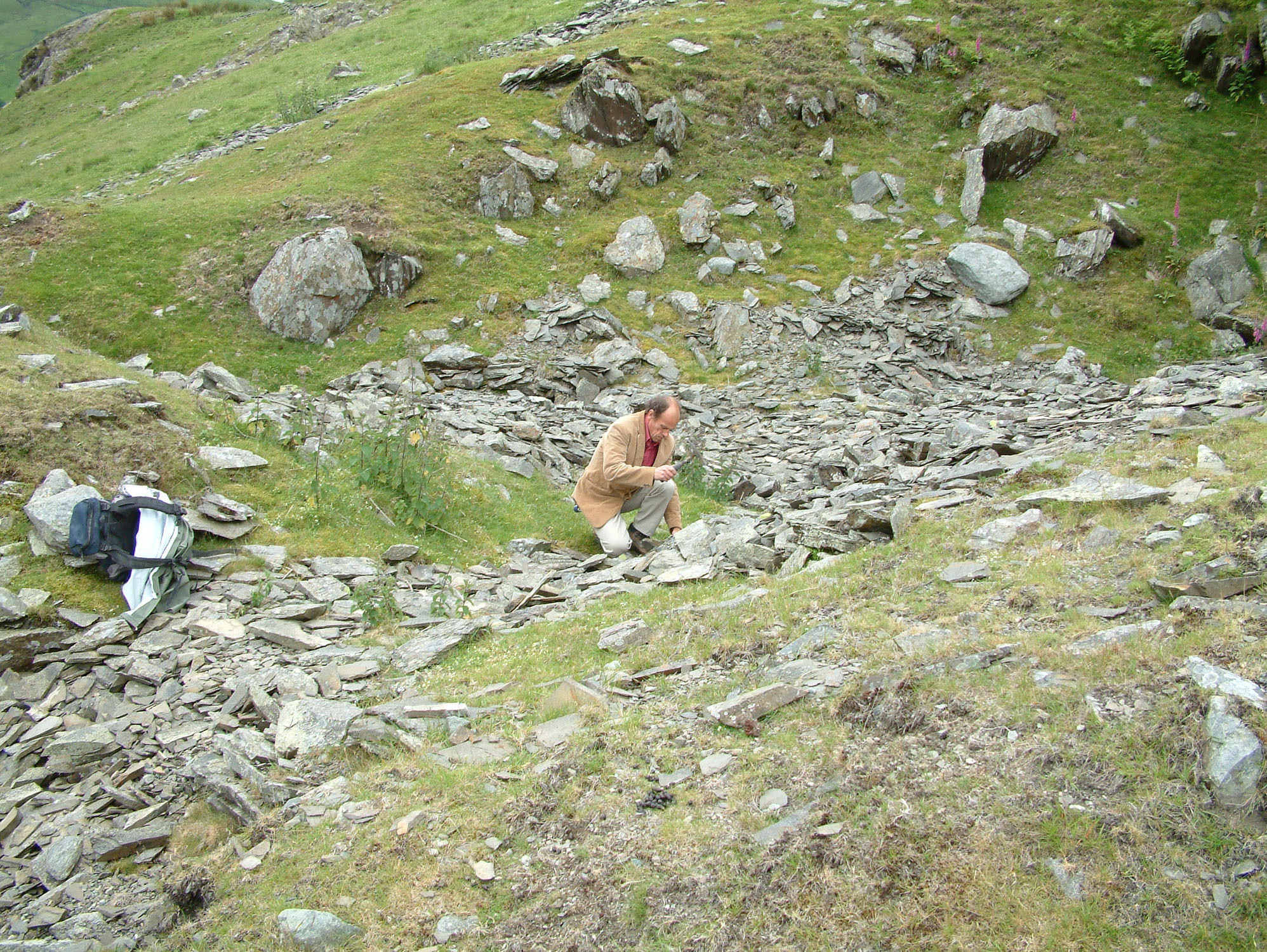 Extra care should be taken when crossing the large number of rocky outcrops during wet conditions, as they can be extremely slippery.

Most fossils are found simply by picking up slates from the scree and spoil heaps. However, you may wish to take hammers and eye protection to break down your finds to make them easier to carry back.

This site is an SSSI. This means you can visit the site, but hammering the bedrock is not permitted. For full information about the reasons for the status of the site and restrictions please download the PDF from Natural England – SSSI Information – Stockdale Quarry