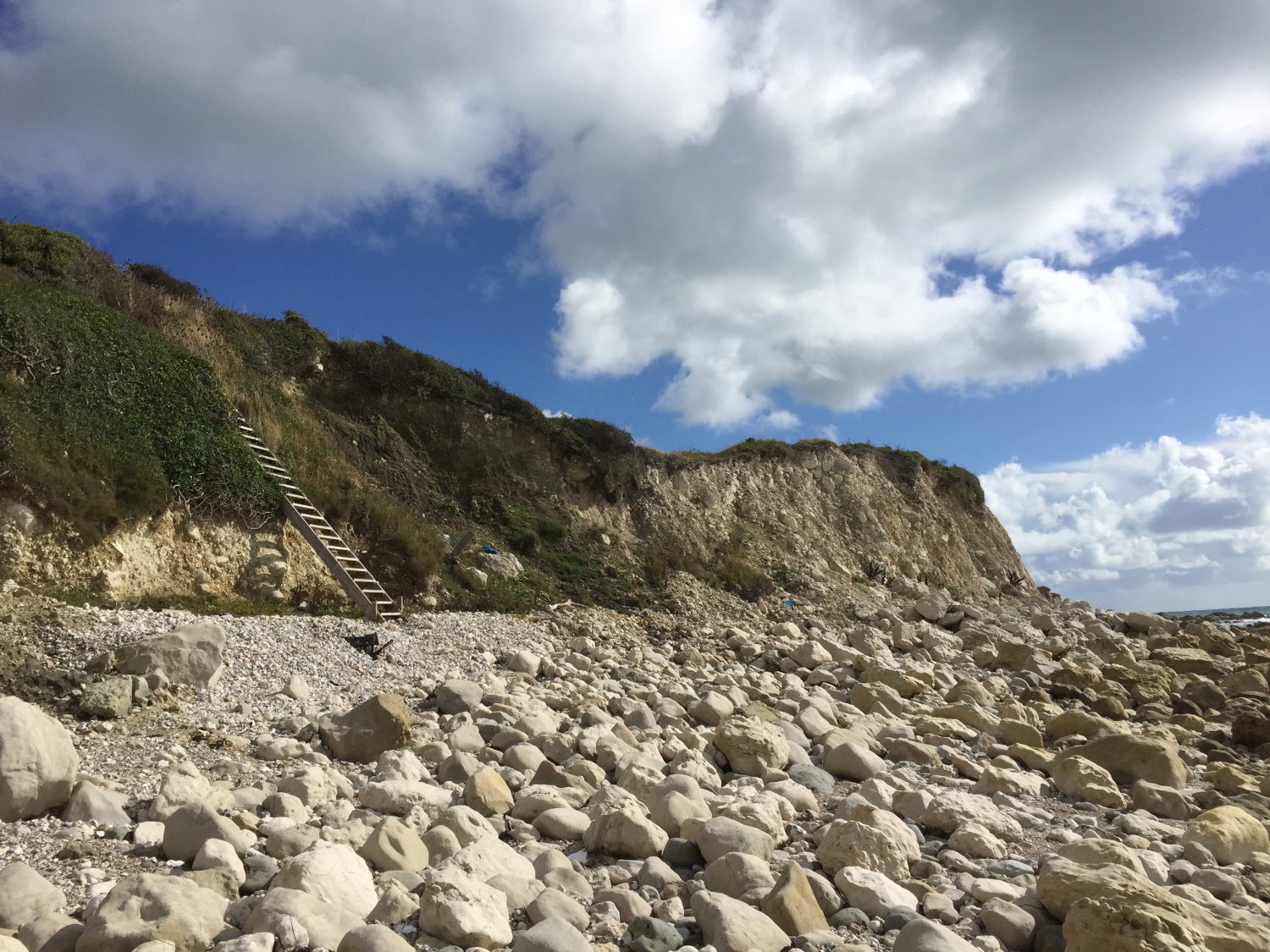 Where else might you go to collect fossils from almost the full Chalk succession, along with the Upper Greensand within just a few metres? This location, at the far headland east of Ringstead Bay, is superb for its geology but also for its Cretaceous ammonites, echinoids and other fossils.

♦ The old way of accessing White Nothe was through the field car park at Holworth House. However, this is no longer open and the nearest place to park at White Nothe is a fair distance away. Access is now best from Ringstead Bay, (clearly signposted), with easy parking and a beach cafe and then by walking east along the beach.
♦ The car park can be accessed from the toll road off the A353 to Ringstead. Follow the road and take a sharp right at the top of the hill. It will then take you to the low cliff where you will need to walk east. Ringstead is to the south of Poxwell.
♦ Ref: 50.62662°N, 2.32977°W

FIND FREQUENCY: ♦♦♦♦ – White Nothe is a location that is not often visited by fossil hunters, so there is often plenty to be found, especially after a high tide and /or storms. However, you really need the right conditions for any decent finds.
CHILDREN: ♦♦ – This location is probably not suitable for younger children because of the long walk from Ringstead Bay and the rocky foreshore.
ACCESS: ♦♦ – It is a long walk down to the beach and the rocky foreshore can be quite difficult. The car park is easy to find, being next to the Beach Cafe (clearly signposted from the A353).
TYPE: – Most of the fossils can be found on the foreshore, especially after storms, but fossils are also commonly found in fallen blocks of Chalk or Lower Greensand on the beach.

This site is part of the Jurassic World Heritage Coastline, so follow the Fossil Code of Conduct. It is also a SSSI, so hammering directly into the cliff and bedrock is not allowed. Damage has already been caused to the heritage site by people using power tools. This is strictly against SSSI rules and any attempt to ignore them may result in prosecution.

From the Chalk, echinoids (sea urchins) are probably the most common fossils and can often be collected by simply picking them up from the foreshore. There is a quite a variety of species, the most common being Holaster. White Nothe is also well known for giant ammonites, which are surprisingly well preserved. Many brachiopods and bivalves can also be found, along with sea urchin spines and pieces of crinoids.

In the Greensand, there are rich, well-preserved brachiopod and bivalve beds, which yield a great variety of species. Gastropods can also be collected, if the Greensand is freshly exposed on the foreshore, it is as soft as that of the Gault, but exposure to air turns it rock hard. During scouring tides, many very good molluscs can be collected in near perfect condition.

Southeast of Holworth House, which can be easily observed at beach level high in the cliff, there is a range of Lower and Upper Cretaceous rocks, consisting of Upper Greensand, Gault and Chalk. The fault at Holworth House dominates White Nothe giving rise to vertical sections of the Chalk group.

The Chalk is made up of the Grey Chalk Subgroup (with fine rhythmic banding and grey spiky flints, representing Thalassinoides burrows), at the base.  The Basal Bed consists of Glauconic Marl, followed by cycles of hard, slightly grey chalk and even greyer marls, with no flints present. These Basal Beds of the Grey Chalk Subgroup are Lower and Middle Cenomanian in age and both are represented within the Basement Bed’s 1metre thickness. The Basal Beds can easily be examined in fallen blocks at the base of the cliff and along the shore. It yields ammonites and abundant Holaster echinoids, especially Holaster subglobus, which is frequently found at its base.

The top section of the vertical cliff is formed of the White Chalk Subgroup: the Lewes Nodular Chalk and the Seaford Chalk Formations. The Chalk beds are at first nearly horizontal, but further east they begin to dip in the same direction, gently at first and then more steeply, toward a syncline at Middle Bottom. This section is not accessible without a boat and attempts to gain access to the next bay on foot is not possible.

Common sense when collecting at all locations should be taken and knowledge of tide times should always be noted. Ensure you visit during falling tide and return in good time as it is easy to be cut off from the tide. At White Nothe, many large boulders can make access very difficult and it is easy to trip or fall over. You should also keep away from the cliff faces.

The use of hammers is not allowed. Hard hats should be worn at all times, as the cliffs are unstable. Take plenty of drink and food if you are planning to do the full walk.