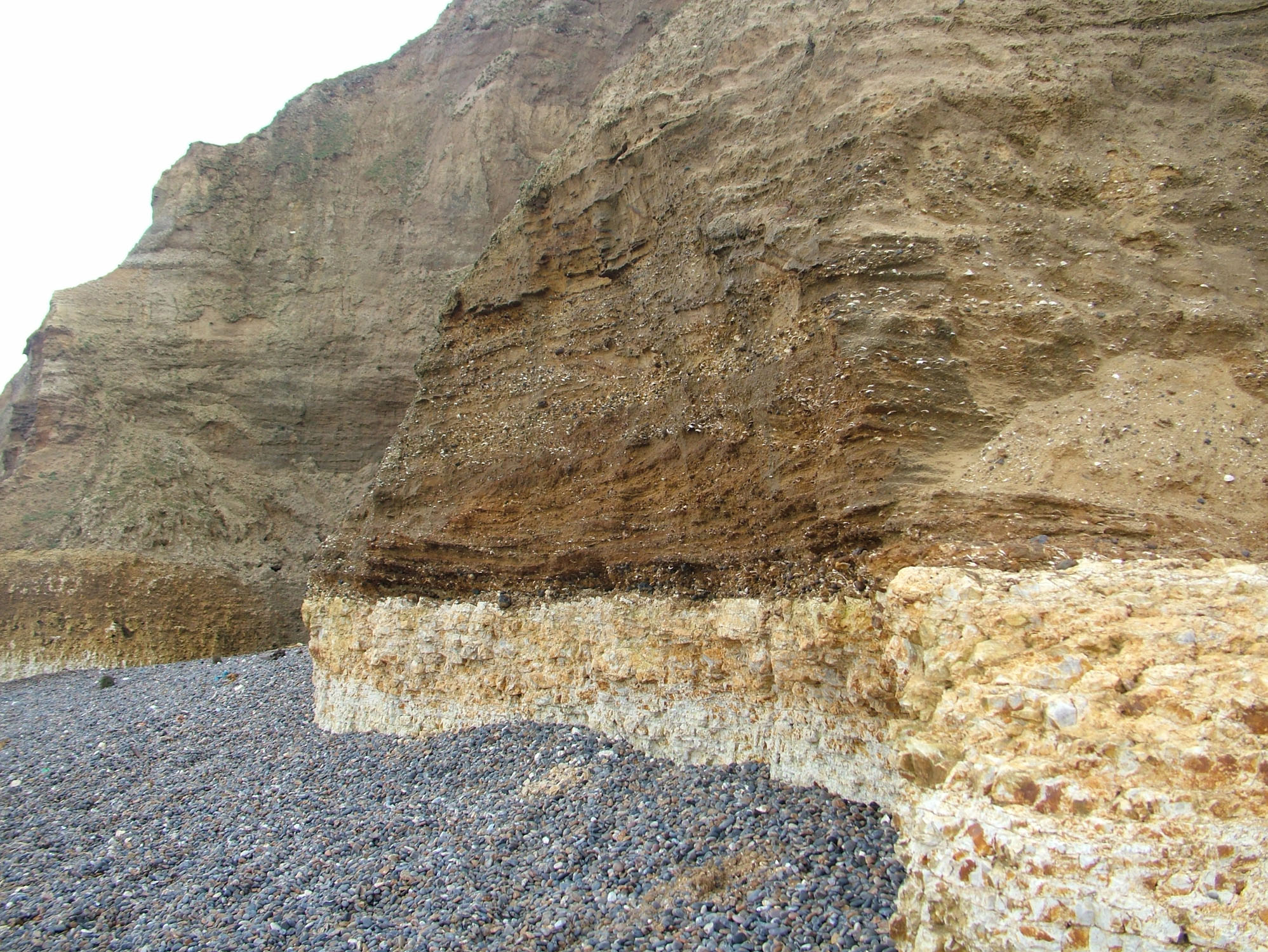 The chalk at Weybourne yields echinoids and brachiopods, but resting on this is the Wroxham Crag. This yields mammal and fish remains, along with a wide variety of molluscs in the thick shell beds and crag sands.

♦ Access to Weybourne is relatively easy. It is best to drive through Weybourne, past the windmill and down to the beach car park.
♦ From here, you can either walk along the beach east or directly over the cliff top and drop down at the other side walking west along the beach.
♦ Ref: 52.94891°N, 1.13993°E

FIND FREQUENCY: ♦♦♦ – Weybourne can be a very productive site. Of course, fresh cliff falls are ideal, but if there has not been a recent one, you should still be able to find some specimens in the chalk cliff face.
CHILDREN: ♦ – Weybourne is not suitable for children. It is a long walk on a very stoney beach, which often forms steep ridges of pebbles, making it very hard going. The fossil bones and shells usually require climbing above the chalk ledges, which can often be up to two metres high.
ACCESS: ♦♦ – There is parking nearby at the Weybourne Hope car park, but, unfortunately, it is quite a long walk to get to the fossiliferous beds.
TYPE: – Weybourne is a cliff location and fossils are mostly found in the cliff face. However, it is best to keep away from the base of the cliff and collect from the foreshore.

Echinoids (Echinocorys scutata) can be found in the chalk. These are often poorly preserved and can be crushed or broken, but occasionally complete and unbroken specimens can be found, which are quite large. Bivalves (Ostrea vesicularis), brachiopods (Cretirhynchia limbata), sea urchin spines (Tylocidaris clavigera) and belemnites (Belemnitella) can also be found. The best fossils – sea urchins (Micraster) and sponges – which can be collected between Weybourne and Sheringham from the foreshore during scouring conditions. Large mammal remains, such as deer, whale, mammoth and horses, can be found in the Wroxham Crag. However, these are rare and are quickly taken by collectors. Smaller mammals, such as voles and shrews, can be collected from the shell beds, which is best done by taking samples home for wet sieving with a 0.5mm aperture. Fish and bird remains can also be collected from the Wroxham Crag.

The Upper Chalk at Weybourne yields echinoids and bivalves that can be found towards the eastern end of Weybourne Hope. The chalk at the western end is mostly unfossiliferous. You can walk along the base of the chalk and look for any fossils. Once you find one fossil, the chalk zones run horizontally, so search along the same height line. However, some of the best chalk fossils at Weybourne are found in the foreshore chalk. Sadly, this isn’t exposed very often and you will need a low tide and scouring conditions. If you see chalk exposed on the foreshore, make the most of it.

For mammal and fish remains, these are found in the Wroxham Crag above the chalk. Often, it is very difficult to access this, but the rain often washes off the glacial and softer Wroxham Shell beds above and leaves a shelf with Wroxham Iron Pan exposed onto the chalk. If you can get on top of this shelf, it is possible to walk along on top of the chalk and search for fossils. Most of the mammal remains are found this way.

Small mammal remains are mostly found by sieving. If you take back samples from the softer Wroxham Shell Bed, which is above the iron pan, this bed is full of mammals, such as voles and shrews, but can also contain fish and bird remains, along with a wide range of freshwater animals.

You can also walk along the base of the cliff and check for any bones exposed in the iron pan. If you find any, the best method is to create foot-holes using a pick. Sometimes, collectors leave ladders lying around to make this easier.

The uppermost beds at Weybourne are glacial. These are followed by the Wroxham Crag Formation from the Pastonian and Pre-Pastonian Stage, which consist of thickly bedded shell deposits and iron-pan that rest on the White Chalk Subgroup. The Wroxham Crag formation is a marine deposit of interbedded gravels, sands, silts and clays, the coarser strata often being very iron-stained.

The White Chalk Subgroup is from the Campanian and is marked by the Echinocorys scutata zone, which contains a lot of flint.

Common sense when collecting at all locations should be used and knowledge of tide times is essential. The main issue at Weybourne to consider is the tide, as it is easy to be cut off. Care should be taken if climbing onto the iron pan, especially after high tides or heavy rain, when the above soft material and chalk becomes very slippery.

It can be a long walk along a difficult beach to get to the best beds at Weybourne and the pebbles can make walking difficult. Hard hats and hiking boots are recommended. You should take a pick for the chalk, along with paper, since the echinoids here are very fragile. For the Wroxham Crag and Forest Beds, you will need a knife or pick, and a small spade. Bones will often need treating on site, so a PVA solution (one part PVA to three parts distilled water) is recommended.