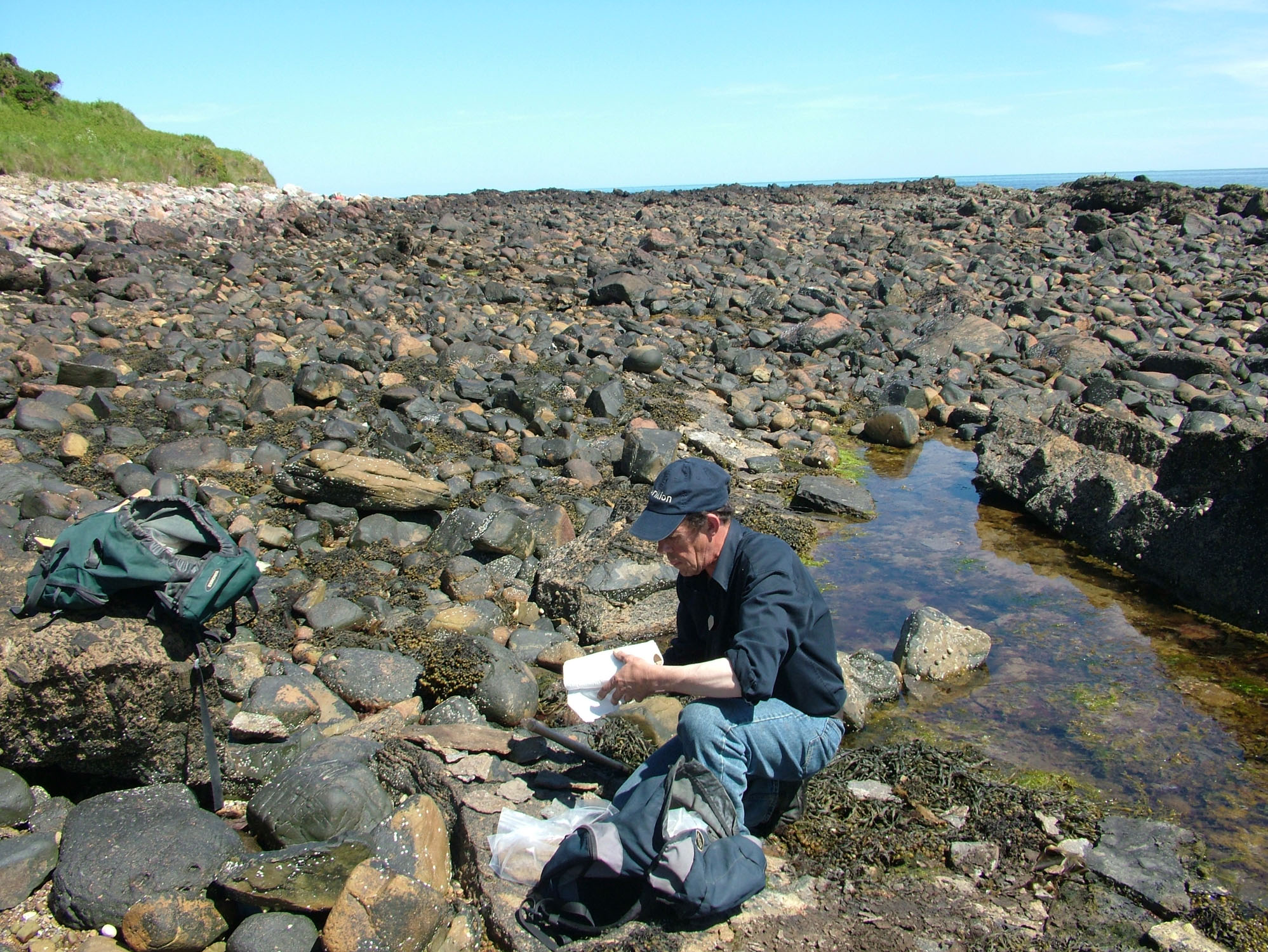 Helmsdale is the best place to collect Jurassic fossils in Scotland. Geologists have been fascinated by the strange ‘Boulder Beds’ for many years and some questions have remained unanswered as to how the beds were formed. The area is rich in reptile remains, giant corals, fish remains and the occasional ammonite.

♦ Heading up the A9 towards Helmsdale, cross over the bridge at Helmsdale and, directly after there, is a road turning left. Take this and following it down, taking the first road on the left and follow this under the bridge that you originally crossed. You will then reach the harbour.
It is best to park here in the main car park and walk north across the beach (this is quite a long walk). To avoid the rocky foreshore, you can also walk down a turning left from the car park, towards a row of houses. (This the last turning before you reach the end of the harbour.) At the end of this road is another, narrow road. Follow this and there is access to the beach at most places along the road.
♦ There is a path along most of the coastline at Helmsdale, with access to the beach in the majority of places. Therefore, if, on your return, you want to avoid the rocks, you can walk along this path.
♦ Once on the foreshore, head north, examining the rocks as you go.
♦ Ref: 58.11951°N, 3.62861°W

FIND FREQUENCY: ♦♦♦♦ – The Jurassic rocks here are highly fossiliferous and rich in reptile remains. The foreshore is also rich in beautiful and large corals, which there are plentiful.
CHILDREN: ♦♦♦♦ – Helmsdale is ideal for families. It is near to shops, with excellent parking facilities, beautiful views and has plenty for all to do. As well as collecting fossils, the beach is teaming with life in rock pools, so this is also ideal for children.
ACCESS: ♦♦♦♦ – This location provides excellent access to the beach. Although the shores are rocky, you do not have to walk far and there is a car park at the harbour.
TYPE: – All of the fossils are found on the foreshore. There are areas of cliff further north from Helmsdale, but these are not fossiliferous.

Helmsdale is unpredictable. The foreshore contains patches of Kimmeridgian Shale, with cementstones above and then mixed deposits of both. The geology is certainly strange and has mystified geologists for years. The best areas to search are those where bands of cementstone and shale have been clearly separated. Look out for gigantic corals, which can be found in situ or simply lying around the foreshore. You often have to dig the corals out of the clay. These are also often well hidden among other rocks and seaweed, not just in the areas of exposed clay.

The fossiliferous beds stop at a headland, where they change to very black, rough rocks. You will need to continue past this area, to where the fossiliferous beds begin again. These are marked by bands of shale and cementstone, and patches of Boulder Beds. Here, the fish beds are well exposed, which contain fish remains, vertebrae and other bones in a thin thick crust resting on top of Kimmeridge Shale. You can split these later at home, because more bones and fish fragments can often be found.

Helmsdale is also famous for its giant corals, which can simply be picked up from the foreshore. There are plenty around and you are almost guaranteed to come home with at least one large, well-preserved coral. Look out for bones and ammonites in the shale. Some of these are washed out and can be found lying around the beach in the shingle. You can also find fossils in the mixed-up Boulder Beds, where both shale, cementstones and other rocks have been deposited in a very hard, uneven bed.

Have a very good look at the Kimmeridge cementstone beds, between the bands of shale. These can contain bryozoa, corals, sea urchins and their spines, fish fragments, jaws and vertebrae from reptiles, ammonites, belemnites, shells, corals, and much, much more. The bone-bearing beds are very different to the fish and fresh water beds, the surface of which is covered in corals and fish remains. Due to the Helmsdale fault, it is hard to separate zones, as these start and stop randomly across the foreshore; if you find a good bed, the chances are that just meters away, it will vanish completely.

Finally, keep an eye open for Devonian rocks from the Helmsdale Fault, as these have yielded complete fish. However, these are very rare. They can be found within the fallen ‘stacks’, which contain Devonian rocks mixed within the Jurassic. You may find these further along, past the second area of Kimmeridgian bands.

The Jurassic rocks of Helmsdale are from the Kimmeridgian stage. The narrow outcrop of Kimmeridgian strata here represents almost the youngest part of a virtually complete Jurassic succession that is probably over 2 km thick, one of the thickest in the UK. At Helmsdale, bands of shale and cementstone are exposed on the foreshore. A massive fault known as the ‘Helmsdale Fault’ makes this one of best locations in northern Scotland for collecting Jurassic fossils.

The Kimmeridge sediments exposed here are extensive, with unique beds known as the ‘Boulder Beds’. These are hard, uneven layers of various Kimmeridgian rocks, broken cementstones and shale. The layers are totally unpredictable and can appear suddenly, although zones have been identified, which change as you walk north.

They are now believed to have been deposited at the foot of the Jurassic submarine fault scarp of the Helmsdale Fault. In this respect, after the years of erosion, it is clear that something major happened at Helmsdale millions of years ago; something with enough power to rip apart the rocks, not a slow movement but a sudden movement. Clear zones of cementstone and shale can be found at the base of the Boulder Beds, marking the ‘undisturbed original geology’. Resting on top are the Boulder Beds, which fell during this erosion, often in complete stacks. One theory is that tidal forces (or possibly tsunamis) caused massive cliff falls along the coast, with stacks falling onto the lower beds.

Common sense when collecting at all locations should always be used and prior knowledge of tide times is essential. However, you cannot become cut off until you reach the small cliff past the first fossiliferous section. From here, you must return before the tide turns, as it always reaches the base of this small cliff. Once past the next headland, it can be very misleading, as you cannot see the small cliff, even though it may appear as though the sea has a long way to come in. The foreshore is also very rocky, so take care when walking around.

During the summer, many birds nest on the beach, in particular oyster catchers. Therefore, take extra care where you walk for the young chicks. You will get plenty of warning from the parent birds, who will circle and scream at you until you get out of the way. There are also many other birds that nest on the beach here. Think about the wildlife before you think about the fossils.

Some fossils can be simply picked up from the foreshore, while others are set in extremely hard limestone layers and still more are set in clay. For that reason there are quite a few different tools you may need, including blunt knives, and hammers, chisels and safety goggles.