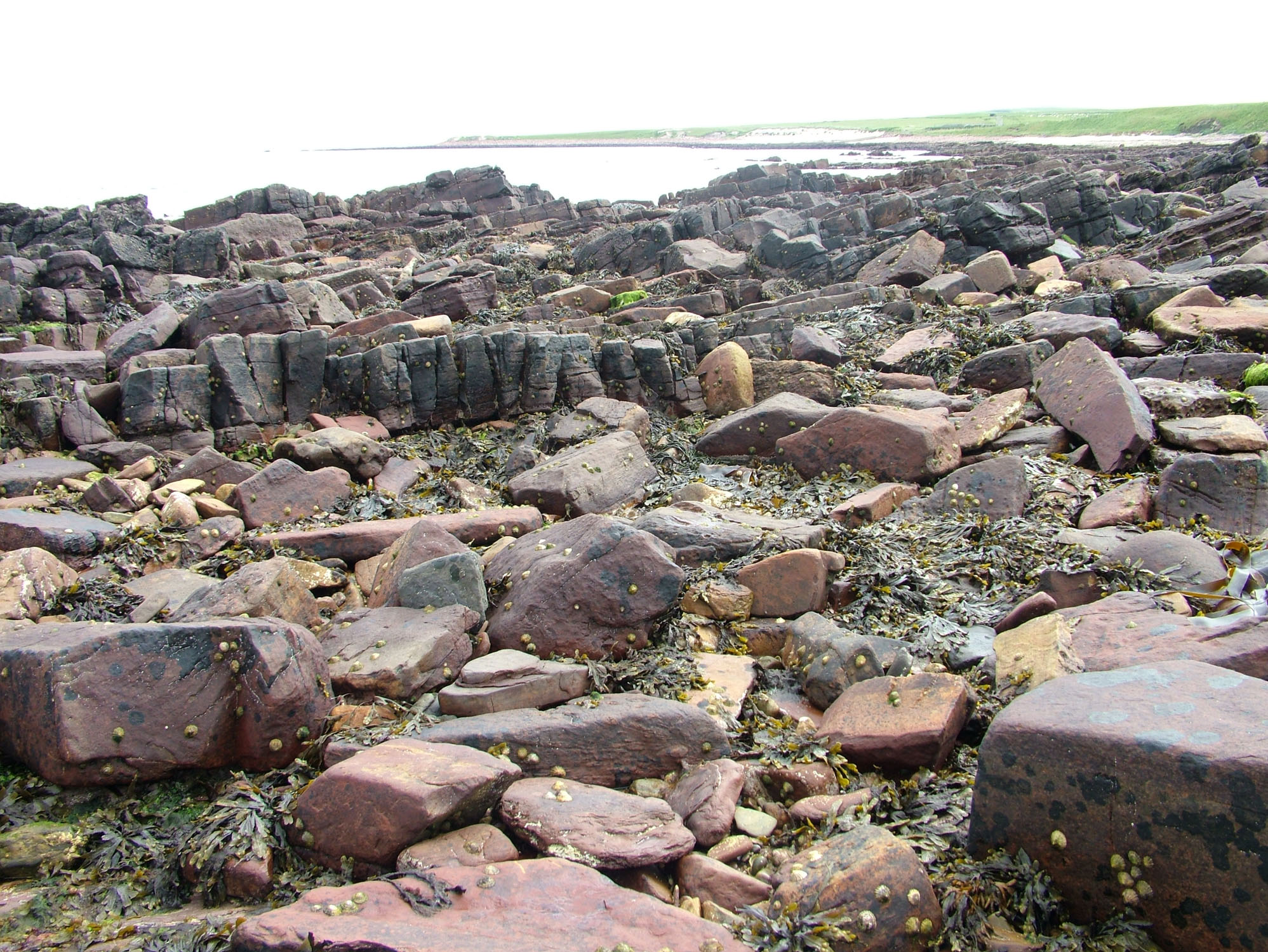 This location is most famously known for being the furthest point in the northeast of the UK mainland. This location is actually highly rich in fish remains (especially large fish scales) from Middle Devonian, John O’Groats Sandstone Group.

FIND FREQUENCY: ♦♦♦♦ – There is approximately 5m of highly fossiliferous rocks on the foreshore, which are full of fish remains and scales. If you can find this layer, and providing it is not covered up, you will find plenty of large superb fish scales.
CHILDREN: ♦♦♦♦ – This location is suitable for families and not just for its fossils. Most people come here to be able to say that they have been to the most extreme, northeast point of the mainland of the UK.
ACCESS: ♦♦♦♦ – From the car park at John o’Groats, the foreshore is a short walk away. The fossiliferous rocks are also only a short distance from the car park.
TYPE: – Fossils can only be found within rocks on the foreshore. There is an approximately 5m-thick band of rock, which is full of large fish scales.

You can find fish remains at John o’ Groats, but these are mostly extremely large scales. Often, you can split a layer and it will be packed with scales and other remains. Therefore, it is best to take a large lump of rock back home and leave the scales in the block.

The John o’ Groats Fish Bed is about 365m northeast of the John o’Groats Hotel and runs for about 5m along the foreshore. The beds run vertically, so you have quite a large section to search through. To start with, the fish remains are hard to see, since they are worn or dirty on the surface. However, if you look carefully, you may see pink or white shinny marks. Use a pick to split the layer, which should be full of scales. Once you start to see them, you will notice scales all over the place.

This location is the best site for the highest Mid-Devonian fauna in Caithness.

The area is the type locality of the John O’Groats Sandstone Formation and is of Givetian age. The sandstone is red, with sporadic bands of flagstone, thin impure limestone and shale.

This section also provides access to important Old Red Sandstone sections to the east at Ness of Dunscansby and Dunscansby Head. The John O’Groats Fish bed outcrops on the foreshore about 365m northeast of the John O’Groats Hotel. This has yielded complete fish remains, including Tristichopterus alatus, Pentlandia macroptera, Microbrachius dicki, Watsonosteus fletti and Dipterus sp.

The Fish bed comprises light-grey varved laminites, more calcareous at the base, with scales, fragments and occasional complete fishes, which are more common in the upperpart of the bed, in siltier and better laminated siltstones. 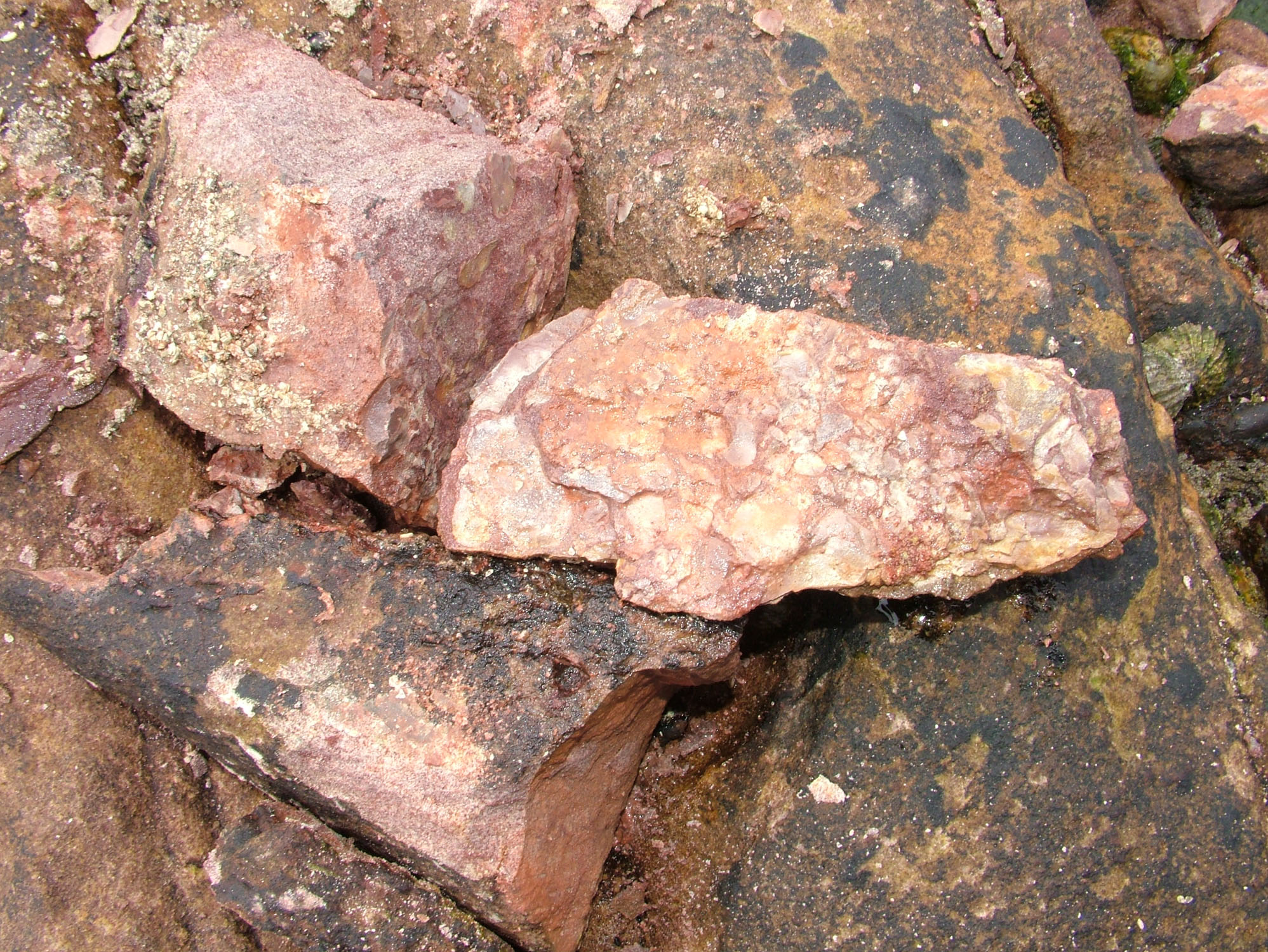 Common sense when collecting at all locations should always be used and prior knowledge of tide times is essential. Wear suitable footwear.

The fish remains at John o’Groats are found on the foreshore. Therefore, the best tool to take is a pick.