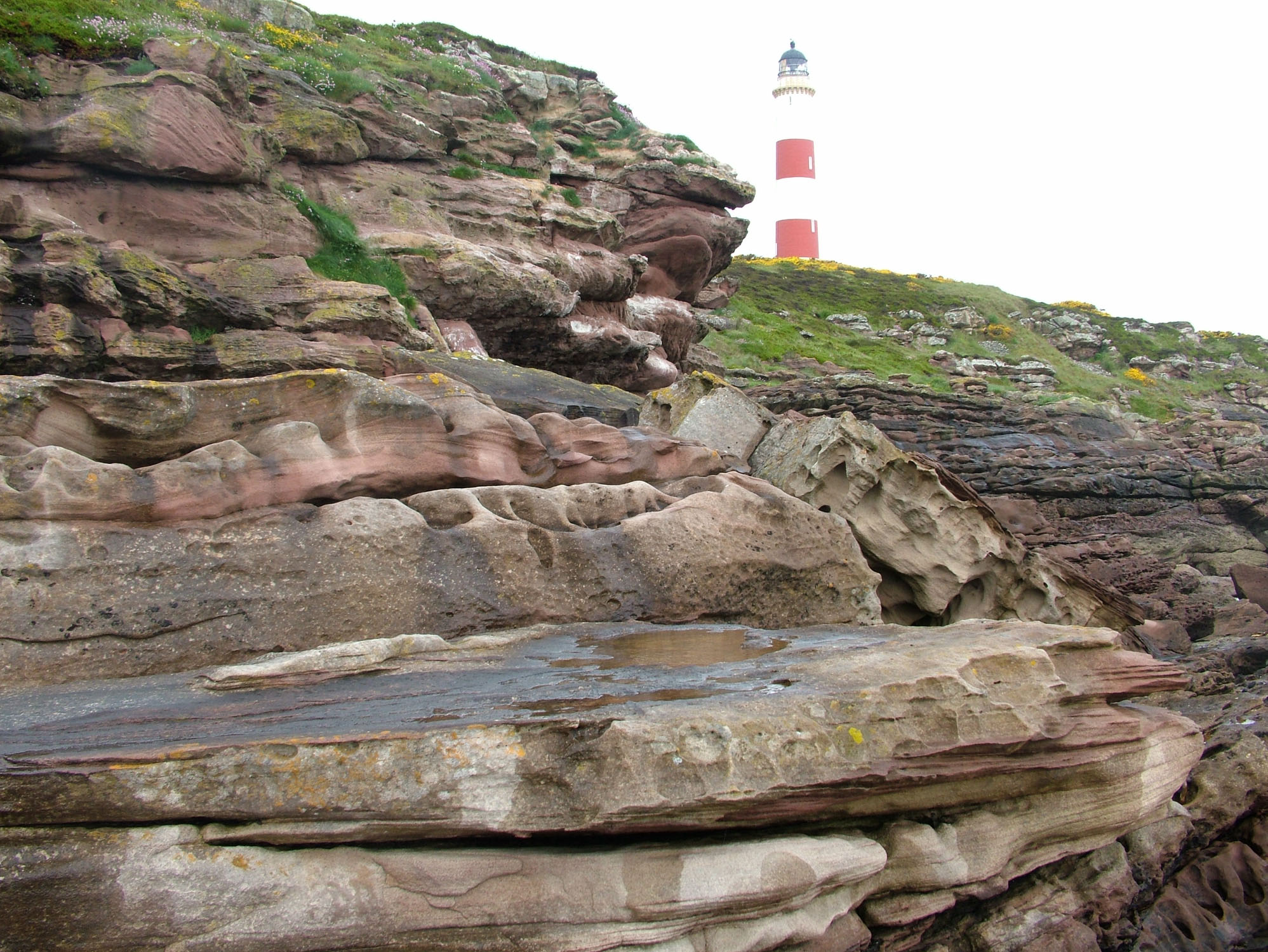 At Tarbat Ness, the Devonian rocks can contain small fish remains. Scales can be seen on ledges at the headland within a pebble bed. Larger fish fragments can also be found, but are less common.

♦ Tarbat Ness can be reached by a narrow ‘B’ road. This is the only route for cars and heads directly to the car park near the lighthouse.
♦ Here, you can park and walk through the back of the car park to gain access down to the foreshore. However, access can be difficult, because the path is steep and slippery down the cliff.
♦ Ref: 57.86286°N, 3.77884°W

FIND FREQUENCY: ♦♦♦ – Fish remains are not that common and often consist only of small scales.
CHILDREN: ♦♦♦ – This location is not suitable for a family day out, because of the rocky foreshore. The low find frequency also makes this location one for more serious, hard-core collectors.
ACCESS: ♦♦ – From the car park at the top of Tarbat Ness, access to the shore is difficult. The path down to the beach is both slippery and steep.
TYPE: – The cliffs at here are Devonian. Fish remains are found within the ledges, which dip from the cliff face.

Tarbat Ness forms the southern headland of the Dornoch Firth and juts out into the Moray Firth in a north-easterly direction. It is composed mainly of a peninsula of Upper Old Red Sandstone, separated from the underlying Middle Old Red Sandstone by a fault in the east and south.

The cliff and foreshore on either side of Tarbat Ness provide a good exposure through part of the Strath Rory Group of the Middle Devonian (comprising fluvial sandstones, with thick conglomerates and subordinate calcareous fish-bearing shales), the upper boundary of which is drawn at an unconformable upward passage to the yellow and red sandstone of the Balnagown Group of the Upper Devonian.

The sandstones of the Strath Rory Group are cross-bedded on a large scale and contain interbedded mudstones. These contain the occasional carbonate concretion, some of which have yielded fish fragments. These particular fossils suggest that the age of the mudstones is Eifelian – Givetian.

Common sense when collecting at all locations should always be used and prior knowledge of tide times is essential. The tides reach the base of the cliff at Tarbat Ness. Therefore, ensure you return well before high tide. The foreshore can also be very slippery and rocky. Wear suitable footwear and take care when climbing onto the ledges.

Fish scales at Tarbat Ness come from the pebble bed. This is generally quite soft, so a trowel comes in handy