Cloughton Wyke is an excellent location for finding plant remains. The beds are rich in a variety of flora and collecting is fairly easy. Bivalves can also be found here, along with trace fossils, such as ripple marks and burrows.

FIND FREQUENCY: ♦♦♦ – Cloughton Wyke yields excellent plant remains, but you will have to work for them. Be sure to take a hammer and chisels to split the beds.
CHILDREN: ♦♦ – This location, although easy to access, has a rocky foreshore and so may not be suitable for young children.
ACCESS: ♦♦♦ – Parking is at Cloughton Wyke car park. From here, the walk is not too bad to the shore.
TYPE: – Most of the fossils can be found within the boulders on the foreshore, but they can also be found in the layers within the cliff face.

The first area to examine is north of the car park. This is where bivalves, brachiopods and gastropods can be collected on the foreshore. Simply look for the Lebberston Member. This has three layers of shelly calcareous sandstone and sandy limestone. The middle layer is the one that is highly rich in shells.

The most common find at Cloughton Wyke consists of shells and there are many species to be found. These include the bivalves: Arcomya elongata, Lama duplicata, Entolium demissum, Pleuromya beani, Trigonia sp, Pholadomya saemanni Modiolus imbricatus, Pecten and Ostrea. South of Cloughton Wyke, you can also find plant remains on the foreshore and in nodules.

The shore at Cloughton Wyke is where the Gristhorpe Member (Bajocian 177-170 Mya)  of the Cloughton Formation is exposed in the cliffs, containing sandstone bodies of uniform thickness and medium grain size. Plant fragments and plant rootlets are common in some beds. These sandstones were planar bedded with the top 10cm ripple cross bedded and their bases display gutter casts. The sandstone bodies extend 6-8 km inland north to Ravenscar.

On the north side, you will see the Lebberston Member (known formerly as the Whitwell Oolite and/or the Millepore Bed) of the Cloughton Formation represented by a three-metre thick bed, which forms reefs running southeast into the sea. The middle part of this is the most fossiliferous, containing many types of bivalve (eg Pholodomya saemanni and Pleuromya beani). The Lebberston Member is formed of a massive sandy limestone with the bryozoan Haploecia, crinoid tem ossicles, and shell fragments including Arca type bivalves. The sandy limestone is capped by irregular blocks of iron-stained beach rock and is overlain by tidal muds and sands, partly wave-worked.

A variety of trace fossils can be found in blocks of Scarborough Formation, also of the Ravenscar Group, fallen from the cliff above. 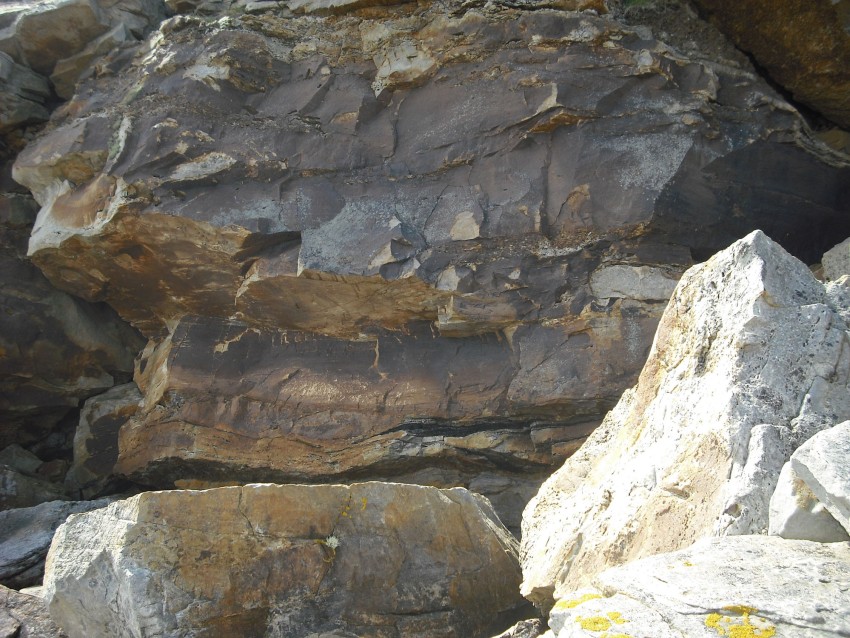 Common sense when collecting at all locations should be used and knowledge of tide times is essential. Keep away from the cliff face, as falls can be quite common along this coastline. It is also very easy to get cut off from the tide, so ensure you return before the tide turns.

Most of the fossils are found by splitting rocks that contain the plants. You will need hammers for this trip.