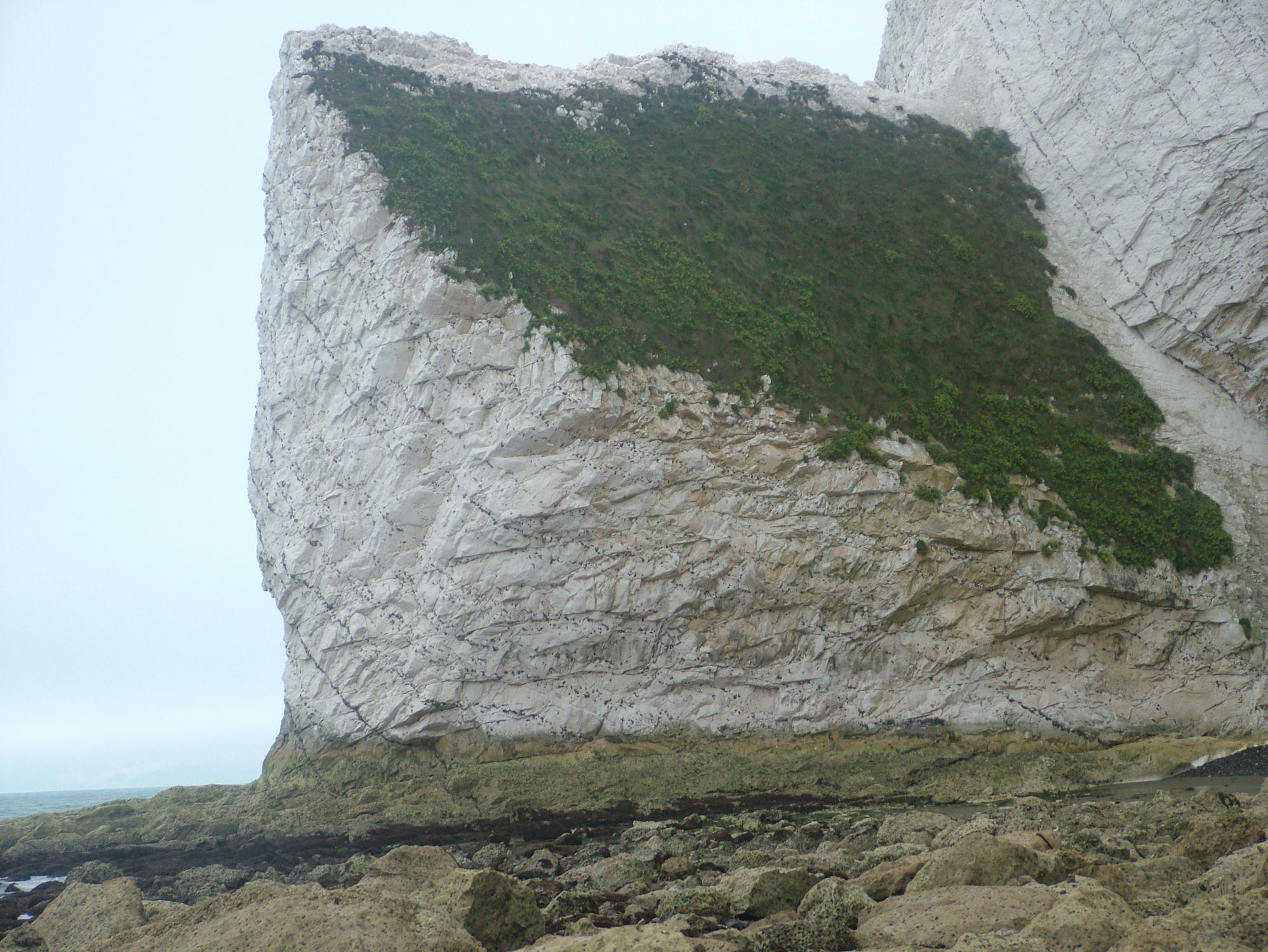 The huge cliffs of Culver Cliff can yield some superb sponges and large echinoids, with occasional fish remains. However, collecting from this location can be dangerous and difficult. Extreme care must be taken at all times.

FIND FREQUENCY: ♦ – There is a fairly low chance of finding fossils here. The foreshore is often covered with sea weed and there is little in the way of boulders or scree slopes to search for fossils.
CHILDREN: ♦ – Culver Cliff is a dangerous location and is not recommended for children or family trips.
ACCESS: ♦♦♦ – Access to Culver Cliff is from Whitecliff Bay. It is easy access, but, once at Culver Cliff, the foreshore is very slippery. At Whitecliff Bay, parking, toilets and a cafe are available.
TYPE: – Most of the fossils are found on the foreshore. You simply pick them up, but they can also be found in the cliff.

Starting from the west end of the Bay, the Upper Chalk of Culver Cliff yields excellent sponges, such as Porosphaera. Echinoids, such as the small Echinocorys subconicula, and belemnites (Belemnitella mucronata) can be seen from the Portsdown Member. This is at the top of the succession, so it is best to search the rocks that have fallen from this thin marl bed. Occasional fish remains can also be found.

Collecting fossils from Culver Cliff can be very difficult, with echinoids being the most common find, which can be found on the foreshore. The best place to search is along the chalk boulders at the end of Culver Cliff to the west of Whitecliff Bay.

Culver Cliff is an important and well-exposed locality cut in steeply-dipping Chalk belonging to the Coniacian, Santonian and Campanian Stages. This is one of the few British Chalk sites which provides exposures well into the Campanian Stage and is of great research interest

because of this and the near-complete accessibility of the whole sequence. The site is six closely-spaced mineralised hardgrounds which are typical of the condensed sequence seen in the Chalk of the eastern Isle of Wight.

The exposure at Whitecliff Bay Whitecliff, Isle of Wight, is an extraordinary site, forming a continuous north–south dip section exposing some 300 m of Chalk from the Upper Turonian Substage at ‘The Nostrils’ at the southern end, to the Upper Campanian Substage beneath the Palaeogene unconformity at the northern end.

The Chalk dips steeply north at 70º and each bed is exposed in turn over a relatively short distance. The only access to the section is from Whitecliff Bay

Collecting well-preserved fossils is difficult in this section. The Culver Chalk is particularly barren of macrofossils, but large forms of Echinocorys occur in blocks from themtop of the Newhaven Chalk Formation. The Lewes Nodular chalk provides the inoceramid bivalve Cremnoceramus waltersdorfensis and the echinoid, Micraster normanniae.

Common sense when collecting at all locations should be used and knowledge of tide times is essential. This can be a very dangerous location. The huge cliffs here are constantly falling due to the bedding plains, which are vertical in places. The foreshore is very slippery and rocky, and the sea does not go out very far. It also always reaches the cliff at high tide and it is very easy to get cut off from the corner of Culver Cliff, just before Whitecliff Bay.

Extreme care must be taken at all times.

Most of the fossils can be picked up off the foreshore, without the need of any tools. However, it is best to take a few, which may come in useful.