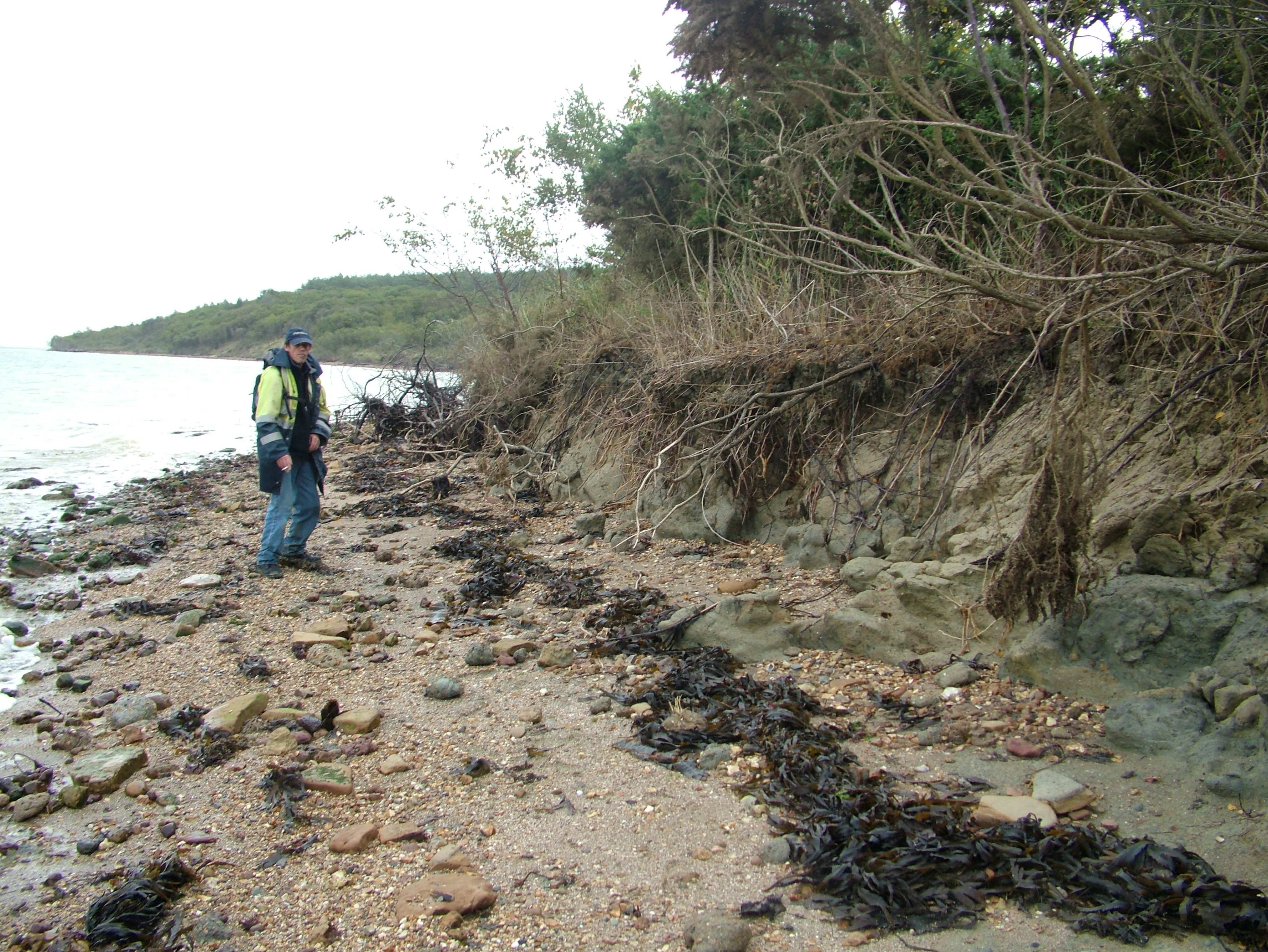 The early Oligocene beds at Hamstead are highly fossiliferous in mammal, crocodile, turtle, crustaceans and fish remains. Molluscs, plants and seeds can also be found simply lying on the foreshore.

♦ Access to the cliffs is limited due to a number of private roads, where parking is not permitted. Therefore it is vital you use the following directions as recommended by the locals. Do not attempt to gain access by parking in the private roads, as this can block access for large vehicles.
♦ Park at the view point east of Yarmouth (map ref: 367899). Then walk east along the road and turn left (map ref: 371898), down a gravel track and through a copse at the end to reach the beach (map ref: 374901).
♦ Ref: 50.72196°N, 1.44286°W

FIND FREQUENCY: ♦♦♦♦♦ – The beds at this location are highly fossiliferous and rich in many types of fossils. These are also of very good quality, with superb preservation. This is a fantastic location to visit and the best on the island.
CHILDREN: ♦ – Hamstead Bay is ideal for families, but access may be difficult down to the shore. It can also be a fair walk, so is not recommended for children.
ACCESS: ♦♦♦ – There are several roads that provide access to Hamstead Bay. However, these are private roads with no space to park, and access down to the cliff is dangerous. Therefore, follow the access route set out above.
TYPE: – All of the fossils are found on the foreshore. You just pick them up.

The coastline from Hamstead Bay to Yarmouth is rich in mammal, crocodile, turtle and fish remains, and seeds, plants, molluscs and crustaceans. Crocodile and turtle plates, and crocodile teeth are the most common fossils. The Hamstead Formation is full of fossil seeds, especially Stratiotes websterii, which can be found here, mostly by sieving, since they are very small. There are two species of crocodile, with the most common being Diplocynodon. And there are two species of turtle (Trionyx and Emys). At the base of the Bembridge Marls, the bivalve, Ostrea, can be found compacted within a thin layer. The black and grey-to-green marls contain many different species of bivalve, including Corbicula, Polymesoda and Mytilopsis, and gastropods, including Potamides and Melanoides.

From the Hamstead Member, freshwater molluscs, such as Viviparus (a gastropod) and Unio (a bivalve) are the most common. However, there are so many that it would be impossible to list them all.

The main place to look at Hamstead Bay is along the foreshore. Tiny teeth and small remains, including crocodile, turtle and fish, can be found by getting on your hands and knees, and searching within the shingle on the foreshore, especially at the base of the cliff and along the tideline. Fossils can be found at both access points either along Bouldnor Cliff or Hamstead cliffs and, often, if you stay in one area, you can pick up lots of teeth and fragments of bone without moving too far. For larger mammalian remains, and turtle and croc fragments, walk along the foreshore from Hamstead Bay to Bouldnor Cliff. You are more likely to find the larger fragments in the middle of the section between Yarmouth and Hamstead Bay.

You can also sieve or take samples back for home sieving of the Hamstead Formation. This bed is full of fossil seeds, and many different species of mollusc and small teeth. At the Hamstead cliffs, the Bembridge Marls are exposed at the base. Within these, fish remains and occasional other vertebrates can be found in a sandy layer of silt. The marls are full of seeds and molluscs.

The foreshore and cliff along this coastline provide the only opportunity (along with the neighbouring Yarmouth location) to examine the complete Bouldnor Formation on the Island. These deposits are Oligocene from the Priabonian stage.

The Cranmore Member of the Bouldnor Formation is accessible at the top of the cliff, with the bulk of the cliffs between Hamstead and Yarmouth comprising of the Hamstead Member.

All of the fossils can be picked up off the foreshore, without the need of any tools. However, it is best to take a few, which may come in useful.

Common sense when collecting at all locations should be used and knowledge of tide times is essential. The tidal conditions at this location are dangerous and sometimes double tides affect this coast. You must return before the tide turns and must check out tide times before you visit. It is very easy to get cut off.