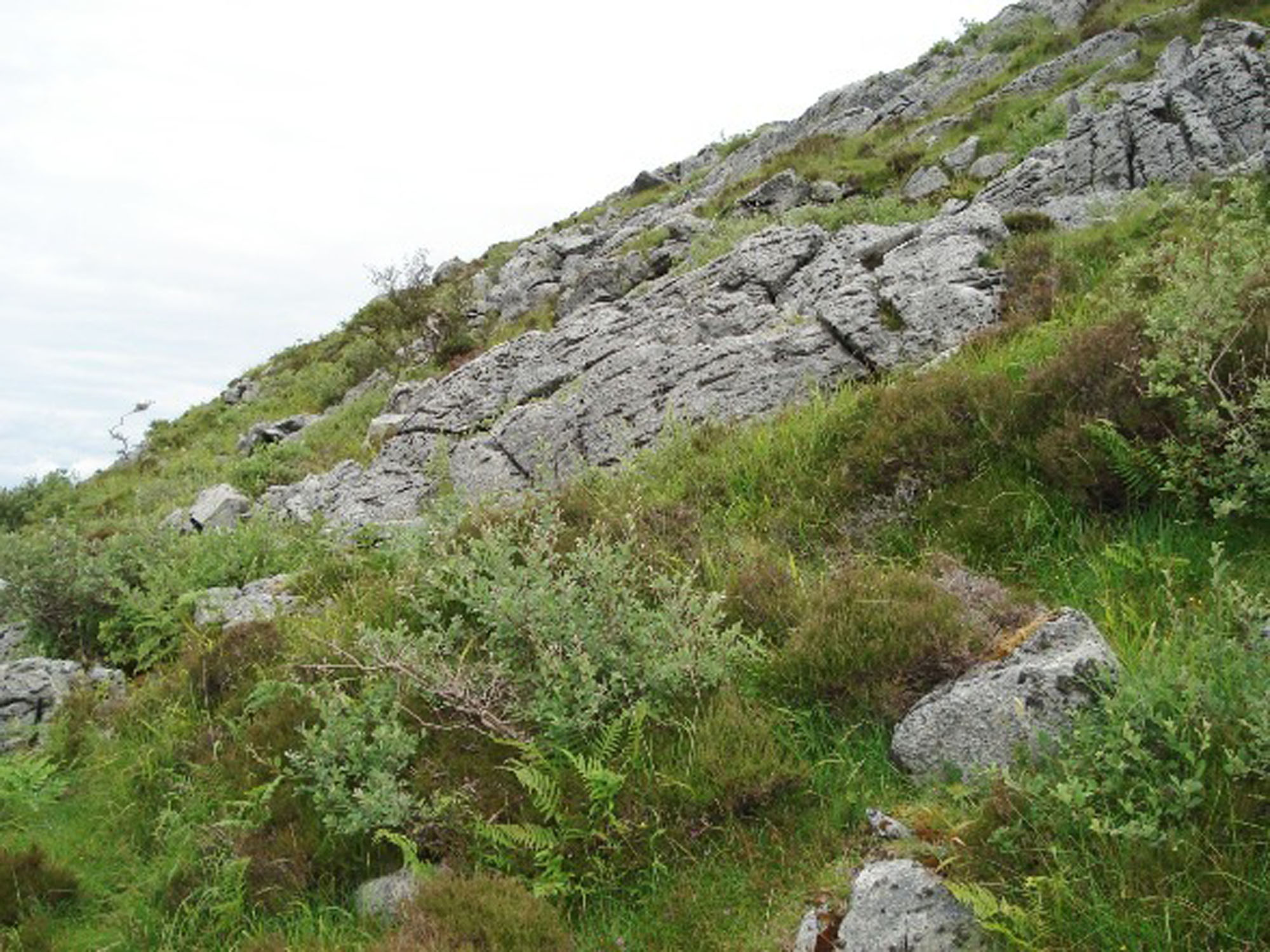 Infrequent Cambrian fossils can be observed on the surfaces of dolomitic limestone boulders at the base of Ben Suardal. They are not particularly easy to find and are hard to collect, but their great age should be an incentive to at least try to find them.

♦ Parking can be found in a lay-by below the limestone outcrop. To make sure you are in the right place, look at the mountains opposite the outcrop and if you are roughly in line with the valley in between them, you have found the spot.
♦ From the lay-by, climb up to the exposed rock. Fossils can be found weathering out of the surfaces of the boulders.
♦ Cars can be parked at the base of the hill and it is a short walk up to the limestone outcrop.
♦ Ref: 57.21526°N, 5.92594°W

FIND FREQUENCY: ♦♦ – It takes a while to find a fossil here. The surfaces of limestone boulders must be searched carefully. However, if you are patient enough, sooner or later you will find something.
CHILDREN: ♦♦ – There is quite a lot of climbing over limestone boulders involved in looking for fossils at this location. Older children may be able to handle this, but younger children should not attempt it.
ACCESS: ♦♦ – Cars can be parked at the base of the hill and it is a short walk up to the limestone outcrop. However, to find fossils, the limestone boulders must be scaled, so this location is only suited to older children and fitter fossil hunters.
TYPE: – A fossiliferous dolomitic limestone outcrop is exposed at the base of the hill. As this slowly weathers, cherty fossils are exposed.

Look on the surfaces of the limestone boulders. These have many cherty masses weathering out of them. The fossils are preserved in this material and are raised slightly above the surrounding limestone. The south-western side of the outcrop seems to have the most fossils.

The most common and easily recognizable fossils to be found are gastropods. Other molluscs and sponges are also present, but are rarely encountered. When found, gastropods are usually incomplete and are seen as coils, slightly raised from the rock surface. 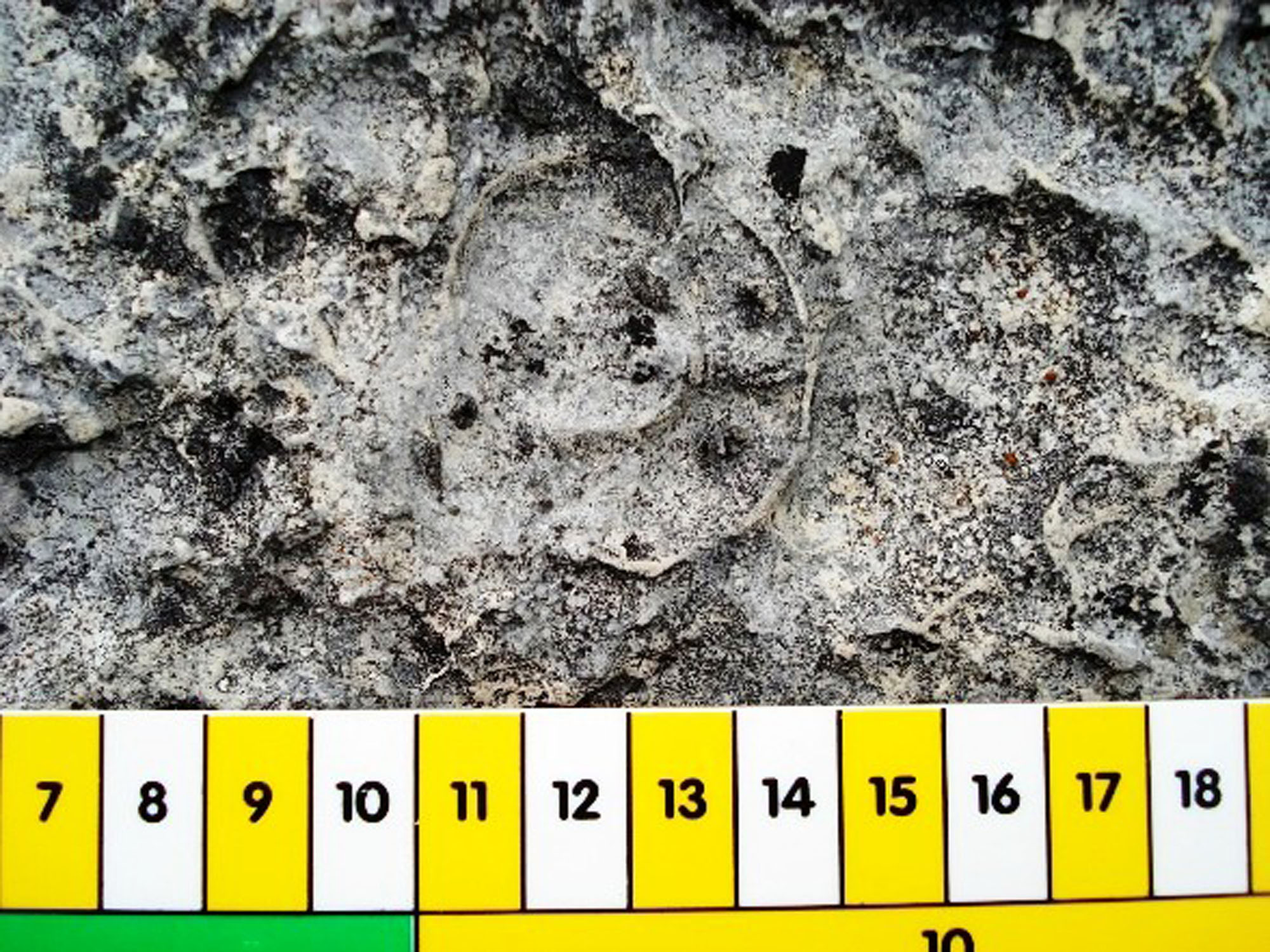 The rocks at Ben Suardal consist of the Durness Group (previously Durness Limestone) and are late Cambrian/ early Ordovician in age, being about 480 million years old. The Dunrness Group forms a narrow, discontinuous belt, extending along the North-western side of Scotland from the Durness-Eriboll area, through Assynt and Kishorn, to Skye.

This rock has been slowly dissolved by rain water over thousands of years, which has created caves in the area.

The obvious dangers of climbing over rocks are present at this location. Mobile phone signals may be lost here, so make sure you tell someone where you are going and what time you expect to return.

A big hammer is needed here, as the rocks are large and very hard. Some smaller rocks can be found, but a lump hammer is the very least that is required. A sledge hammer is ideal. Mobile phone signals may also be lost here, so make sure you tell someone where you are going and what time you expect to return.