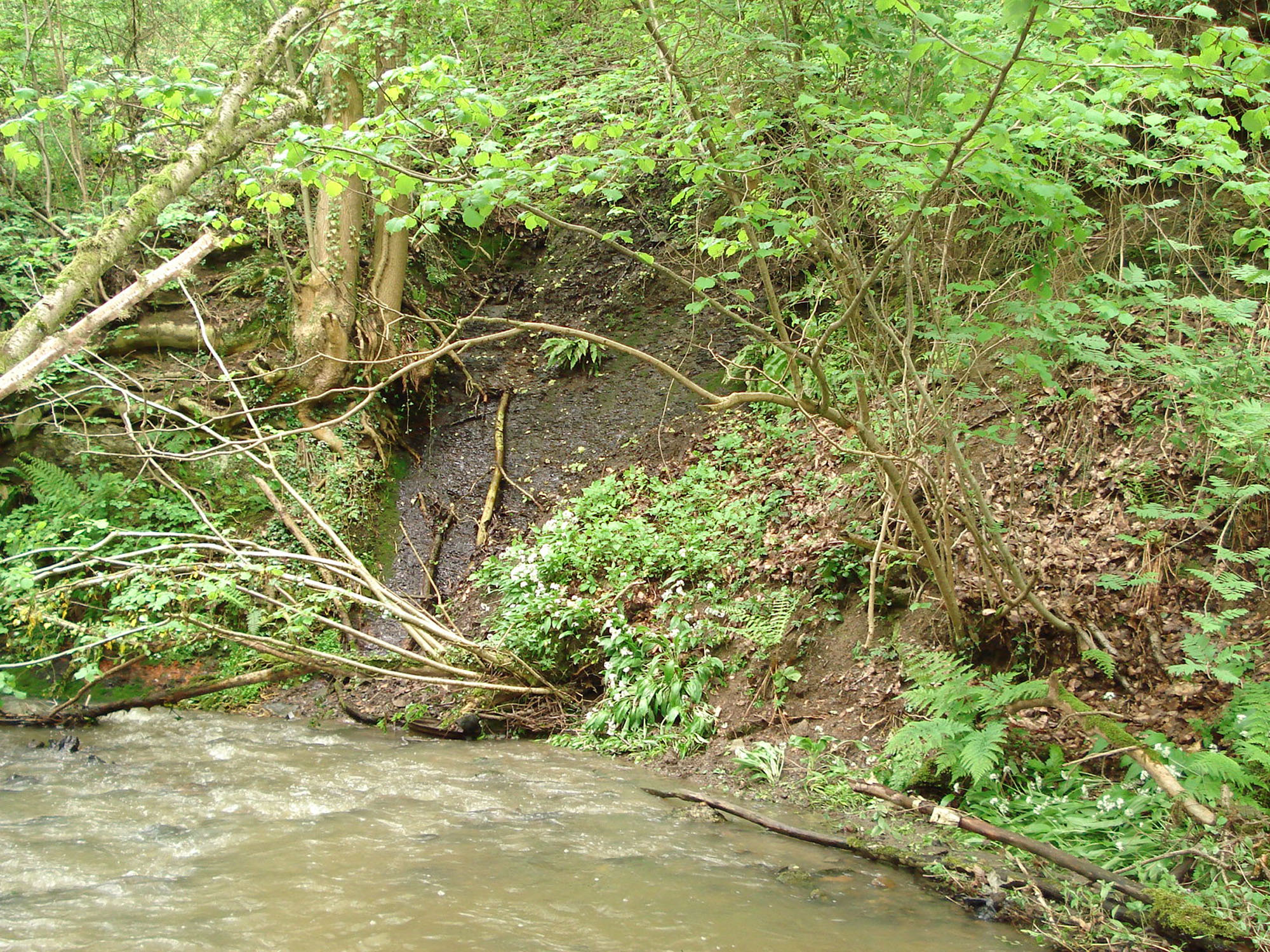 Fossils can be found in shales, which outcrop in the stream banks of the Hope Valley stream near the nature reserve. Finds are few and far between, but occasionally a nice, whole trilobite can be collected.

♦ The Hope Valley Nature Reserve is located on the A488, approximately 16km southwest of Shrewsbury.
♦  Park in the nature reserve’s car park and consult the information board. Then walk back to the road and turn right at the car park entrance. Walk about 20 or 30m, until you come to a smaller road, turning left away from the main road at a shallow angle. The stream here runs under the road. Walk upstream for a few meters and you will be in the fossil hunting area.
♦  Fossils can also be found in shale outcrops in the stream bank directly in front of the entrance to the nature reserve. The water here is a bit deeper than further upstream, so be careful.
♦ Ref: 52.61035°N, 2.96197°W

FIND FREQUENCY: ♦ -At Hope, most of the outcrops of shale are too weathered to yield recognisable fossils and fallen blocks are quickly broken up by the action of the water in the stream. If the occasional, complete shale block is found on the stream bank, a trilobite fossil may sometimes be revealed on splitting the rock. There are a few outcrops of in situ and less weathered shale, but these are small and sensitive to over collecting.
CHILDREN: ♦♦♦ – Although Hope is a stream location, there are many places where the water is shallow and the streambed relatively flat. To reach the shale outcrops, a walk of less than 50m from the car park is required. To collect, the stream must be entered, so suitable footwear and clothing are necessary.
ACCESS: ♦♦♦♦ – There is a public car park at the Hope Valley Nature Reserve, which will accommodate numerous cars. The collecting area is a very short walk from the car park.
TYPE: – Fossils at Hope are found in blocks of shale that have fallen from the stream banks. However, there are not many of these and the few outcrops of fairly solid shale could quickly become depleted, if collecting is carried out in a selfish manner.

Occasional trilobite fragments, as well as whole specimens, can be found with patience. Unfortunately, the lack of fossiliferous rock to split means that few specimens will be collected. Graptolites are also present, but are poorly preserved. These appear as black lines, with partials as black specks in the shale. Often these show up better if you wet the surface of the split shale. Look for blocks of shale that have fallen from the outcrops in the stream bank. If there are none, blocks can be extracted from the in situ rock, but do not over collect.

The blocks of shale can be split easily with a geological or bricklayer’s hammer. If you are lucky, you will find small trilobite fossils. There are plenty of partial graptolites in the shale too, but these are poorly preserved.

The geology is mostly Ordovician (Llanvirn, Darriwilian stage), of 458 to 464 Mya with  outcrops of the Hope Shale Formation and Silurian rocks, mostly sandstones of the Telychian stage.

Recent woodland clearance work by the Shropshire Wildlife Trust has apparently destroyed what remained of this outcrop.  The quarry still remains here and shows massive sandstones and shales of the Llandovery series (Telychian stage).  These show cross bedding and bioturbation; with some loose material containing fossils.

The stream bed on the opposite side of the road shows steeply dipping Ordovician Hope Shales.  The stream is accessible in places but without wellies, it cannot be walked to see if it reveals a contact with the Silurian at any point.

South of the quarry there is a spur, which descends to the road.  At its base a very small exposure might be Hope Shales.

Included in this site is the quarry by the bus stop in Hope village. This shows good folding of the Silurian rocks. Smaller exposures of folded Silurian rocks can be seen on the RHS of the road when travelling south.

Within the Hope Valley, it is hard to get a mobile phone signal, so it is especially important that someone knows where you are and what time you expect to be back. In a few places, the stream flows quickly and, in others, it can be quite deep, especially after rainfall. Only enter areas that you are confident do not pose a threat.

Most fossils at Hope can be picked up from the loose shale, but a geological or bricklayer’s hammer, together with eye protection are useful to split blocks of shale.

This site is an SSSI. This means you can visit the site, but hammering the bedrock is not permitted. For full information about the reasons for the status of the site and restrictions please download the PDF from Natural England – SSSI Information – Hope