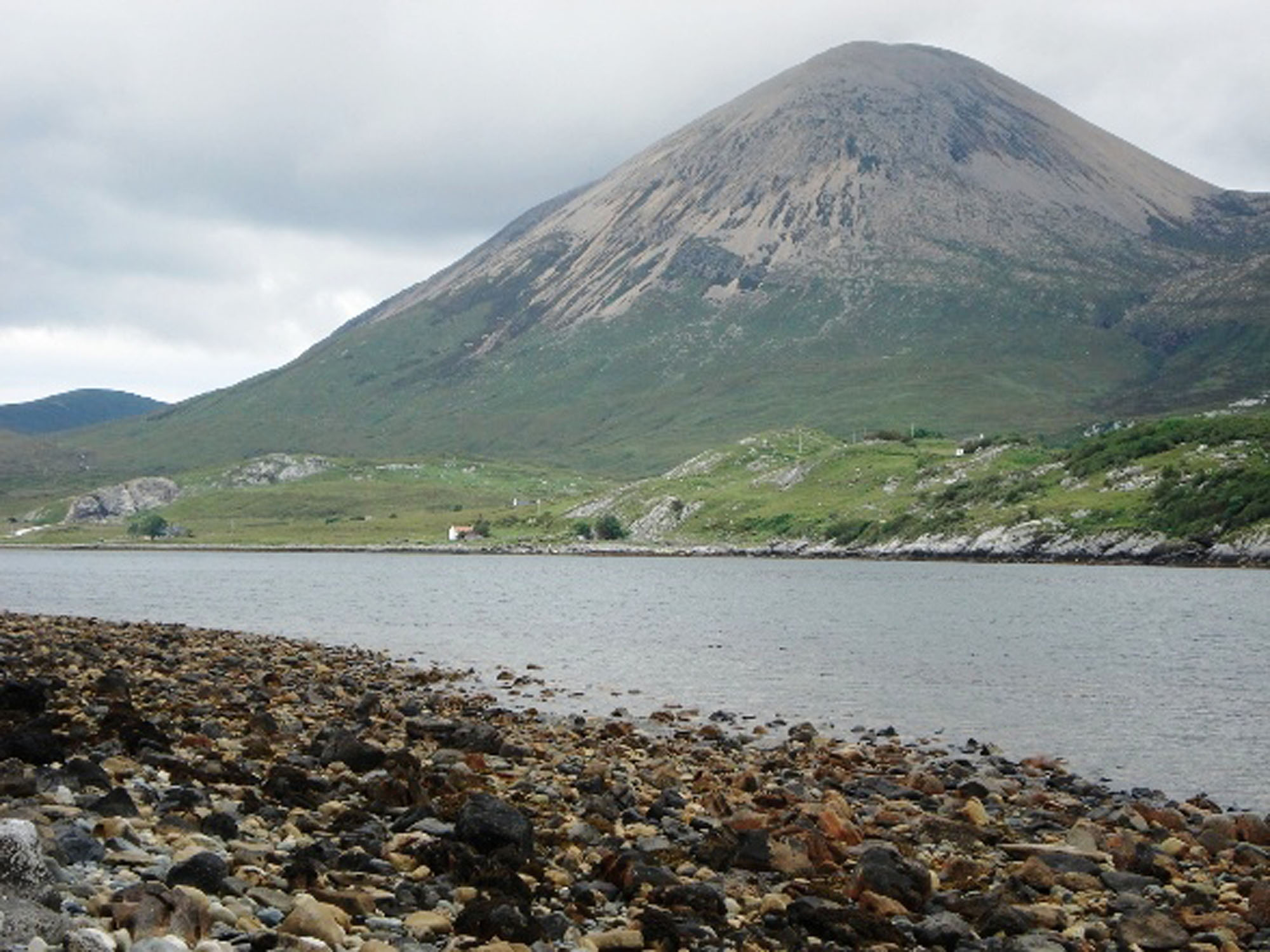 This is a location that is worth stopping off at for an hour on the way to Elgol. Belemnites can be found here and a few rocks contain bivalves. Some sandstone outcrops also contain fossils.

♦ From Torrin, follow the B8083 road around the top of the loch and along the other side until you see some boats and a couple of houses on your left-hand side.
♦ Carry on a little while longer until you reach a lay-by from which you can see a red sign raised above the beach. Park here.
♦ There are various routes down to the beach, some easier than others, but you will probably just have to make your way through a bit of undergrowth to access it.
♦ Once on the beach, walk to your left or right to find fossils.
♦ Ref: 57.20860°N, 6.03253°W

FIND FREQUENCY: ♦♦ – Belemnites are found in sandstone outcrops, as well as in smaller sandstone pebbles and cobbles. Fossils are not abundant, but some should be found nonetheless.
CHILDREN: ♦♦♦♦ – Cars can be parked next to the beach here and, when on the beach, there are no large boulders or perilous obstacles to overcome.
ACCESS: ♦♦♦♦ – Although cars are parked in a lay-by only a few metres from the beach, it is a bit of a scramble through vegetation to get down to it. However, once on the beach, you can walk north or south unimpeded.
TYPE: – Fossils can be found in the cobbles and pebbles that make up the beach, and also within sandstone outcrops.

The most spectacular bivalve-packed rocks are seen at the base of the cliff towards the north of the bay. To find smaller blocks containing these fossils, search through the cobbles and pebbles in front of this area. Trace fossils on bedding planes can also sometimes be seen around here.

Within sandstone cobbles and pebbles, occasional pieces of belemnite can be found. A few rocks contain bivalves and some sandstone outcrops also have fossils. There are plenty of volcanic rocks on this beach, as well as the fossiliferous sandstone. Unfortunately, at first glance, some of them can look as if they contain fossils and it can take a while to get your eye in to avoid these.

The rocks at Faoilean are from the Bajocian and Aalenian stages of the Jurassic and are 168- 183 myrs old.

The Bearreraig Sandstone Formation covers both stages; with the Aalenian stage sub-divided into the Druim an Fhuarain Sandstone Member, from which most of the fossils at Faoilean are found.

The Scalpay Sandstone Formation crops out at the slipway and the rocks here are 176 – 190 mys old.

This is a fairly safe location. There is no chance of being cut off by a rising tide and there are no serious obstacles to overcome. However, mobile phone signals may be lost, so make sure you tell someone where you have gone and what time you expect to return.

A big hammer is needed here, as the rocks are large and very hard. Some smaller rocks can be found, but a lump hammer is the very least that is required. A sledge hammer is ideal.