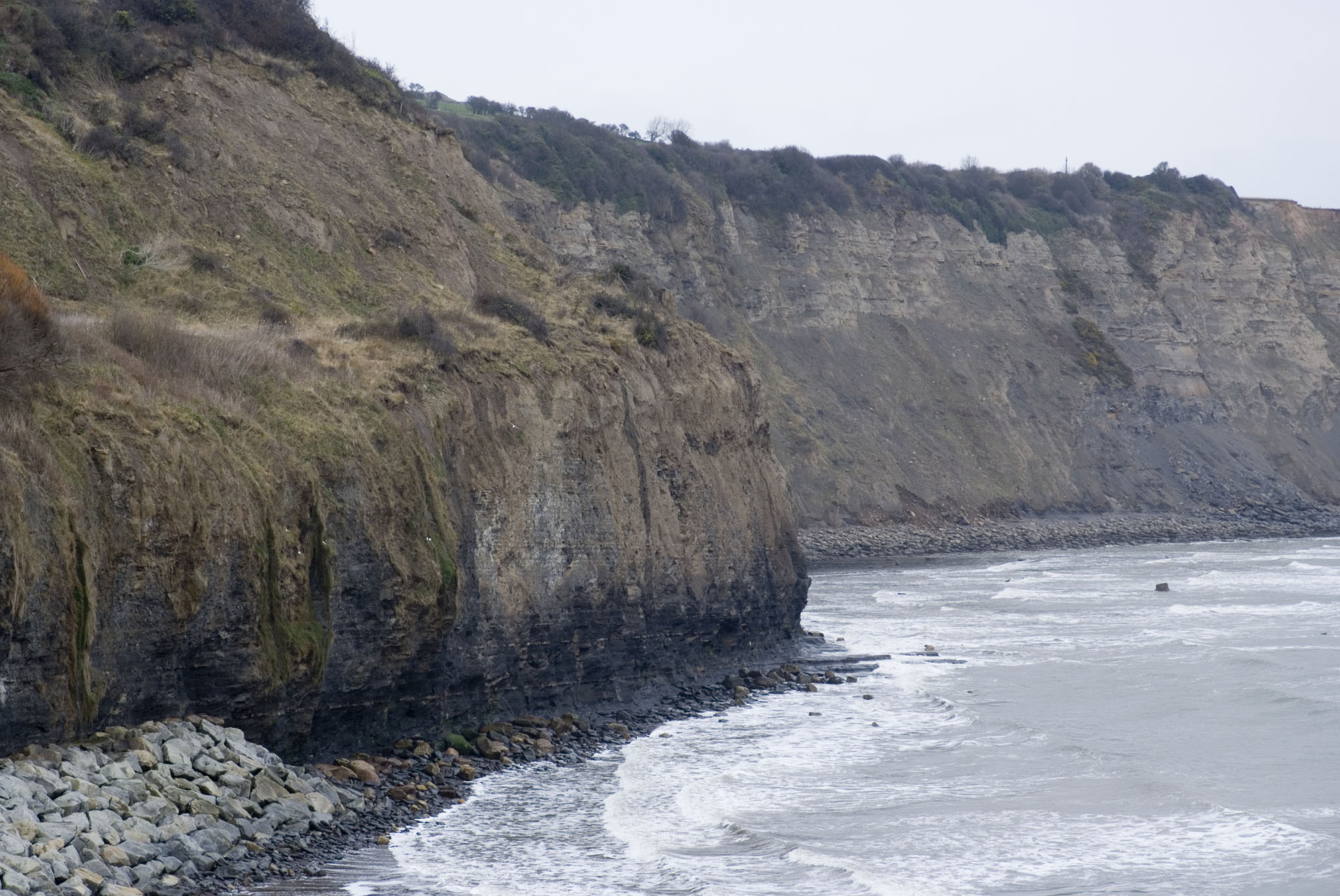 This is one of the first places many people come to along the Yorkshire Coast, but most come back with nothing, unless they know where and what to look for. The middle of the bay consists of boulder clay, but either side can be quite productive.

♦ At Robin Hood’s Bay village, you can park in either the small car park at the top of the hill or the second larger one just a short walk away.
♦ From here, the best end to visit is the north side. You will find a footpath at the top of the hill, to the left of the main street leading to the beach. This winds round and passes a picnic area.
♦ You can also visit the south and middle part of the bay. To do this, go down into the main street at the bottom of the hill and follow round to the right. You will see some steps, which follow the sea defence and lead to the shore.
♦ Ref: 54.43442°N, 0.53079°W

FIND FREQUENCY: ♦♦♦ – Robin Hood’s Bay yields excellent ammonites, but you need to work for these. The best area to collect from is the north side.
CHILDREN: ♦♦ – Due to the dangerous access to this location, young children should not visit this site.
ACCESS: ♦♦♦ – You should park at the top of the cliff and there is a footpath down to the beach.
TYPE: – Most fossils can be found on the foreshore, within nodules or loose. Fossils are also commonly seen in the cliff, on the scree slopes, and in the rocks and boulders.

Most fossils are found either from the foreshore exposures during scouring conditions or in rocks, boulders and nodules. They can also be found after cliff falls.

Search the rocks on the foreshore. Ammonites can often be found this way, but you will need the right tools. It is unlikely you will find fossils simply loose on the foreshore, as you normally have to work for finds at this location. Robin Hood’s Bay yields little during the summer months and it is often only after winter storms that finds are made. The north side of the bay can be rich in ammonite remains and these can mostly be found after cliff falls. Ammonites (Platypleuroceras, Tropidoceras, Acanthopleuroceras and Androgynoceras) can be found, along with the large bivalve, Pinna. Within the calcareous shales, exposed in the low tide reefs at the centre of the bay, you can find the ammonites, Arnioceras and Caenisites.

Around Robin Hood’s Bay, well-developed platforms cut across outcrops of Liassic shales. The cliffs mainly comprise till resting on the Lias and are subject locally to considerable mass-movement and rapid cliff-retreat.

The cliffs are about 50 m in height in the northern part of the bay where they are cut by two steep-sided valleys, Mill Beck and Stoupe Beck. Here the Lower Lias forms

The Peak fault runs through South Cheek, with the result that the southern part of the cliff is dominated by Toarcian rather than Pliensbachian shales.

The cliffs are cut both into the Lower Lias bedrock and glacial materials and provide an excellent example of a cliffed coastline where the comparatively recent weaker sediments reveal older features as they are eroded.

Common sense when collecting at all locations should be used and knowledge of tide times is essential. This part of the coastline is very dangerous as a result of tidal conditions, so make sure you return before the tide turns. Keep away from the base of the cliffs, as rock falls are very common. Hard hats are recommended.

A good eye is essential and often all you will need but a hammer and splitting chisel are recommended at this location. A lump hammer will also come in handy if you plan to break large rocks and try your luck. Suitable footwear should also be worn. Any fossils should be wrapped well and placed carefully into containers.