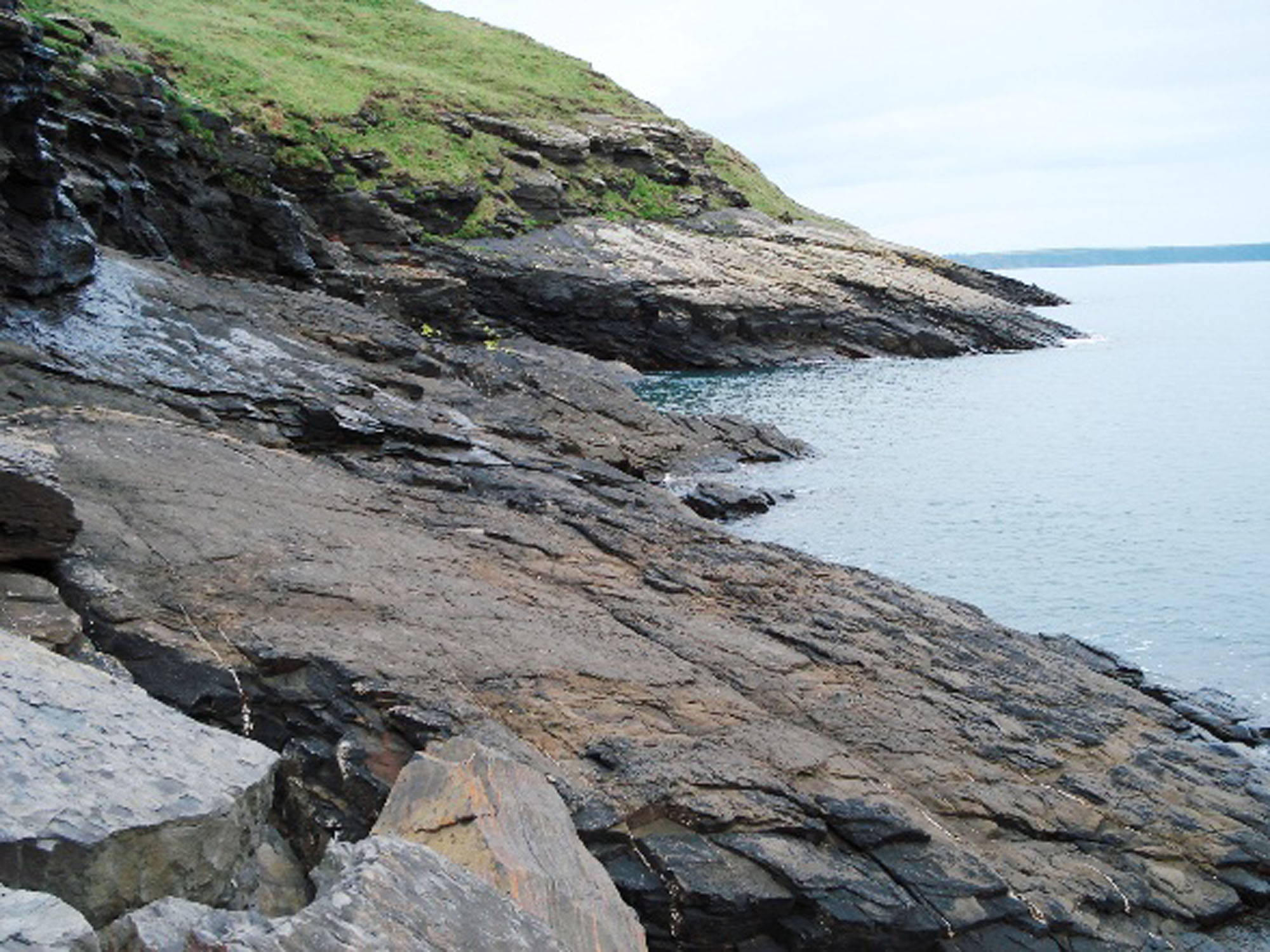 ♦ Free parking can be found next to the Mariners Inn, opposite the bay. There is also a bus stop here.
♦ The cliffs and loose rocks at the side of the bay can be investigated to find wood impressions in sandstone, and also small pieces of coal.
♦ To view the best plant fossils, take the clifftop path that leads to the north. Along the way, you will see some beautiful coastal features that help to make the Pembrokeshire coastline so special.
♦ Follow the path until you see a rock formation that can only be described as looking like the head of cartoon dog ‘Snoopy’ (aka Rickets Head). Below this, there are large sandstone and shale boulders on the surface of which plant fossils can be seen (51.827661, -5.115743).

FIND FREQUENCY: ♦♦♦ – This location is a site of special scientific interest (SSSI), which means that fossils must not be collected from the large boulders and the cliffs. However, there are many large and interesting plant fossils to be seen, which should make up for this.
CHILDREN: ♦♦♦♦♦ – Fossils can be seen in the rocks in the bay at Nolton Haven without much difficulty. However, the area to the north is harder to access. The path along the clifftop to the main fossil hunting area is not fenced and there is a long drop down to the rocks below.
ACCESS: ♦♦♦ – There is a free public car park next to the Mariners Inn at Nolton Haven. The bay is situated just across the road from here and is easy to access. The walk to the main fossil hunting site takes you up and down clifftop paths and it can be a bit of a scramble to investigate the rocks at the location the path leads to.
TYPE: – This location consists of cliffs and foreshore exposures.

In the rocks of the bay, nondescript fossil wood can be seen and small pieces of coal may also be found. In the main, the fossil hunting area is reached by the clifftop path, where you will see better quality, more recognisable plant fossils. The most common of these is Stigmaria ficoides. Look on the surface of the large boulders below the ‘Snoopy’s’ head rock. You should be able to find numerous large S. ficoides fossils here.

Also found in the rocks here are many fragments of smaller plants, packed into the shale. However, these are poorly preserved. Within the cliff, there is also a coal seam that is worth a look.

There are a few dangers at this site, with the unguarded clifftop path being the most serious. Children should be fully supervised if they are taken along this route. Knowledge of tide times is essesntial, because other dangers include being cut off by the tide in one or two places. Slipping on sloping rocks is also possible. It may be hard to get a mobile signal at Nolton Haven, so be especially sure here to inform someone of where you are going and what time you expect to be back.