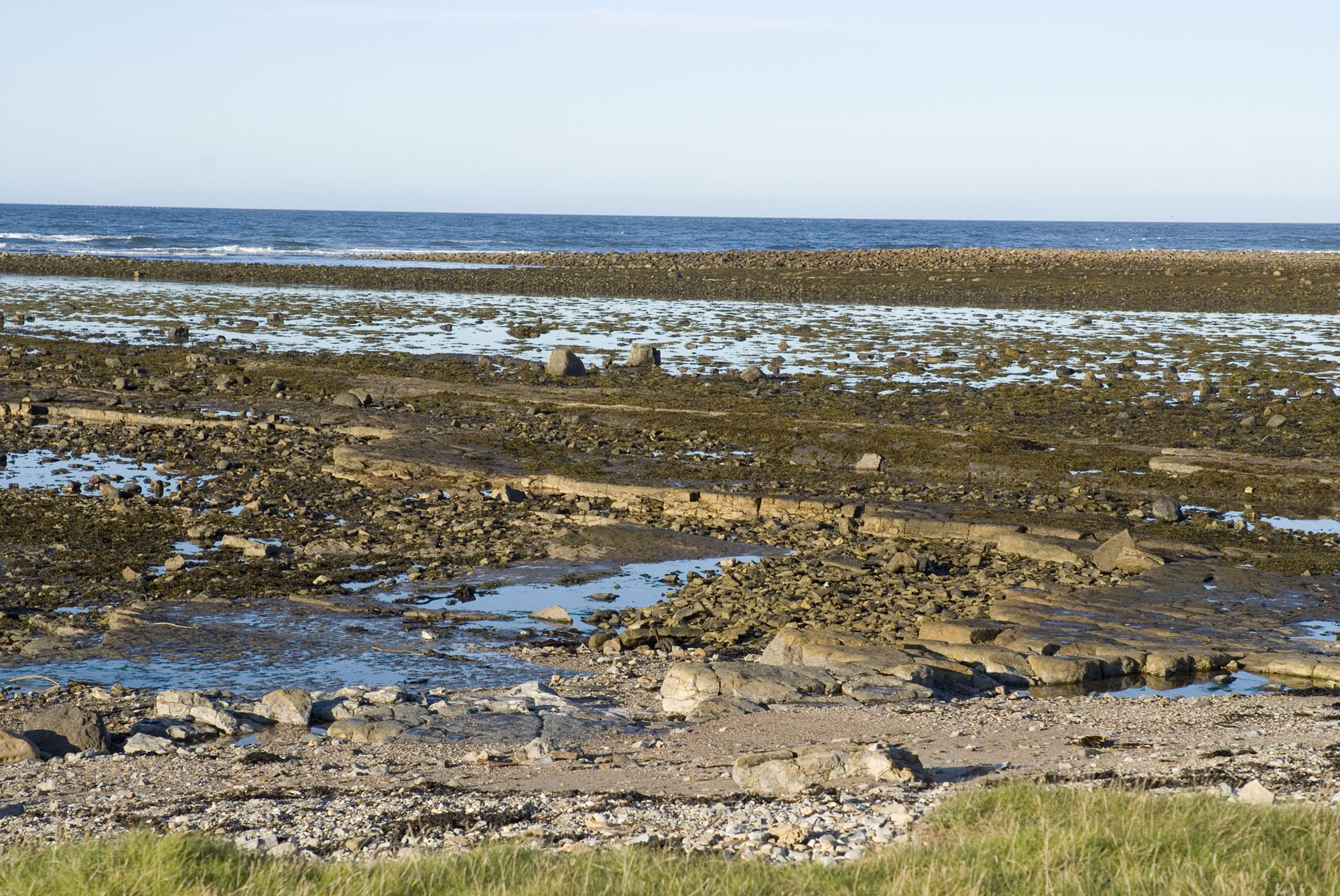 Spectacular bedding packed with corals can be seen at Barns Ness. This is a fantastic location for corals and there is plenty to be found here, although the fossils are not as well preserved as those from Aberlady.

♦ Follow the A1 past the duel carriageway until you come to Skateraw. Here, a small B-road takes you to East Barns. Follow the road through the village and head to the campsite.
♦ Past the campsite, you will find parking close to the shore, not far from the lighthouse. From here, you need to walk westwards.

Just to the west of the lighthouse, examples of the trace fossil Rhizocorallium can be found. These are horizontal traces up to 50cm long. In addition, Zoophycos cauda-galli can be found here. These are the grazing traces of an unknown invertebrate. Other trace fossils that you can find include the ‘U’-shaped vertical tubes of Diplocraterion. Note that the rocks are unfossiliferous to the east of the lighthouse.

It is not until you get to Catcraig/Whitesands that you come across the best corals. Here, a bed 25cm thick about one metre below the top of the limestone is full of the coral Koninckophyllum, and a whole bedding plain containing the coral Lithostrotion junceum can be see exposed on the foreshore. On the foreshore, all of the corals are found within rocks. Note that you can search and collect from the loose material, but must not hammer the bed rock.

Most of the best corals can be found at Whitesands and, just around the corner, there are some complete bedding plains of corals, which stretch for many metres along the beach and are several metres thick. Some very good corals can also be found at the small bay near where you park and just before the lighthouse on the foreshore.

At Barnes Ness, there are some of the most extensive limestone outcrops in central Scotland. There are from the Lower Limestone Formation, comprising limestone, argillaceous rocks and subordinate sandstones, formed 322 to 331 Mya during the Carboniferous

Heading west around Barns Ness headland, rocks of the Hurlet Limestone appear, formed 326 to 331 Mya, before a return to the Lower Limestone Formation within White Sands Bay. The Hurlet Limestone is a pale to dark grey, crinoidal, and shelly bioclastic limestone, interpreted to be of marine origin.

Most of the fossils can be found by searching the loose material on the foreshore. However, hammering is not permitted at this location.