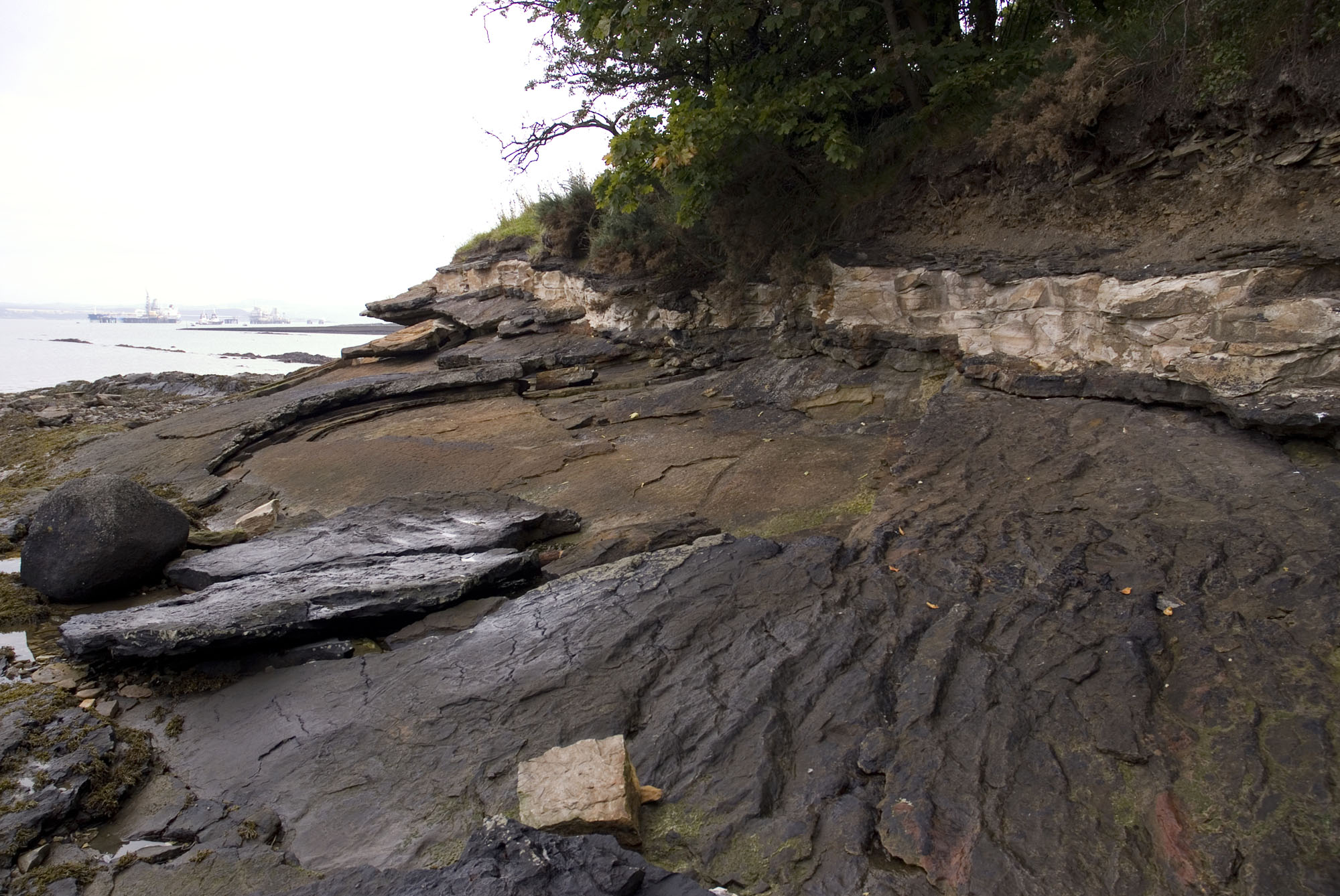 Below the Forth Road and Forth Rail Bridge, Carboniferous fish fragments and plant remains can be found in the shale. It can take some time to find the fossiliferous zones, but once you do, there is plenty to be collected.

♦ The roads around Queensferry can be extremely confusing if you do not know the area, We recommend that you take the B924 off the A90 from at the Edinburgh bypass. Follow this road under the bridge.
♦ Park just under the road bridge, along the seafront, and then take the footpath under the rail bridge. If you walk along the foreshore before the bridge, you will come across some rocks that can be a challenge to get past. The path will take you to the shore just beyond these rocks.
♦ Ref: 55.99213°N, 3.37868°W

FIND FREQUENCY: ♦♦♦ – This site can be very productive for fossils, but you will need to find a good zone. Keep splitting rocks until you find fish or plant remains and then, once you have found the layer, you should find a lot more fossils.
CHILDREN: ♦♦♦ – This location is suitable for families, but not young children due to the rocky foreshore.
ACCESS: ♦♦♦♦ – Queensferry has good parking and the walk is not too far. There are also toilets nearby.
TYPE: – Fossils at Queensferry can be found on the foreshore.

The most common finds at Queensferry are fish fragments and scales. Fish coprolites are also very common. Fossil plants, in particular cones, are not uncommon and can be found in the same zones as the fish fragments. Brachiopods can also be found along the foreshore. Once you reach the foreshore from the footpath, fish fragments can be found in the shale exposed there. Split these layers until you find a fossiliferous bed. In addition, fossils, such as brachiopods and bivalves, can also be collected from loose material on the foreshore. The best area for collecting is near to the cliff, where the shale is faulted and rises sharply. At the base of this is a richly fossiliferous bed.

The fossils from South Queensferry come from the base of the Burdiehouse Limestone resting on strata of the Calders Member. This distinctive limestone is a lacustrine deposit, commonly 6-9m thick, containing abundant fossilised ostracod, plant and fish remains. The large rocks just under the Forth Bridge are Calders Member, from the West Lothian Oil-Shale Formation of the Strathclyde Group. They are Asbian aged.

Also present is the Hopetoun Member, an Asbian-aged sedimentary bedrock formed approximately 326 to 335 Mya in the Carboniferous, also belonging to the Strathclyde Group.

Common sense when collecting at all locations should always be used and prior knowledge of tide times is essential. You can easily get cut off by the tide here. In addition, access to the shore is difficult, because you have to climb over some very large rocks.

Most of the fossils can be found by splitting shale, but fossils are restricted to pockets and are not widespread.