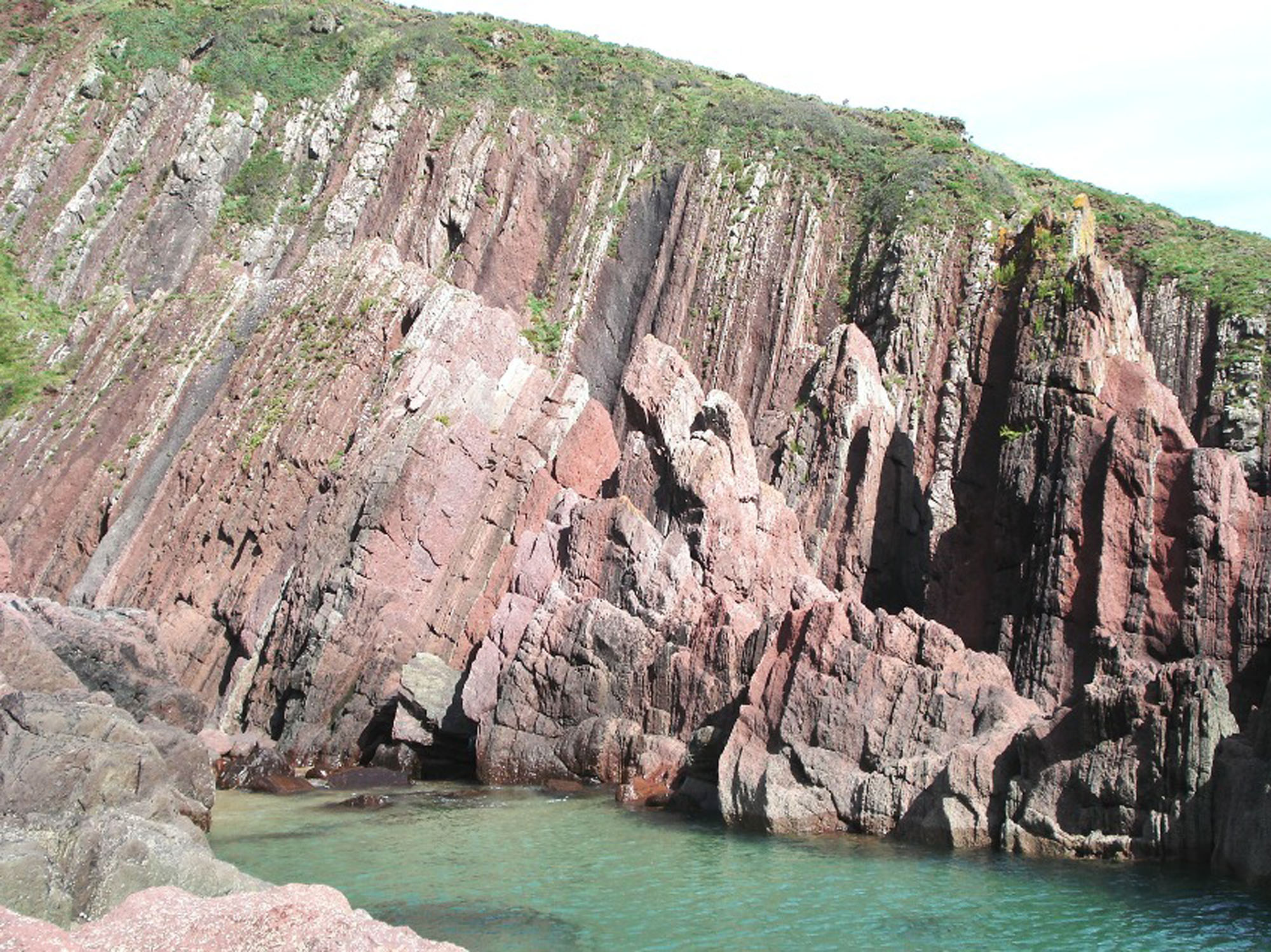 The strata exposed at Presipe are a delight to behold and the various coves are very beautiful, if nearly impossible to reach except at low tide. Trace fossils are also present in certain layers.

♦ Parking can be found along a small road next to the campsite at Manorbier. From here, take the path to the west that skirts the perimeter fence of the campsite.
♦ At the end of the fence, the path veers to the left across a field and then across more fields from which you can see the sea.
♦ Follow the path until you reach the point where it descends down to a beach. This is Presipe.
♦ Ref: 51.63807°N, 4.78906°W

FIND FREQUENCY: ♦♦♦ – Fossils are fairly abundant at Presipe. One particular stratum has trace fossils preserved on its bedding planes, but the layer is hard to access and the fossils are easy to miss. More likely to be seen are large, round, in-filled fossil burrows, which occur in various places at this location.
CHILDREN: ♦♦♦♦ – There is a bit of a walk to reach the site, but the sandy beach is very pleasant and ideal for children. And the geology here will definitely impress all who visit. However, children should not be allowed to collect at one of the location discussed below (see below for further information).
ACCESS: ♦♦♦ – Presipe is easy to find by following the Pembrokeshire Coastal Path from the campsite. There is quite a descent to the beach, but down a good set of steps. However, unless accessed at low tide, visitors are restricted to the western cove. Searching for the more obscure trace fossils is only recommended for the fit.
TYPE: – Strongly sloping, near perpendicular rock strata jut out from the beach to form various bays and coves. In some places, the bedding planes are exposed and it is on these that trace fossils are found.

Trace fossils can be found on the surfaces of bedding planes within certain rock strata.

The most obvious of these are large, tennis ball sized, red coloured circles. These are interpreted as in-filled burrows of a millipede-like animal. Also present are large dehydration cracks and current bedding, showing that the strata containing the trace fossils were laid down on land. Look on the surfaces of exposed strata for the red circles. These are fairly abundant and are easy to see.

One specific area reached by a scramble over fallen rocks allows the search for other types of trace fossils. To reach this area, the first outcrop of rock to the east of the main bay must be rounded at low tide or climbed over at other times. This is also necessary for the next outcrop. After this second obstruction, you must climb upwards over fallen rocks to reach the fossiliferous strata of the third outcrop. Once at the top, investigate those rock layers exposed to your left. Climbing here is not recommended for anyone other than the fit and sure-footed. Children should not attempt to fossil hunt at this location.

Trace fossils may be hard to see depending on light conditions, but are found on the bedding planes of a fine grained rock layer. Also found in this area are strata with large desiccation cracks on their surfaces.

Do not damage the cliffs or any large in situ rock outcrops and do not try to collect from the rock faces. There is scree below in which a few trace fossils may be found.

The rocks of the Milford Haven Group are present here and are argillaceous rocks and sandstone; interbedded and formed from rivers depositing mainly sand and gravel in channels, to form river terrace deposits, with fine silt and clay which formed floodplain alluvium during the Devonian epoch. The rocks are 423 to 407 million years old.
The Freshwater West Formation is assigned to the local Dittonian series and straddle the internationally recognised Lochkovian and Pragian Stages of the Lower Devonian

Young children should be supervised when descending the steps down to the beach and knowledge of tide times is essential. If venturing into the coves to the east of the main bay, keep a careful eye on the tide. It is easy to get cut off here. Mobile phone signals may be lost at this location, so ensure that you tell someone where you are going and what time you expect to return.