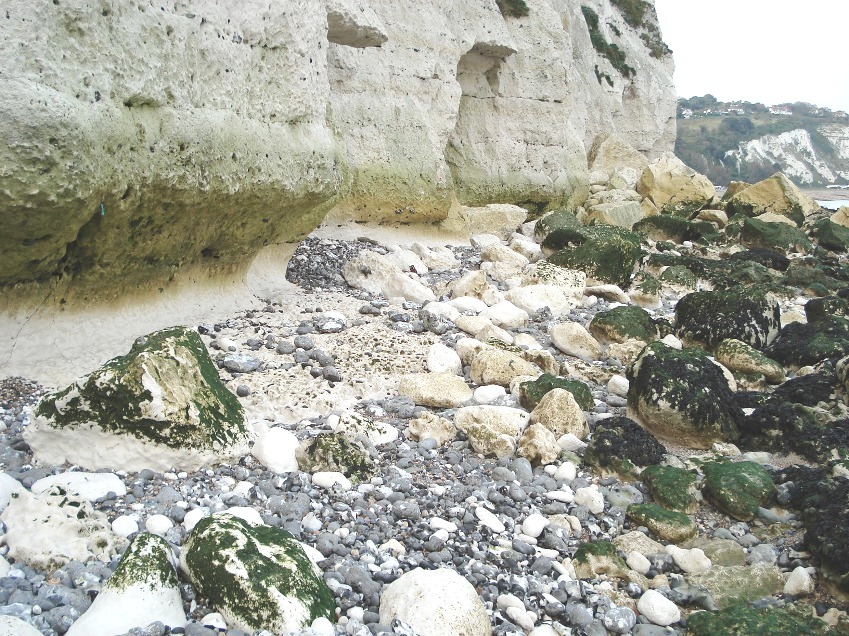 The picturesque bay at St. Margaret’s is eroded out of Conacian Upper Chalk. Fossils can be found in the cliffs, boulders and shingle both to the east and the west of the bay. The location is picturesque and there is a very nice pub to relax in after fossil hunting.

FIND FREQUENCY: ♦♦♦ – On a good day, plenty of fossils will be found. These are more abundant in the chalk of the southwest side of the bay, but the northeast side is worth a look for flint urchins and sponges.
CHILDREN: ♦♦♦♦ – The beach is easily accessible and fairly hazard free. There are some obstacles on either side of the bay, for example, boulders on the west and (sometimes) slippery steps on the east, but with supervision, this is a location that is suitable for children.
ACCESS: ♦♦♦♦ – Although the actual fossil hunting sites are easily accessible, the narrow road leading down to the bay is best suited to smaller vehicles. Camper vans and so on are not recommended.
TYPE: – Most fossils will be found eroding out of the wave-cut platform and chalk boulders at the base of the cliff. Also keep an eye out for flint urchins on the beach. Fossils are present in the cliffs, but should not be extracted for safety reasons.

On the northeast side of the bay, the most common fossils are flint sponges, among the shingle. The cliffs, and any boulders found below them, are poorly fossiliferous. Also look out for flint urchins. They are not massively abundant, but, with patience, one or two may be found. When looking for fossils within the shingle, look through pebbles of a similar size to the fossils you are looking for.

On the southwest side of the bay, common finds include sponges, brachiopods and sea urchins within the boulders and the wave-cut platform. It is also worth looking through the shingle for flint sea urchins and sponges.

The wave-cut platform of the actual bay is also fossiliferous, but often covered with seaweed. On the northeast side of the bay, you need to spend plenty of time searching through the shingle. There is no magic technique that you can use to find fossils here – you just need patience. One or two flint sea urchins and a collection of sponges from among the shingle within the space of an hour can be considered a reasonable haul.

On the southwest side, look on the surfaces of boulders and the wave-cut platform for fossils weathering out of the chalk – a hammer and chisel will be needed to extract these. Also look within the flints in between the boulders for flint moulds of sea urchins and sponges.

The cliffs also contain plenty of fossils, but extracting these can be dangerous and so is not recommended.

The Cretaceous cliffs at St. Margaret’s Bay are Cretaceous aged, from the Coniacian stage. The cliffs are comprised entirely of the White Chalk Subgroup, comprising the Lewes Nodular Chalk Formation, Seaford Chalk Formation and basal Margate Chalk Member, as part of that formation. The sections are famous for their fossils, primarily because of their excellent preservation in soft chalk.

The cliff line evident at Dover is broken at St Margaret’s Bay, which forms a natural divide; just to the south, the cliff direction changes at the South Foreland, and trends northwards to Kingsdown. Higher beds in the Lewes Nodular Chalk and Seaford Chalk formations, are progressively brought down to accessible levels in a northerly direction.

It is possible to be cut off by the tide at this location, so make sure that you consult a tide timetable before you visit and preferably start your hunt on a falling tide. Do not hammer into the cliffs or collect from areas below unstable portions of the cliffs.

Most fossils at St Margaret’s Bay can be found on the foreshore. Sometimes fossils in chalk blocks will require a hammer, safety googles and chisels to remove. A hard hat and shoes or boots with a good grip are also advisable here to protect against any small falling debris and the chances of slipping over on seaweed covered rocks.