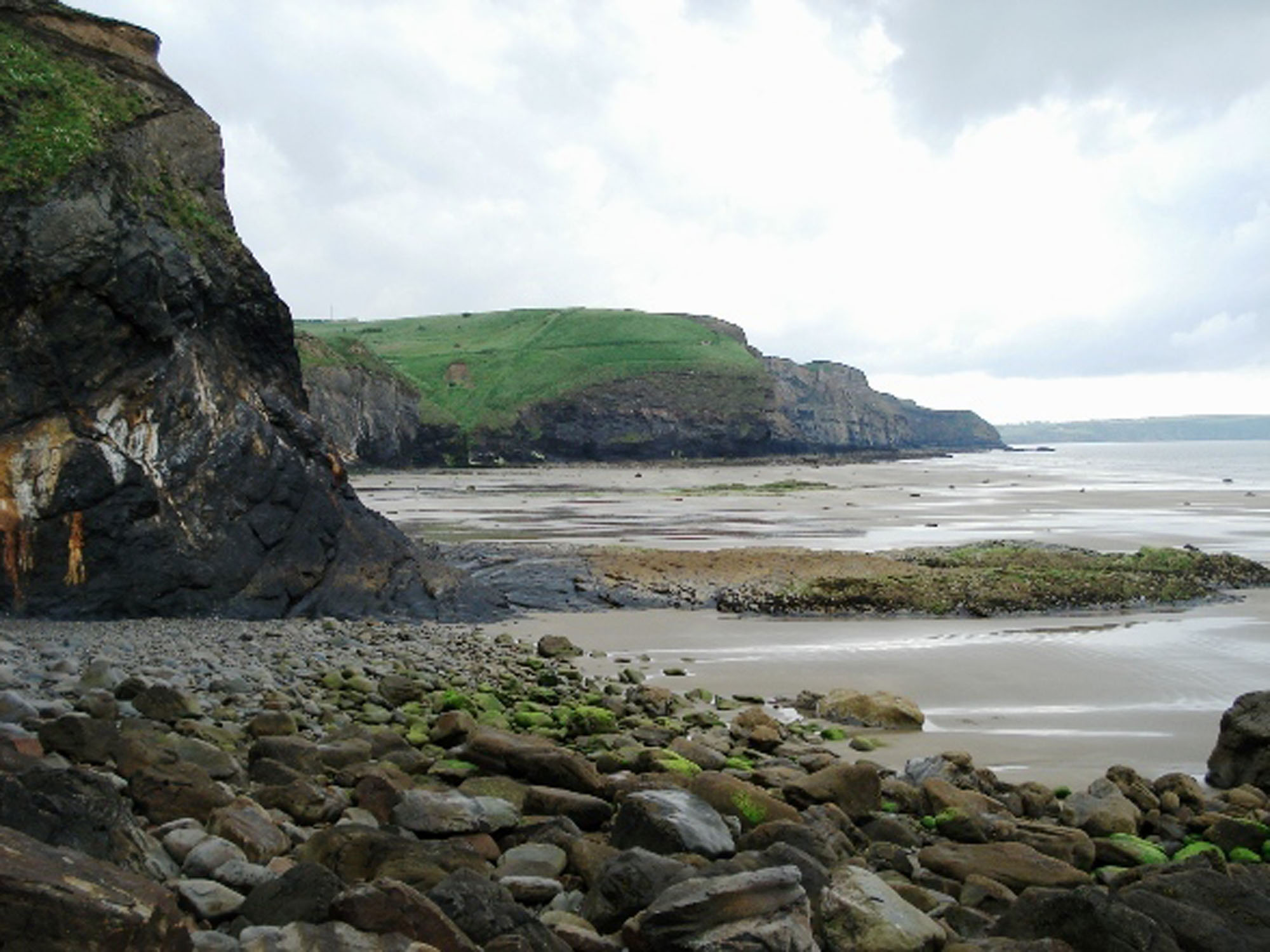 Abundant graptolites can be found at Druidston Haven. Like much of the Pembrokeshire Coast, the site is a site of special scientific interest (SSSI), which means that, although loose pebbles and smaller rocks may be investigated and collected, large boulders and the cliffs must not be damaged.

♦ Parking for a few cars can be found in lay-bys next to the small road that passes Druidston Haven. From here, it is a short walk to a path that leads to the beach. The path slopes downwards and is perhaps a hundred meters long.
♦ When the beach is reached, look around for blocks of shale. These can be found at the end of the path to the beach and in coves a few hundred meters to the north and the south.
♦ Ref: 51.81064°N, 5.10208°W

FIND FREQUENCY: ♦♦♦♦♦ – Once the right shale cobbles are located and split, graptolites should prove to be plentiful.
CHILDREN: ♦♦♦♦♦ – The beach is easily accessible and fairly hazard free. The tide at this location does not reach the cliffs until close to high tide.
ACCESS: ♦♦♦♦♦ – Parking can be found a short distance from the beach. Once on the beach, shale cobbles can immediately be found. Other areas with the cobbles are within a few hundred meters.
TYPE: – The cliffs at this location are mainly composed of shale, which is packed with graptolites. The cliffs themselves must not be damaged, but there are plenty of rolled shale blocks in the shingle, which can be split in search of graptolites.

Most fossils at Druidston Haven can be collected from the foreshore within the loose shale. Graptolites are abundant within the shale blocks at this location, with diplograptids being the most common.

Although many specimens are found on the bedding planes of the shale, many also appear to dissect the bedding planes and these break as the rock is split. This can be quite frustrating, but it is presumably caused by the extensive deformation of the rock layers in this area.

There are Carboniferous sandstone blocks to investigate as well as the shale. These contain poorly preserved plant fossils. Investigate any of the smaller blocks of shale that are found within the small bays at this location. Again, do not damage or hammer the cliffs or the larger blocks of rock. There are also large blocks of sandstone to be found to the north of the bay, but these should not be hammered either.

Druidston is a long, sandy beach enclosed by steep cliffs, composed of Ordovician mudstone shales from the Mydrim Shales Formation (461–451 Mya). These rocks are highly productive for the collection of graptolites found in the black shales.

The Pennant Sandstone Formation (310–307 Mya) is also present here. This is a sub-unit of the newly established Warwickshire Group, recognised as Silesian (Upper Carboniferous) of Westphalian Stage Bolsovian to Asturian Substage (previously part of the Upper Coal Measures Formation but now known as the Coal Measures Group) from which the collection of Carboniferous plant fossils is possible. It is the only section of Upper Westphalian (Carboniferous) rocks in the western area of the South Wales Coalfield.

The dark Ordovician shales at Druidston have been contorted by complex folds and faults and lifted above the Coal Measure rocks.

The rocks in Druidston Bay show unique, well-exposed Ordovician rocks, which demonstrate the effects of the Caledonian (400 Mya) and Variscan (290 Mya) mountain building periods. As a result, the rocks are folded, faulted and distorted and many of the graptolite fossils found here suffer from the same fate, being disappointingly broken.

Common sense will suffice at this location. However, watch the tide to make sure that you are not cut off in one of the small coves and do not stand too near the cliff face.

Most fossils at Druidston Haven can be collected from the foreshore within the loose shale, so specialist tools are not required and hammering the cliff is not allowed. However, a geological hammer, safety glasses and chisels for splitting loose rocks may be useful.