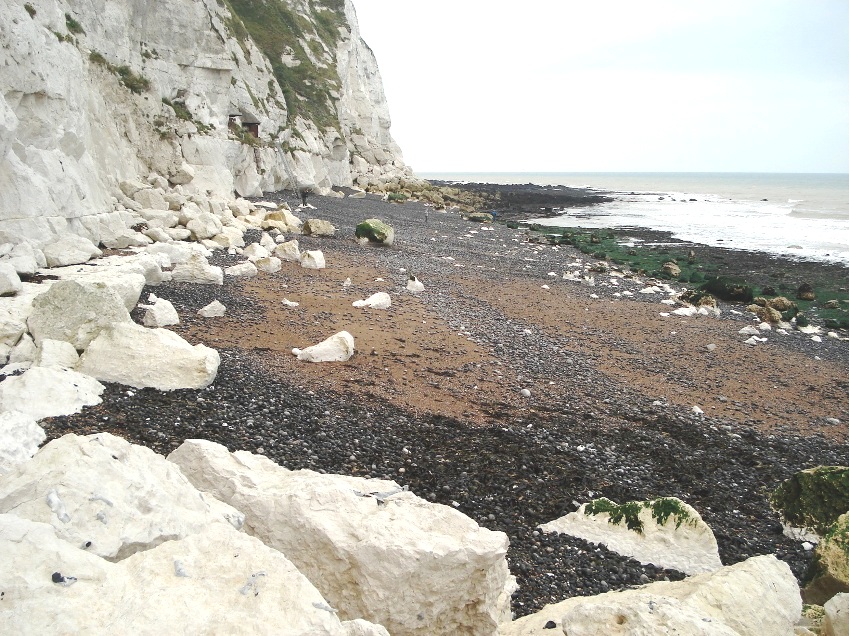 This is a classic location and well worth a visit, subject to the access problems discussed below. Fossils are found both in the chalk and as flint casts. The scenery here is magnificent and it is hard not to be impressed by this stretch of coastline. However, access is now more difficult, the dramatic stairs down the cliff having now been closed.

♦ Access to this site can be achieved by walking from St Margret’s Bay to the east, but this is an extremely long walk.
♦ Alternatively, access may just be possible by scrambling over the groynes on the beach from the harbour itself, but we do not recommend this.
♦ Ref: 51.13173°N, 1.34699°E

FIND FREQUENCY: ♦♦♦ – There is such a large amount of chalk to look over in search of fossils that you should always find at least a few good specimens. After a new rock fall, there is usually plenty to find.
CHILDREN: ♦ – Although this site is suitable for fit teenagers, even they may get tired by the long walk from St Margaret’s Bay – especially if carrying a bag full of rocks. And the possibility of being cut off by the tide makes this site very dangerous.
ACCESS: ♦ – The stairs down the cliffs (Akers Steps) are now permanently shut. Therefore, this is not a location to visit if you are after an easy stroll. It takes a very long time, walking across undulating terrain, before you reach the site from St Margaret’s Bay. And, to get the most out of this location, some scrambling and climbing over boulders is inevitable. In addition, there are no ways off the beach except to turn around and go back, so tides could catch people out if they are not extremely careful.
TYPE: – Fossils can be found in the cliffs, boulders and shingle. However, the cliffs should be avoided, as they are constantly crumbling and major falls are common. It is also worth looking among the flint pebbles and cobbles for sea urchins.

The most productive and accessible area for finding fossils at this location is the large rock fall to the west of the steps. As this huge quantity of rock erodes, fossils are slowly being revealed and will do so for years to come. The fossils will need to be extracted with a hammer and chisel. Other smaller rock falls to the east of the steps also contain fossils, but the boulders that comprise these are large and hard to climb. Fossil hunting from these is not recommended. Also, look within the ubiquitous flint nodules for sea urchins. The most productive area for finding these is to the east of the steps, rather than in the bay at their base. Although there is plenty of flint to be found in the bay, the nodules are very rolled here, unlike those found to the east. Micraster sp. sea urchins are the most common fossils here. Also present are Sternotaxis sp. and Echinocorys scutata, as well as more ornate regular urchins. Other fossils found are sponges, bivalves, brachiopods, gastropod moulds, the occasional ammonite and more. There is something for everyone.

The chalk exposed east of Dover belongs predominately to the White Chalk Subgroup (formerly Upper Chalk), which was deposited during the Turonian and Coniacian stages of the Late epoch between 89-85 million years ago (mya). At Langdon Stairs are exposed beds from near the base of the Lewes Nodular Chalk

Formation, to beds up to Whitaker’s Three-inch Flint Band in the Seaford Chalk Formation of the Coniarcian stage. The accessible sections at the base of the cliffs from Langdon Stairs to the South Foreland are primarily cut in the lower beds of the Lewes Nodular Chalk Formation.

The inaccessible parts of the cliff expose the upper beds of the Lewes Nodular Chalk Formation and the Seaford Chalk Formation with its conspicuous marker flint bands. The highest points in these cliffs are capped by a small thickness of Margate Chalk Member

East of Langdon Hole, where the stairs descend to the beach, a layer of white chalk interspersed with soft, grey chalk, can be seen at the foot of the cliff and on the foreshore. This layer within the Lewes Nodular Chalk Formation is known as a hardground complex. Dark-coloured nodular and sheet flints also appear as horizontal bands in the cliff face and as loose pebbles on the beach.

Common sense when collecting at all locations should always be used and prior knowledge of tide times is absolutely essential for this location. Do not hammer the cliffs and do not go too near any areas that look unstable. It is also easy to become cut off by the tide on the way back to St Margaret’s Bay, so make sure you visit on a retreating tide. In particular, the critical area is at Ness Point, to the south side of St Margaret’s at Cliffe. This can only be rounded at low tide and is extremely dangerous on a rising tide, once the sea has covered the platform.

Most fossils at Dover are found in boulders of chalk, so you will need a hammer, chisel and safety glasses to get these out.