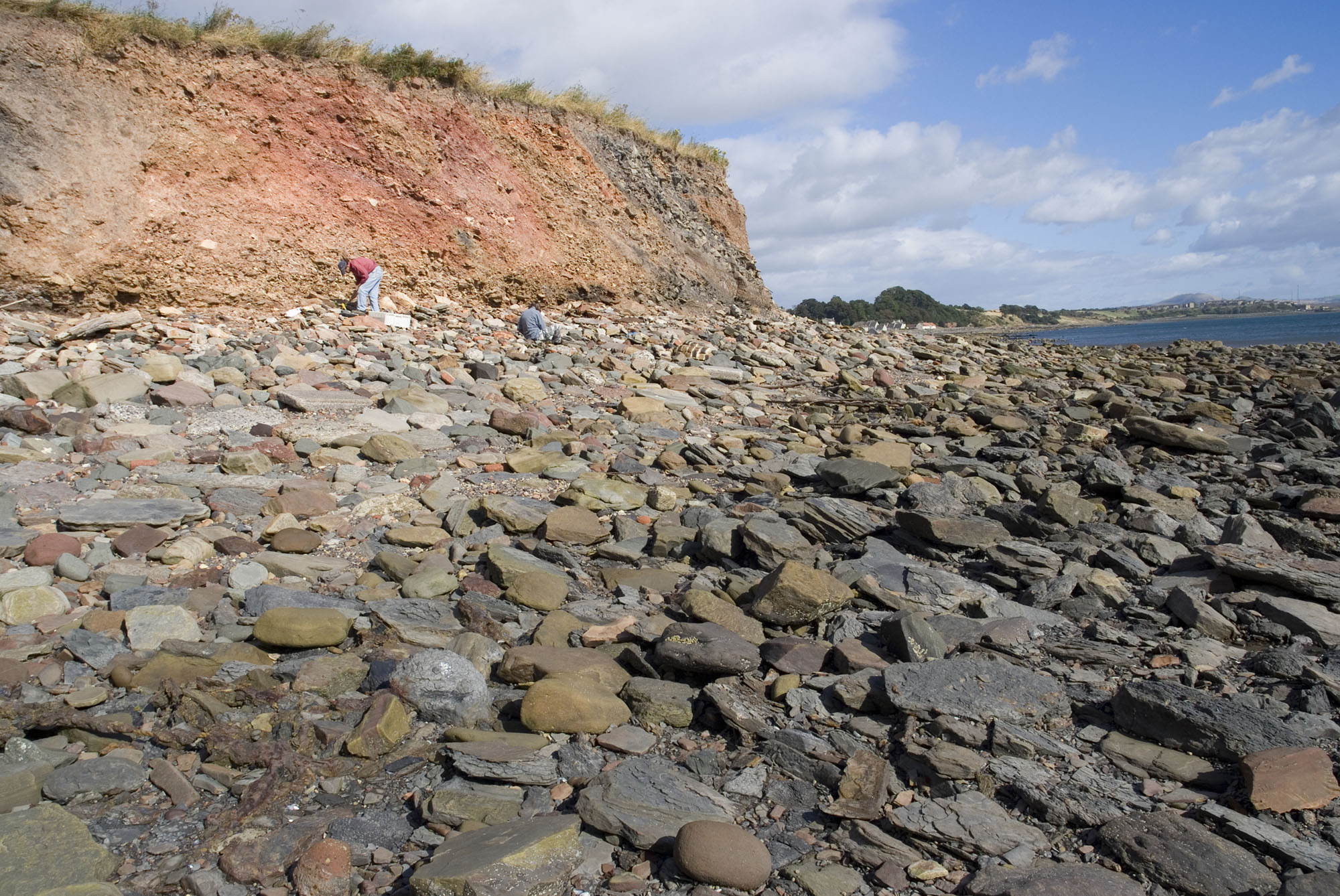 The sea regularly erodes a cliff of spoil from the now closed nearby Michael Colliery. This cliff contains many different carboniferous beds, some of which contain highly fossiliferous plant and marine bands, fossils from which can be found scattered along the foreshore.

♦ To the west of the village of East Wemyss, there is a coastal road leading to the local angling club. Just before the gates of this, there is a good car parking space.
♦ From here, walk west onto the shore and past the granite sea defence. You will come to a strange cliff with bricks, blocks and boulders in it. This is where the fossiliferous shale is coming from. The best area is the middle part of the cliff, where there are no bricks or building rubble.
♦ Ref: 56.15586°N, 3.06736°W

FIND FREQUENCY: ♦♦♦♦♦ – Fossils from East Wemyss are common. There are plenty of plant remains to be found and the sea often washes fresh fossiliferous shale from the cliffs.
CHILDREN: ♦♦♦♦ – East Wemyss is suitable for children, but care must be taken on the building rubble, which includes bricks that can fall from the first part of the cliff face.
ACCESS: ♦♦♦♦ – East Wemyss has excellent access to the beach – you do not have to walk far and there is a car park.
TYPE: – Most fossils are found within the shale on the foreshore. However, you will need a chisel pick to split the shale apart.

At East Wemyss, you never know what you might find, as the spoil from the cliff is from many different beds and bands. Plant remains are quite common. You will see plenty of blocks full of plant stems and small leafs of the same and different species of plants.
In addition to smaller plant remains, chunks of tree trunk can be collected from the foreshore. In addition, bivalves, such as the Unio, can be found in the marine bands.
Look for fossiliferous shale with plant remains. Once you find a block, you can then work on it by splitting it finely. Most of these blocks can be found on the foreshore. Some of them may not show any signs of plant remains since they have been washed by the sea, but splitting these may yield a few surprises.

Search along the foreshore for chunks of tree trunk. These can often be picked up and some of them can be in superb condition and are often not too big to carry.

The rocks exposed at East Wemyss are not in situ, they are in fact spoil heaps – manmade accumulations of dumped rock and rubbish from the surrounding area, probably from the construction of roads and housing in the last century and from the closed Michael Colliery. However, the fossiliferous rocks are being washed from the spoil heap and within the spoil is mining waste from a huge variety of different bands, including both marine and non-marine. Much of the rock exposed today was formed by sediment (sands and silts), carried and deposited by rivers across the region.

To the north of the shore the Scottish Upper Coal Measures Formation are displayed. These were formed 307 to 310 Mya during the Upper Carboniferous (Silesian) The Bolsovian-aged rocks comprise sandstone, siltstone and mudstone in repeated cycles and are commonly reddish brown or purple due to oxidation of originally grey strata.

The remainder of the coast, as far as East Wemyss and beyond is Scottish Middle Coal Measures Formation, formed 310 to 312 Mya. Rocks are sandstone, siltstone and mudstone in repeated cycles, that most commonly coarsen upwards but also fine upwards locally, with seatclay or seatearth and coal at the top. They are Upper Carboniferous (Silesian) from the Duckmantian.

Common sense when collecting at all locations should always be used and prior knowledge of tide times is essential. Take care when visiting this location, as the beach contains a lot of bricks from the cliffs of spoil.

Most of the fossils can be found by splitting shale, which is quite soft. However, you will need plenty of paper to wrap the plant remains carefully, and ensure that you treat these with consolidating material as soon as possible. The best advice is to try to take whole blocks of fossiliferous shale back home, split these open and preserve the fossils straightaway. Some fossils can be found just lying on the foreshore, such as chunks of tree trunk and so on.