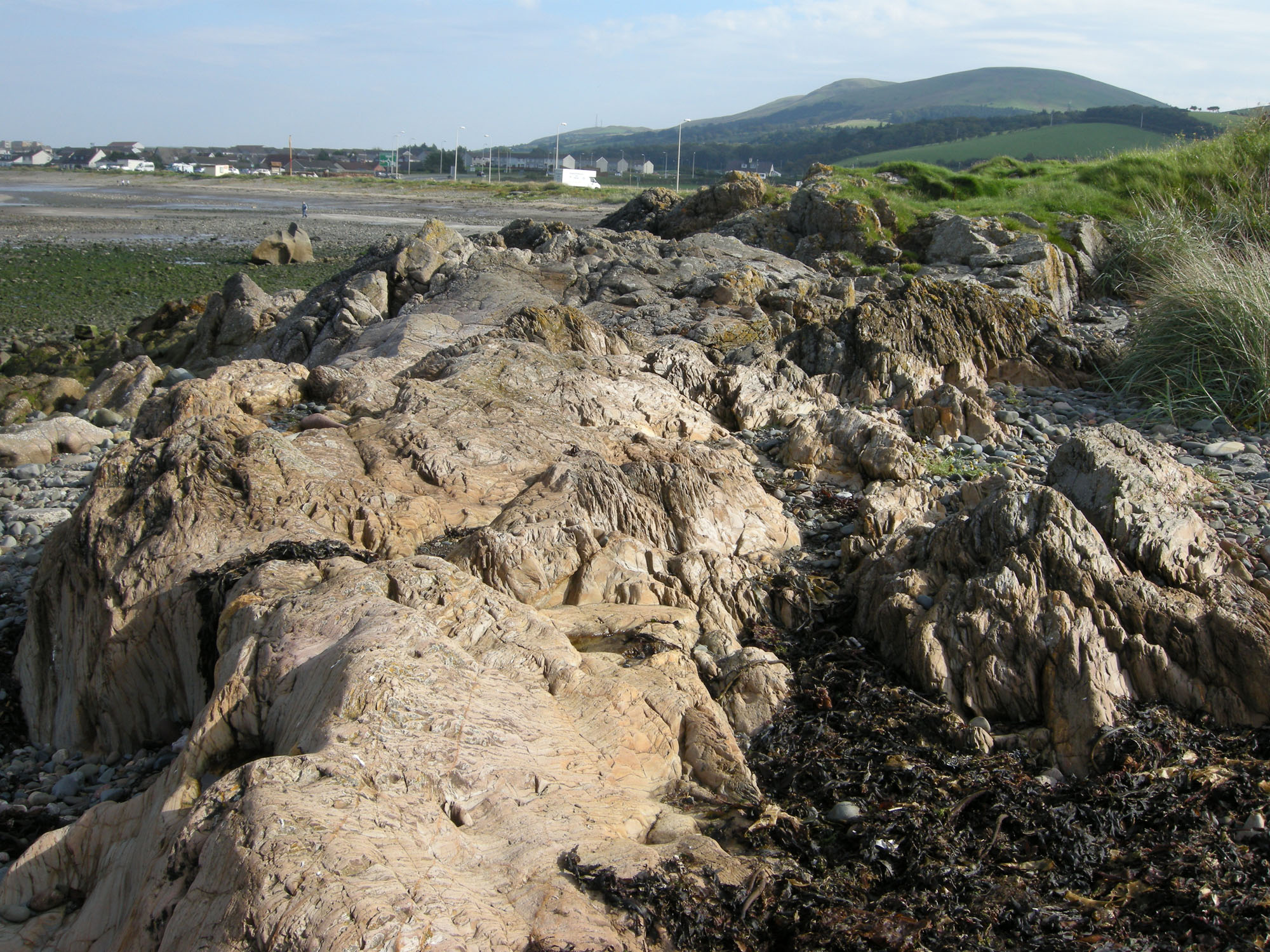 There are many areas to explore near Girvan, including Woodland Bay, Ardwell Bay and Kennedy’s Pass. This guide covers the rocks on the beach at Girvan (Shalloch), but this is not as productive as others in the area and success tends to rely on scouring tides.

♦ This guide looks at the rocks on the south of the beach at Girvan. Although Girvan is famous for fossils, these are actually from the neighbouring bays. The beach itself at Girvan is rarely productive, as the beds are below beach level.
♦ Park along the promenade and you will see some rocks to the south of the beach at Girvan. This is where you need to head to.
♦ We recommend that you visit Woodland Bay after visiting this beach, which is the next bay after the rocks at Shalloch discussed in this guide.
♦ Ref: 55.22653°N, 4.86202°W

FIND FREQUENCY: ♦ – The chance of finding fossils here is low, because the shale is nearly always covered with sand. Note that fossils are not found in the larger limestone blocks.
CHILDREN: ♦♦♦♦♦ – This beach is a nice sandy one that is suitable for children. The fossiliferous rocks are at the southern end and from there you can visit Woodland Bay.
ACCESS: ♦♦♦♦♦ – There is plenty of car parking along the promenade and it is a short walk to the rocks. Just a little further on, you can also visit Woodland Bay, which is more productive than the beach at Girvan.
TYPE: – Rocks are found on the foreshore, although the fossiliferous shale is nearly always covered up, making this site quite unproductive.

At the southern end of the beach at Girvan are some rocks of Ordovician age. These are part of the Shalloch Formation. Often the beds of shale are covered with sand, but, during favourable scouring conditions, you can find graptolites in the shale beneath beach level. The hard, unfossiliferous limestone can be seen at this end of the beach.
If you are using Girvan as a base to visit other locations in the area, it is worth a trip to this beach to see if there is any shale exposed. However, we highly recommend visiting Woodland Bay. Both sites can be done in one trip by visiting the beach at Girvan first and then walking further south to the next bay, which is Woodland Bay.

The rocks on the beach at Shalloch are from the Shalloch Formation of the Ordovician. They are aged between the Pusgillian and Cautleyan Stages and form part of the Whitehouse Subgroup of the Ardmillan Group of rocks from the Ashgill and are about 447 to 451 million years old.

They consist of a series of interbedded greenish grey mudstone shales and fine grained greywackes, with thin limestones in places. It is within the shale that the graptolites are found.The Shalloch Formation occurs south of Horse Rock, near Craigskelly.

Girvan Beach is comprised of Swanshaw Sanstone Formation formed during the Devonian and Silurian Periods.

Girvan is usually a fairly safe area, although the tide sometimes reaches the small embankment. This can easily be climbed and it is not really possible to be cut off here. However, the rocks can be quite hard so care should be taken when using sharp tools.

A hammer, splitting chisel and safety glasses are essential, although the shale is rarely exposed at this location.