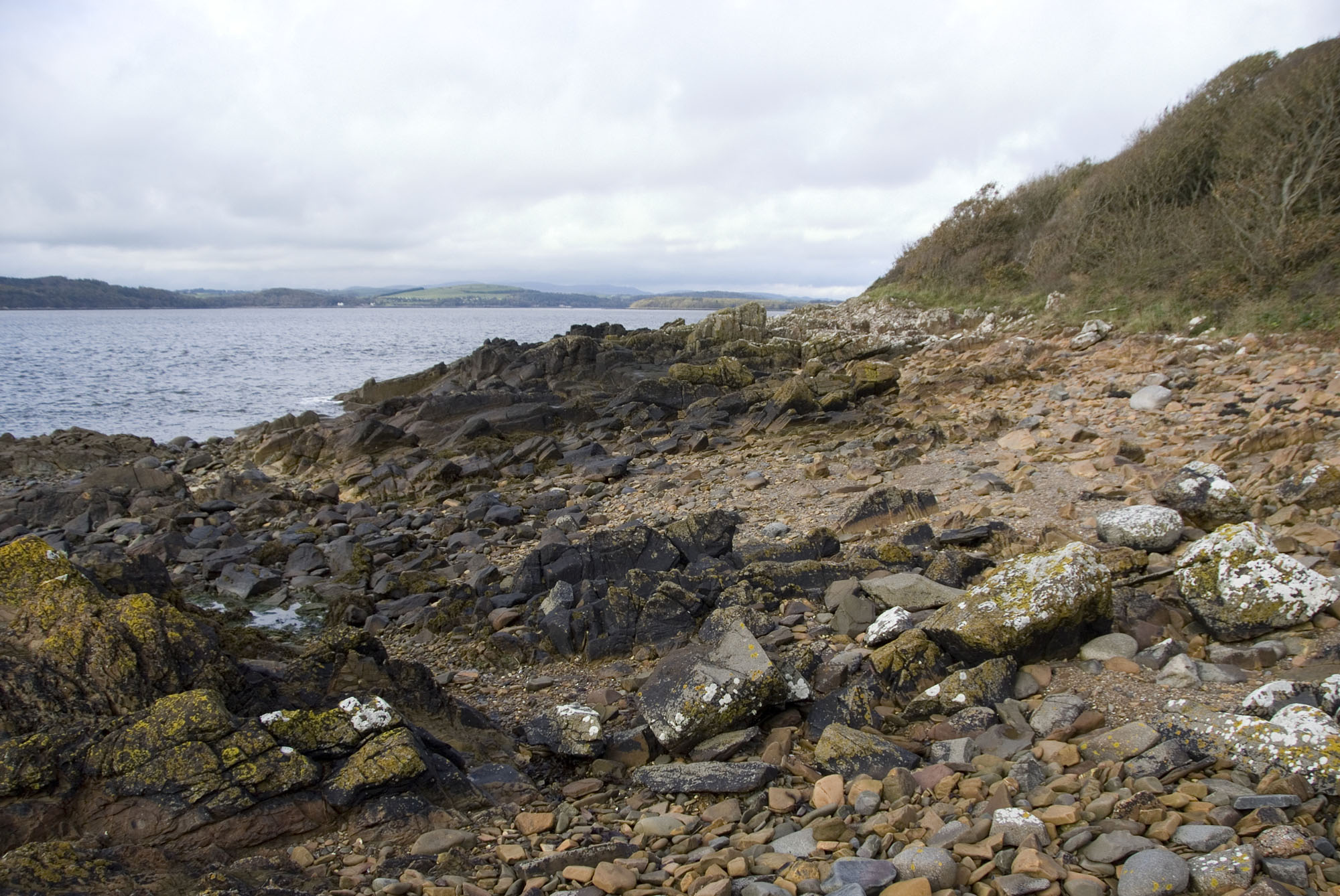 The coastline to the south of Kirkcudbright has low cliffs of shale, which is also exposed along the foreshore. There are several areas where the shales contain fossils from certain zones, although these are very hard to find. Graptolites, cephalopods and crustaceans can all be found.

♦ At Kirkcudbright, take the A711 south. There is a sharp bend where the road veers east at Mutehill, which is marked on OS 1:25,000 maps, and an unmarked road continues south. Follow this road, which runs close to the estuary.
♦ Further south, the road veers east and, just before it does, you can park beside the road. An unmade trackway (used by the lifeboat) continues south along the coast.
♦ Continue along this path and you will pass the lifeboat station. The next bay contains the fossiliferous rock at Torrs Point. There are others places, but these are inside the firing range and must be avoided.
♦ Ref: 54.80421°N, 4.05377°W

FIND FREQUENCY: ♦♦ – The fossils at Kirkcudbright are found in only a few thin zones. This makes finding them very hard. It is mostly a case of splitting shales until you find the correct zones.
CHILDREN: ♦♦ – We do not recommend children to visit this site. It is a long walk and the rocks on the foreshore can be slippery.
ACCESS: ♦♦♦ – The location is easy to find and finding parking is fairly simple. However, it is a long walk, although over fairly easy ground. You will need to keep hopping off track into each bay to access the various different sites.
TYPE: – Fossils can be found on the foreshore in the shales and silts. You will need to split these layers to find the correct zones.

There are several sites along the coastline south of Kirkcudbright. The most fossiliferous are at Long Robin, Torrs Point, Balmae Ha’en, Howwell Bay and Mullock Bay. This guide concentrates on the first two and the others are all inside a firing range for which you will need permission to visit. Long Robin and Torrs Point can be explored without any restrictions.

Along the route, you will pass the lifeboat station. South of this is a very small bay. The next and larger bay is Long Robin and is marked on the OS 1:25,000 map. Here, you can find Silurian graptolites in the shales on the foreshore. However, it will take a while to find the correct zones, but try splitting shale at various locations and, once you find the correct zone, fossils can be found.

From here, go back to the main footpath and follow the path through the woods. You will pass another smaller bay and will eventually reach an area of rock that is Torrs Point. Here, you will see some rocks with vertical to 75o bedding strata on the foreshore. Split the shale here to reveal graptolites, cephalopods and crustaceans.

The best fossils are found at Balmae He’en, which is another 2km southeast along the coast. Here, the same fossils as Torrs Point can be found, but they are more abundant. Note that you will need to check firing times and you will need to get permission to visit this third site.

The sedimentary bedrock of the Silurian, exposed along the east side of Kirkcudbright Bay are from the Ross Formation, which was formed 423 to 428 Mya. The Ross Formation is dominated by sequences (up to 50 m thick) comprising turbidite sandstone units with sporadic mudstone inter-beds, which alternate with sequences up to 4 m thick with more thinly bedded sandstone. Some of these coarse-grained sandstone beds contain small shelly fossils such as crinoid ossicles, brachiopods and solitary corals. Graptolites are relatively common

This is part of the Hawick Group and consists of laminated fossiliferous carbonaceous siltstone beds.

The geology at this location has a pending upgrade from the BGS.

Kirkcudbright mostly has low cliffs and a footpath that takes you around the coastline to access the various sites. Although the tide does reach the cliff, as you drop down in each bay from the footpath, the risk of being cut off is very small. However, to access the beds on the foreshore, this must be done on a low tide and the rocks can be very slippery.

A splitting pick will be useful at this location. You will also need plenty of paper to wrap up your finds.