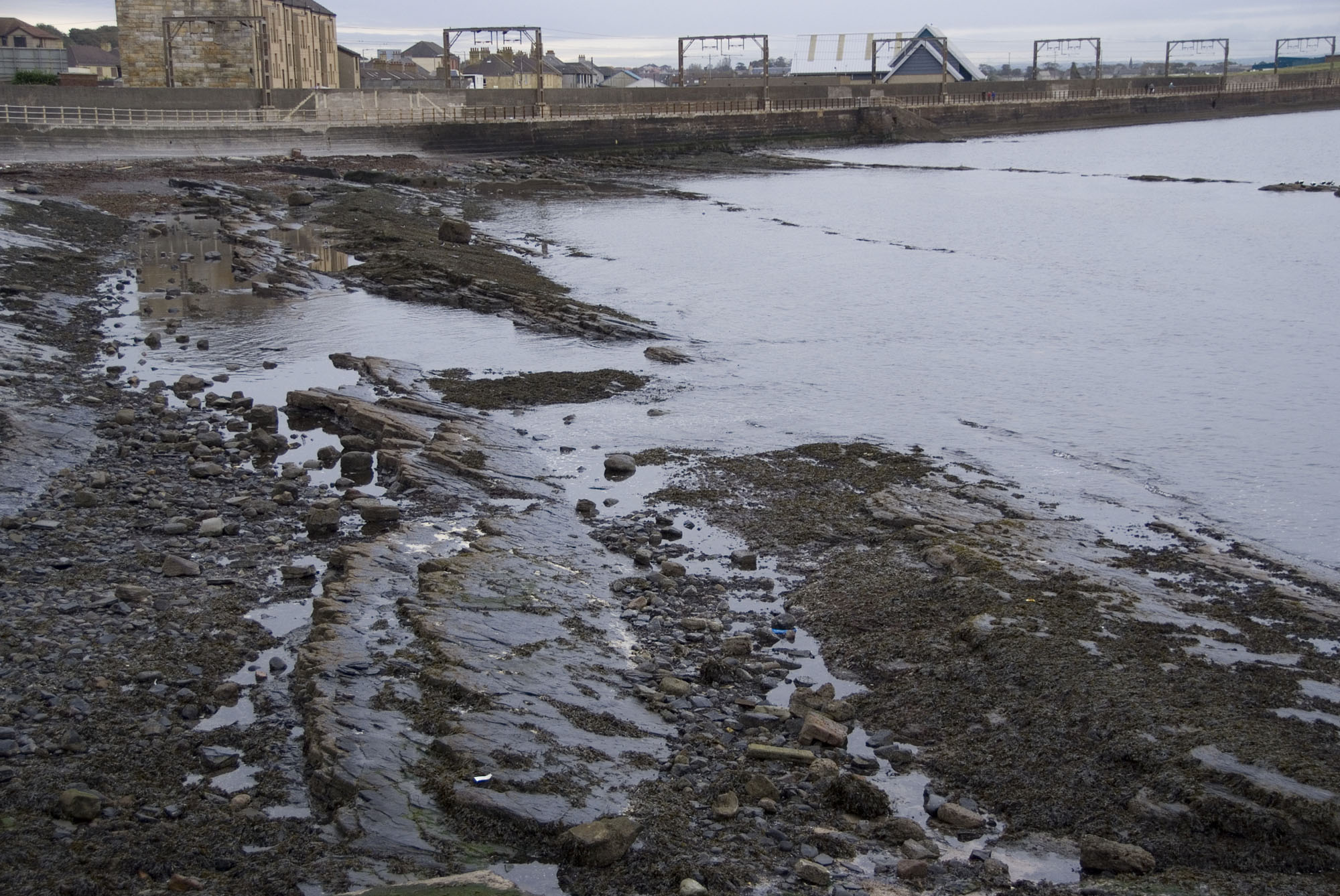 A small area at Saltcoats yields plant remains. Although much of the rich Carboniferous beds have been washed away by the sea, and fresh beds have not been exposed due to the sea defence, you can still occasionally find plant remains in the shale on the foreshore. However, most of the shale today is unproductive.

♦ At Saltcoats, head for Seaview Road. This is generally a good starting point with free car parking. The road can be found off the main A738 running through the town centre.
♦ Near a sharp bend and just south of the railway crossing, take Nineyard Street and then take the next left, which will take you to Seaview Road.
♦ The best exposures are to the west of the car park. There, you will see plenty of shale to look through at Seaview Road, but they are much less productive. It is best to walk west towards the pools.
♦ Ref: 55.47424°N, 4.52001°W

FIND FREQUENCY: ♦♦ – Saltcoats was once a location highly rich in plant remains. Unfortunately, it is now over collected and the beds are hard to find. However, you should find some freshwater bivalves.
CHILDREN: ♦ – We do not recommend children to visit this site. It is dangerous and the rocks are very slippery. It is also easy to get cut off by the tide.
ACCESS: ♦♦ – The location is easy to find and getting there involves a very short walk. The problem is that the town is very busy. Be warned that, out of season, most of the toilets are locked.
TYPE: – Fossils are found on the foreshore in the shales and silts. However, these can be hard to find, because they are generally in thin bands, especially around the dykes.

Although fossil plants are today less common, you should still be able to find some good freshwater fossils, such as bivalves and the roots of Stigmaria. Calamites and Lepidodendron fragments are also common. However, if you are lucky enough to find plant remains, they are mostly from a seed fern (Neuropteris).
There are a series of dykes that are exposed during low tide and it is a good idea to check these out. However, the best area for collecting is around South Beach, although the shales here are often covered in sand.

The Carboniferous aged Scottish Coal Measures Formation at Saltcoats (which are about 310myrs old) have been long studied in great detail. Although the exposures are not so good today, the almost full succession can still be seen. The Coal Measures vary from thin sandstones with coal seams, to silts and shales and limestones.

The most prominent bed at Saltcoats is the Saltcoats Main Sill. This is igneous intrusion is split into further beds, which include the minerals teschenite, picrite and banded teschenite. These beds are mostly comprised of picrate and were formed as an igneous bedrock, approximately 271 to 313 Mya during the Permian and Carboniferous.

The Main Sill can be found just south of the southern pool. Most of the fossils are found just to the north of this main sill and within the Scottish Lower Coal Measures Formation, formed approximately 312 to 313 Mya, during the Langsettian substage of the Westphalian Stage.

Westwards along the coast at South Bay, are outcrops of Limestone Coal Formation (Pendleian l322 to 326 Mya) from the Clackmannan Group

The most prominent bed at Saltcoats is the Saltcoats Main Sill. This is split into further beds, which include the minerals teschenite, picrite and banded teschenite. These beds can be found just south of the southern pool. Most of the fossils are found just to the north of this main sill.

Saltcoats has several dangers, the worst of which is the ease in which you can become cut off by the tide. There is limited number of steps down to the shore, with a very high seawall. Therefore, only collect on a low tide and ensure you have plenty of time to get back. In addition, the rocks are very slippery.

A pick is very handy at this location. You will also need plenty of paper in which to wrap your finds