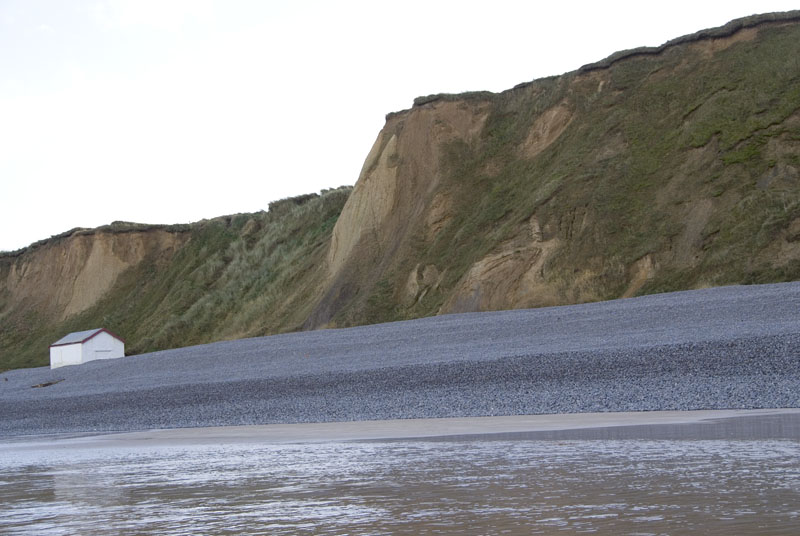 Near the lifeboat station on the foreshore, chalk is exposed during scouring conditions. Corals and shark remains have been found at this location at these times, although scouring only happens a few times a year. If you do visit during favourable conditions, you should find some nice specimens.

♦ Sheringham is a very popular town in Norfolk, especially well known for its steam train.
♦ Although a small town, the actual location can be hard to find because, if you head through the town and follow the main road, you will end up on the wrong side and will have to go back to the main town.
♦ There are two main roads that lead into Sheringham, the easiest is the one to the west. You need to find the Esplanade, which is to the west of the town. Here, there is plenty of space to park and you can easily access the shore near the lifeboat station.
♦ Ref: 52.93760°N, 1.27383°E

FIND FREQUENCY: ♦♦ – The problem with Sheringham is it doesn’t scour very often. Once the chalk is well exposed, then there is lots to be found. Sometimes, the chalk also is covered in algae, making collecting difficult.
CHILDREN: ♦♦♦♦ – This location is suitable for children. However, they must keep away from the cliffs and from the lifeboat station. The foreshore is quite safe for collecting, but, if the chalk is exposed, it can be slippery.
ACCESS: ♦♦♦ – Once you find the right parking area to the west of the town, parking is easy and access is quick. In fact, you don’t have to walk far before you reach the lifeboat station.
TYPE: – Fossils are found in the foreshore chalk exposures. Sheringham has cliffs, but these are glacial and you won’t find fossils in these.

The chalk at Sheringham yields corals, echinoids, brachiopods and oysters. Shark remains have been found, including the occasional tooth and vertebrae, although these are uncommon. Indeed, Sheringham is perhaps well known and extensively documented for its famous Fish Bed, which is full of fish remains, including fish vertebrae and teeth. This can be found to the west near the lifeboat station, which is the area where most of the best specimens from Sheringham are found. The chalk here is quite soft and it is easy to remove fossils. This location does depend on scouring, so it is not always that productive. In fact, it only scours a few times a year.

The cliffs themselves at Sheringham are glacial and, during summer months, this is all you will see. These vary in height and consist of silts and sands. Beeston cliff is composed of glaciotectonised Happisburgh Till (glacial sediments of the Anglian stage). These are the same sediments and processes that built the Cromer Ridge

Exposed on the foreshore, especially near the lifeboat station, is the chalk. This is often on view during scouring conditions during the spring and autumn months, but can also be seen during the winter. The chalk is the Beeston Chalk Member of the White Chalk Subgroup, showing soft white chalk with irregular seams of large flints.

Common sense when collecting at all locations should be used and knowledge of tide times is essential. At Sheringham, the sea can sometime reach the base of the cliff and you can become cut off. The foreshore can also be slippery and rocky, and keep clear of the lifeboat station.

The chalk at Sheringham is very soft and all you need is a small knife or trowel. You can also take a pick, but you will certainly need paper to wrap up your finds.