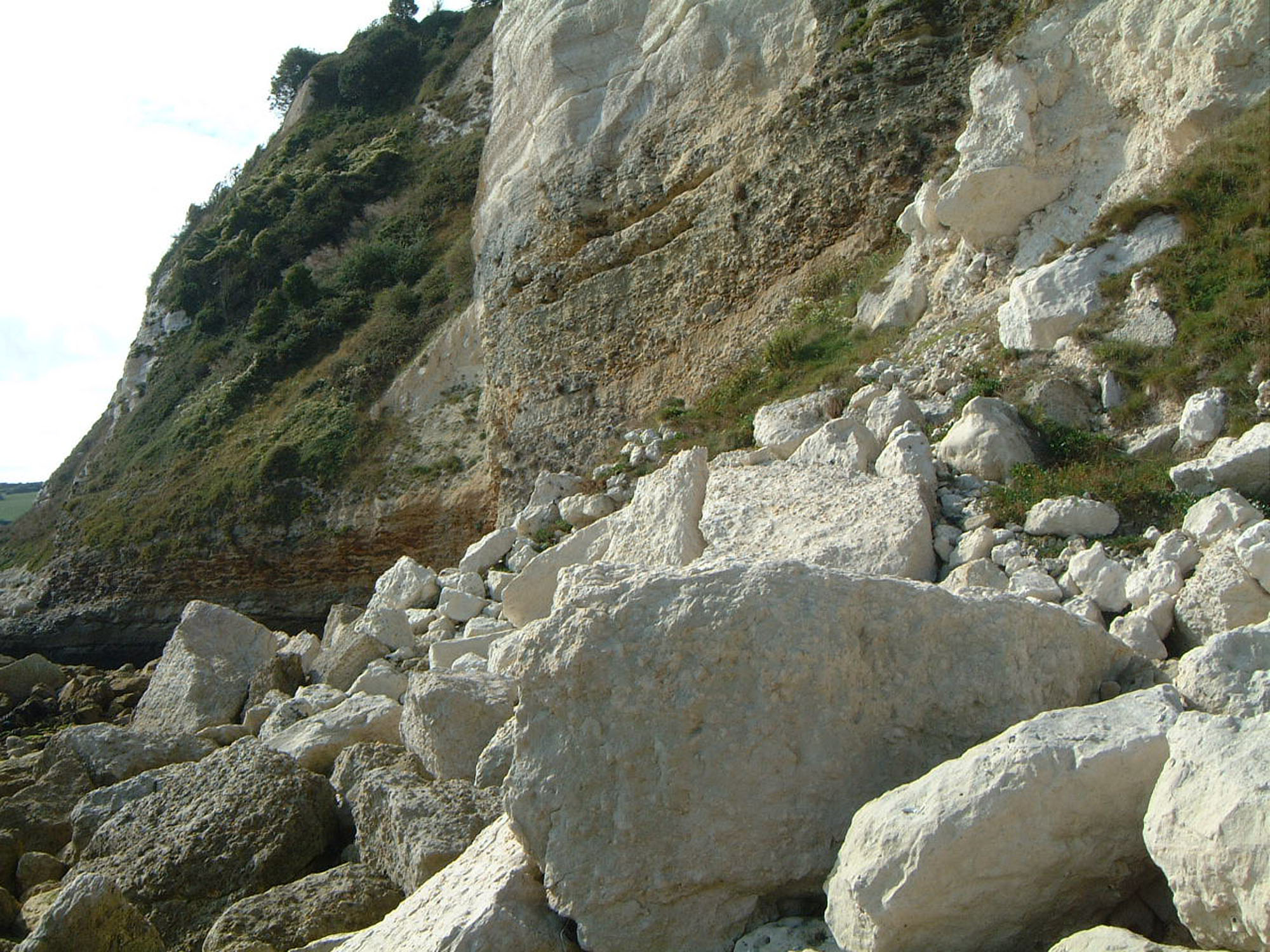 The Chalk and Upper Greensand at Seaton is highly fossiliferous and makes for ideal collecting. Ammonites, echinoids, brachiopods and bivalves can all be found. There are plenty of rocks and fresh falls to look through.

♦ To access the cliffs at Seaton, drive down to the promenade, where there are good parking facilities.
♦ Head to the west, where the cliffs contain a varied geology of Lias, chalk, greensand and rocks from the Triassic. This is where the fossils are mostly found.
♦ Note that you cannot cross the river from the beach to access the cliffs at Seaton. Therefore, you should use the road or footbridge near the harbour.
♦ You can also walk towards Beer Head at the eastern end of the down, visiting the Triassic cliffs and Upper Greensand on the way.♦ Ref: 50.70216°N, 3.05201°W

FIND FREQUENCY: ♦♦♦ – The variety of geology at Seaton means you never know what you might find. Echinoids and molluscs are the most common find.
CHILDREN: ♦♦♦♦ – This location is suitable for children and has a large car park close to the town, where toilets and cafes can also be found.
ACCESS: ♦♦♦♦♦ – There is a short walk to the foreshore, and plenty of parking and lots of shops nearby. Seaton is a major tourist resort and so can be busy during peak times.
TYPE: – Most fossils are found in the fallen blocks, which can be seen on the foreshore and at the bottom of the cliffs in the scree.

There is a vast variety of shells at Seaton, and ammonites and echinoids can also occasionally be found. The best place to look is in the fallen lumps of Upper Greensand, especially the ones that have been weathered for some time. Shells can easily be removed from these, but are brittle and fragile. Another good collecting idea is to look for areas of any ‘soft’ greensand, which is a dark green colour, and trowels and knives can be used to extract shells from this. This soft layer is usually found at the base of the cliff, where it has slipped from higher up. Take a heavy hammer to break apart any lumps of Upper Greensand, as you never know what could be inside. However, fossils from this rock can also be quite worn and sometimes difficult to see.

Most of the sea urchin spines and echinoids are found in the very large boulders of chalk, which are extremely hard but weather badly. Removing fossils from these is quite difficult, but many of the finds at this location are made by searching through these.

At Seaton, what used to be known as the Middle Chalk (now the Seaton Chalk Formation of the White Chalk Subgroup) is particularly interesting for the Holaster planus Zone. This chalk extends to Beer Head, which is the most westerly outcrop.

The location is also ideal for collecting from the Upper Greensand as the entire series can be seen and the foreshore is full of various greensand rocks and some from layers of chert. Below the Upper Greensand beds is the Foxmould Member, consisting of sandstone, glauconitic, calcareous in part, greenish grey weathering to foxy brown (reddish-brown) sand; concretionary “doggers” and tabular sandy limestones at several levels. This, too, is part of the Upper Greensand Formation

The red cliffs just before the Chalk are part of the Triassic Mercia Mudstone. These are not fossiliferous. It is mud and desert loess from the interior of a desert environment of about 250 million year ago. At this time, the British region was at a latitude about that of the modern Sahara Desert. There are deposits of gypsum in the Mercia Mudstone.

Common sense when collecting at all locations should be used and prior knowledge of tide times is essential. The sea often reaches the base of the cliffs at Seaton and it is easy to be cut off with no access to Beer or Seaton once the Upper Greensand has been covered by the tide. In addition, be careful of both falling rocks and slippery seaweed.

Fossils here are very hard, so either containers or bags are suitable to get them home. However, you will need a heavy hammer, chisel and safety goggles to split some of the rocks. It is also a good idea to take a trowel or knife to extract some excellent fossil shells.

Seaton is part of the Jurassic World Heritage Coastline. However there are no restrictions other than following our code of conduct below.