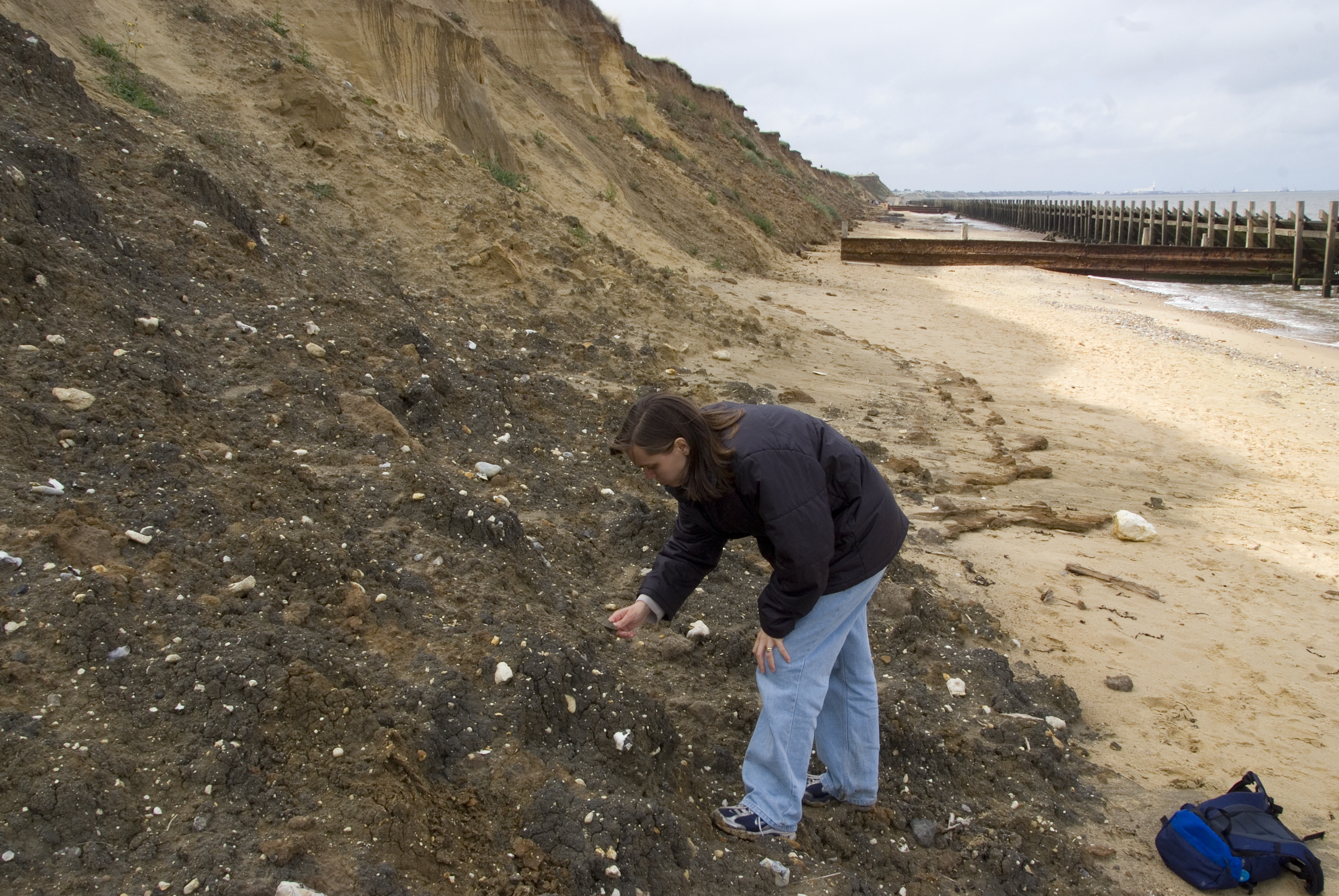 Ammonites, belemnites and reptile remains can all be found in the boulder clay, along with many erratic rocks full of shells. The foreshore sometimes yields fossil wood, seeds and bone from the Forest Bed during times of scouring. This used to be a highly productive site, but the sea defence limits scouring.

♦ Drive to Hopton-on-Sea. From the south, you should see Beach Road on the right hand side, which you should take.
♦ There is a signpost saying ‘No Access to Beach’. This is due to the limited parking. However, just before this sign, Beach Road veers to the right as a narrow lane.
♦ At the end of this road, there are spaces for three cars on the left hand side.
♦ There is no access from the village of Corton anymore, because the sea originally destroyed part of the sea defences and the answer was to dump granite blocks in front of the cliff. Therefore, you will have to park at Hopton-on-Sea. The old footpath along the seawall is also blocked.
♦ Ref: 52.52986°N, 1.74110°E

FIND FREQUENCY: ♦♦♦ – Although the sea defences limit collecting, the beach does still scour and rain produces fresh exposures of boulder clay. Fossils can also be found after storms when the sea defences fail. Belemnites are the most common finds here and the best time to collect is after heavy rain, which washes the boulder clay from the top beds down the cliff.
CHILDREN: ♦♦♦♦ – The wave baffles keep the sea away, so this area is safe for children providing they keep away from the vertical parts of the cliffs. As the sea no longer washes these and the rain is responsible for the erosion, most of the cliff is at a 45-degree angle or less, but be careful especially after heavy rain. There is an excellent sandy beach for children to play on at Hopton-on-Sea.
ACCESS: ♦♦♦ – Access has changed for this location. You used to be able to park at Pleasurewood Hills and walk along the seawall. However, after sea defence repairs, this is now closed, but the alternative route is much safer and suitable for children. If you park at Hopton-on-Sea, it is a fairly short walk to the site and sandy beaches make it ideal for families.
TYPE: – Most fossils are found in the scree slopes where the boulder clay has slipped down from the top after heavy rain. Large erratics, which have fallen down and have been washed out, can also be found along the beach, especially near the wave baffles. Some of these erratics contain fossils and can be split with a hammer. During scouring, the Forest Bed can be seen exposed on the foreshore, which also contains fossil wood and seeds.

From the boulder clay, a wide variety of fossils can be found including ammonites, reptile remains, belemnites and shells. Ichthyosaur vertebras have been found in these slippages and also within nodules in the clay. There are many Jurassic erratics and occasionally, if you split some of these, they will yield fossils, especially shells. Fossils can also be found in the chalk erratics, including echinoids, but these are less common.

On the foreshore at the northern end of the cliffs, blue Forest Beds rich in fossil wood and seeds can sometimes also yield bones. Note that the brown Forest Bed at the southern end is unfossiliferous.

Collecting is best done after intense rainfall, which causes slippages from the top boulder clay. Cliff falls are not common, but slippages take place regularly during winter months, which are sufficient for collecting purposes.

The second ice advance during the Pliocene gave rise to what has been unofficially termed the ‘Lower Chalky Boulder Clay’, which consists of Jurassic rocks carried within the ice sheet and deposited here during the Ice Age.

This clay rests on the Corton Beds, a local term and contains fossils, including various types of ammonites, bones and shells. As it has been transported from sites elsewhere, you can find a huge variation of fossils. It is a shame that Corton is protected from the sea, otherwise it would be a highly productive site.

Common sense when collecting at all locations should be used and knowledge of tide times is essential. At Corton, the wave baffles keep back the sea, although during stormy conditions, waves can crash over these. Cliff falls do occur after heavy rain and the main danger is at the southern end of Corton.

Most of the fossils at Corton are found by searching on the foreshore, but a pick is handy for any large boulders in the clay. You should also take bags or specimen field boxes to put your finds in.

There are no restrictions at this site, but please follow our code of conduct below.
It is important to follow our ‘Code of Conduct’ when collecting fossils or visiting any site. Please also read our ‘Terms and Conditions‘