The coastline between Kingsdown and St Margaret’s Bay is made up of towering chalk cliffs. Some spectacular collapses have taken place over recent years, yielding a vast quantity of fresh chalk and flints to look over. However (and unfortunately), the rocks here are poorly fossiliferous.

FIND FREQUENCY: ♦♦♦
Impressive chalk fossils are rare at this location. The majority of finds consist of flint fossils, worn out of the chalk and concentrated on the foreshore.
CHILDREN: ♦♦♦♦ – The walk between Kingsdown and St Margaret’s Bay is quite a long one and, in places, piles of chalk rubble need to be scrambled over. Therefore, this location is not recommended for younger children.
ACCESS: ♦♦♦♦ – Free, on-road parking can be found at Oldstairs Bay at Kingsdown to the north or in the pay and display car park at St Margaret’s Bay to the south. The section between the two places is fairly long and could prove difficult for some in parts.
TYPE: – Some fossils can be seen in the chalk cliffs and can be safely extracted from the cliff falls below. However, most fossils are found on the foreshore, which is covered with flint pebbles eroded from the chalk.

At the start of the Kingsdown section, you are restricted to a narrow path at the bottom of the cliffs. To your seaward side is an old firing range, which is fenced off and out of bounds. The strip of land below the cliffs here has SSSI status and should be treated accordingly, with no hammering on the bedrock or cliffs. At the end of the path, you cross a sea wall onto the beach proper and here the restrictions end.

With the huge abundance of chalk on the beach here, you would be forgiven for thinking that fossils will be easy to find. Unfortunately, this is not the case. The rocks here are poorly fossiliferous, with the most common fossils being broken pieces of inoceramid bivalve shells.

However, weathering out of the massive piles of chalk (which are the result of cliff falls) are large quantities of flints and these can have small fossils on their surfaces. Flint sponges and the occasional sea urchin can also be found on the foreshore. Keep your eyes peeled and you should find something. 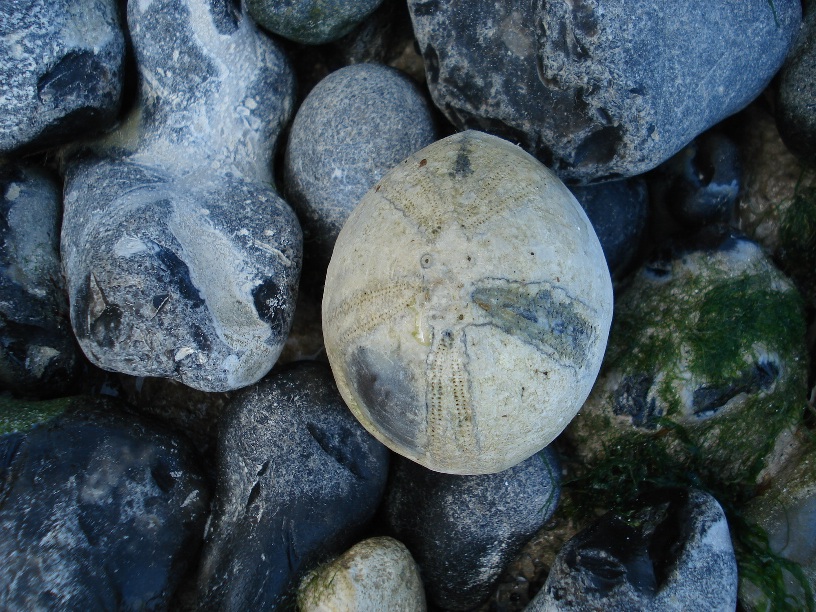 The 7 km of sea cliffs from  Dover to Kingsdown , are the classic ‘White Cliffs of Dover’. Much of the White Chalk Subgroup stratigraphy here, can be correlated in detail with the standard succession in the Southern Province. One of the most conspicuous features of these cliffs is the so-called ‘Basal Complex’, the succession of exceptionally large flints and marl.

The ‘Basal Complex’ is overlain by beds of highly fossiliferous nodular chalks which are known as the ‘Dover Chalk Rock’ and represent a condensed and, in some aspects, a more fossiliferous development of the Kingston Nodular Beds of Sussex. These beds contain Upper Turonian ammonites and inoceramid bivalves that are critical for international correlation 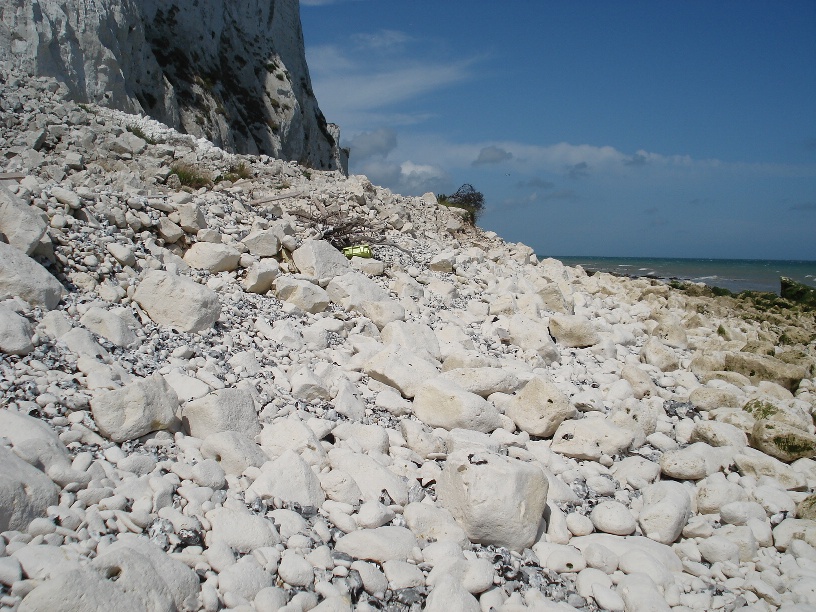 Common sense when collecting at all locations should always be used and you should check tide times before visiting. As there is no way off of the beach between Kingsdown and St Margaret’s Bay, it is essential that you begin your walk on a retreating tide and allow yourself more than enough time to walk the three and a bit kilometres over rocky ground between the two access points. There is no way off of the beach between St Margaret’s Bay and Kingsdown, although, in places, the rock falls are piled up well above the high water mark. Do not hammer into the cliff face as this may cause rocks to fall on you. The foreshore can also be slippery due to mud and weed, and the middle section is quite remote. In addition, mobile phones generally only pick up French reception here – so make sure you tell someone where you are and what time you expect to be back.

A good, sturdy bag and plenty of packing material, as well as a hammer and chisel, are needed at this location (but note the SSSI restrictions referred to below.) Waterproof boots with a good grip will also come in handy.