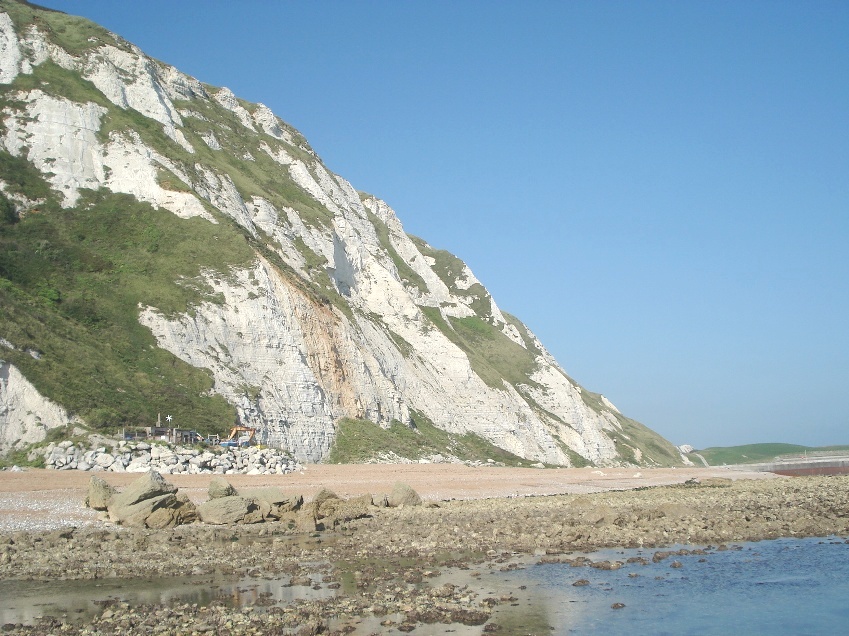 The Lower Chalk exposed at Samphire Hoe is highly fossiliferous. Brachiopods are most commonly found, with corals, urchins, ammonites, sharks’ teeth and more also present. Microfossils are extremely abundant within the chalk and can be extracted relatively easily from rock samples taken home

♦ Follow the A20 along the seafront at Dover, towards Folkestone. You will go past the Western Docks and begin to ascend on a duel carriageway. Follow this for approximately 1.6km, until you see a turning for Samphire Hoe – take this. You may have to wait a minute or so in a layby before the traffic lights here change to green and you can enter the tunnel down to the Hoe.
♦ At the end of the tunnel, continue on to the car park where you will have to pay for a ticket. There is also a shop and other facilities here.
♦ Follow one of the paths to the west across the nature reserve. After about 15 minutes, you will reach the beach, with its towering cliffs.
♦ Ref: 51.10480°N, 1.27553°E

FIND FREQUENCY: ♦♦♦♦♦ – Fossils weather out of the cliffs and boulders at the base of the cliffs quite quickly, so there should always be something to find. Many microfossils are also guaranteed.
CHILDREN: ♦♦♦ – It is an easy walk of about 20 minutes to reach the beach where fossils can be found. Hazards are minimal, but children should be kept away from the base of the cliffs.
TYPE: – Fossils are most abundant when seen weathering out of the cliffs, but it may be dangerous to collect these. They are also often plentiful on the surfaces of weathered boulders and fresh cliff fall debris. The beach is composed of flint pebbles and it is worth having a look through these for occasional flint urchins.
ACCESS: ♦♦♦♦ – There is plenty of parking in a pay and display car park. The walk across the Hoe to access the beach is easy. Once the beach is reached, fossils can be found almost immediately.

Brachiopods are abundant and easily collected either from the chalk using a hammer and chisel, or loose from weathered material. Other fossils to find include worm tubes, corals, bivalves, gastropods, fish, shark remains and so on. If you are lucky you may find chalk ammonites, some of which can be over 30cm in width. Some very pretty pyrite crystals also occur, so it is worth looking out for these.

Although the cliffs contain abundant fossils, it is not advisable to collect from these due to the danger from rock falls. If in doubt it is best to avoid them. There are plenty of boulders at the base of the cliffs, which also contain fossils. Try to make a note of the colour of the chalk from which you are extracting fossils. You may find that this helps when trying to find your next fossiliferous boulder. It is also a good idea to take home a sample of the chalk for later processing to obtain microfossils.

The Grey Chalk Subgroup (formerly the Lower Chalk) represented at Samphire Hoe is Cretaceous in age, from the Cenomanian stage (100.5 _93.9 Mya)

The Chalk Marl is characterised by relatively dark, rhythmically bedded sediments. Flinty Chalk is present at the cliff top. Here, the Plenus Marls and the Holywell Nodular Chalk are clearly visible in the cliff section.

This is a fairly safe location with few hazards. The sea does not reach the cliffs, except at the very end of the beach, so fossil collecting can be carried out regardless of tides. However, the cliff can be unstable, so avoid hammering into it.

Most fossils at Samphire Hoe can be found on the foreshore. Sometimes, fossils in chalk blocks will require a hammer and/or chisels.