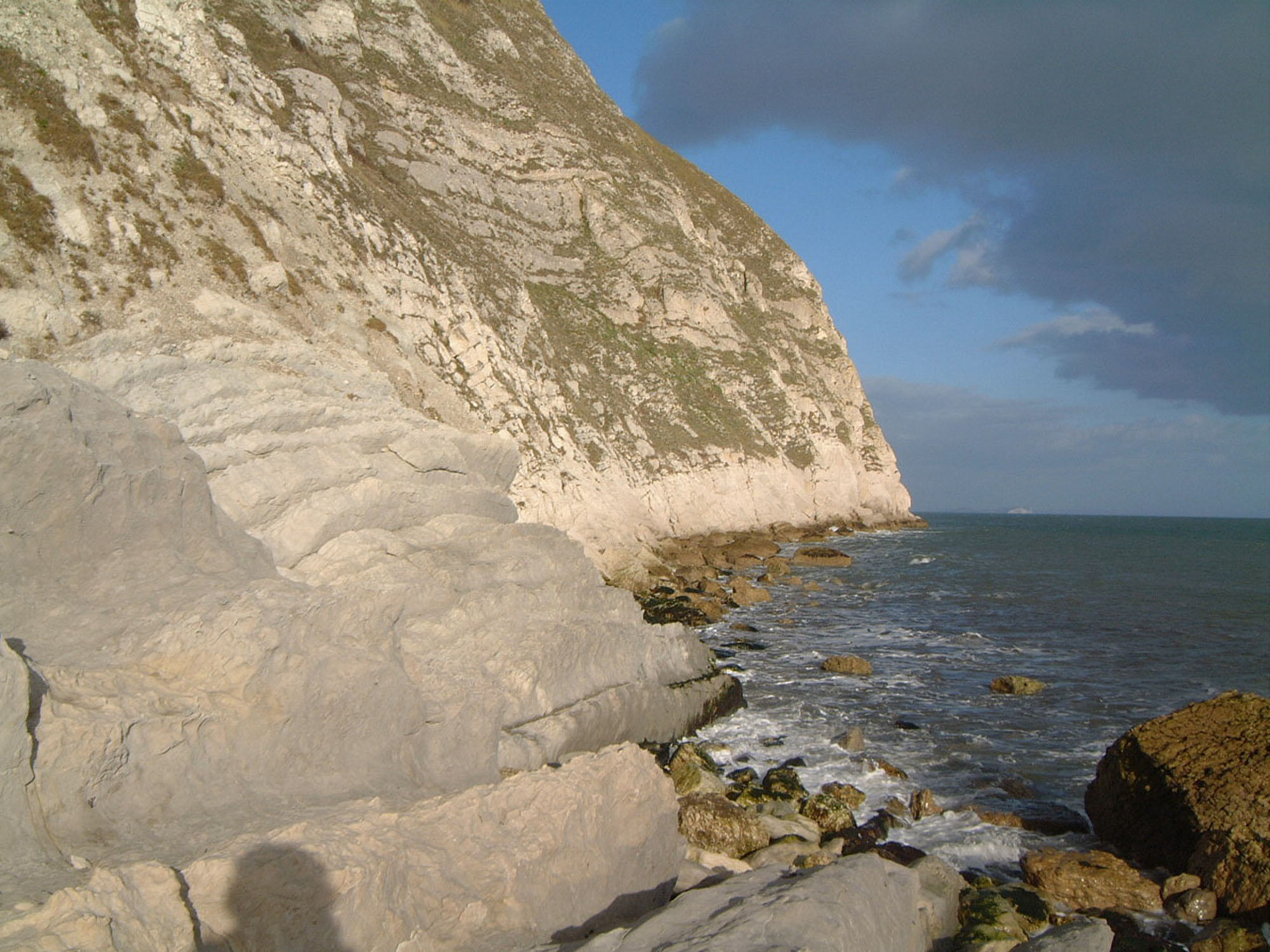 This Cretaceous site represents an alternative to the many Jurassic sites of Dorset. It yields fossils from the chalk, including echinoids, bivalves, brachiopods and ammonites. However, fossils here are, less common than other chalk locations in Dorset.

♦ To access the beach at Swanage, follow the signs to New Swanage. Along the route, you will see a sign pointing to the beach.
♦ Follow this road and you will see a large car park. Park here and then walk east until you reach the promenade, where you can descend to the beach just before the high cliffs.
♦ Once on the foreshore, follow the cliffs north.
♦ Being not far from the town of Swanage, there is plenty to do and see. Toilets and food shops are all close by.
♦ Ref: 50.62238°N, 1.95353°W

FIND FREQUENCY: ♦♦♦ – Swanage can yield a lot of fossils in one day. However, normally, you have to work hard for your finds, using a hammer, chisel and safety goggles.
CHILDREN: ♦♦♦ – Swanage is suitable for older children, but they must keep away from the base of the cliff. Also check tide times. The beach can be quite rocky and, at high tide, the sea often reaches the base of the cliff.
ACCESS: ♦♦♦♦ – Access to Swanage is excellent, and a car park is very close by, with only a short walk to the fossils.
TYPE: – The vast majority of the fossils are found within chalk boulders on the foreshore and, therefore, you will need a hammer, chisel and safety goggles to extract them.

Swanage is part of the Jurassic World Heritage Coastline,  so please follow the Fossil Code of Conduct. This is also a SSSI, so no hammering of the cliff or bedrock is allowed. Damage has already been caused to the heritage site by people using power tools. This is strictly against SSSI rules and any attempt to ignore them will result in prosecution.

From the Wealden Group, which is at the southern end of New Swanage, you can find ostracods (Cypridea) and snails (Viviparus). These, together with oysters, are the most common fossil here. However, the Wealden Group is not that productive for fossils.

From the Lower Greensand, bivalves, gastropods (Cassiope) and ammonites (Deshayesites) can all be found. Fossils from the Upper Greensand include many different species of ammonites (Anahoplites, Prohysteroceras and Mortoniceras), oysters and echinoids.

Look out for a hard, blue-grey stone band when you pass the Gault Clay. This bed is the most productive for fossils.

Ballard Cliff and Ballard Point, above the Wealden cliffs at the northern end of New Swanage offer fossils from the Grey Chalk Subgroup and lower beds of the White Chalk Subgroup. The Cenomanian basement bed, which is just above the Upper Greensand yields ammonites (Schloenbachia and Sciponoceras). Starfish, brachiopods, bivalves and echinoids are also common.

Most fossils can be found by looking in the boulders. The Greensand and Chalk boulders certainly give you a better chance of finding fossils but you will need a good hammer, a chisel and safety goggles to extract them. Other fossils can be found in the slippages or exposed on the foreshore after scouring conditions.

Fossils from the Wealden Group can sometimes be washed out of the cliff after rains and end up on the scree slopes. This often represents the best chance of finding fossils from these beds.

Swanage Bay, from Peveril Point in the south to Ballard Point in the north is entirely over an outcrop of Cretaceous aged rocks. Swanage town lies on the outcrops of the lower part of the Wealden Group but is now mostly hidden by sea walls and buildings. However, the bay shows a section through the upper part of the Wealden Group and above this, Lower Greensand, Gault and Upper Greensand Formations are found.

Further north, you come to the Lower Greensand. This is very similar  to that on the Isle of Wight. However, exposures are poor due to a lack of recent cliff falls, but some remain. There is 61m of Lower Greensand here covering the following beds: After this, you come to the Gault Clay, but this is frequently slipped or hidden by rock falls. Further north, the Upper Greensand marks the start of the more fossiliferous beds. Here, a hard blue-grey stone band, about 8.5m from the top, is full of ammonites.

Finally, blocks of Glauconitic Marl and the Cenomanian basement bed from the Grey Chalk Subgroup, exposed in the cliffs above on the beach mark the northern end of this excursion, with the Plenus Marls being the most exposed part of the Chalk. This is the base of the Holywell Nodular Chalk but inspection beyond this point is not advised. Fallen material from the lower parts of the White Chalk Subgroup (Lewes Nodular Chalk) can also be found as fallen blocks.

Common sense when collecting at all locations should be taken and knowledge of tide times should always be noted. The main issue one should be aware of is the tide. It is easy to become cut off so it is important to return at least 3 hours before high tide. The other danger is falling debris. Rocks frequently fall due to weather and birds. Hard hats are recommended.

A hammer, chisel and safety goggles are the most important tools at Swanage. Be sure also to bring some paper to wrap your finds in. A pick for the softer Gault Clay and Wealden Shales are also recommended. We recommend good walking boots, as the foreshore can be rocky.

This site is an SSSI and forms part of the UNESCO World Heritage Jurassic Coast. This means you can visit the site, but hammering the bedrock is not permitted. For full information about the reasons for the status of the site and restrictions please download the PDF from Natural England – SSSI Information – Swanage