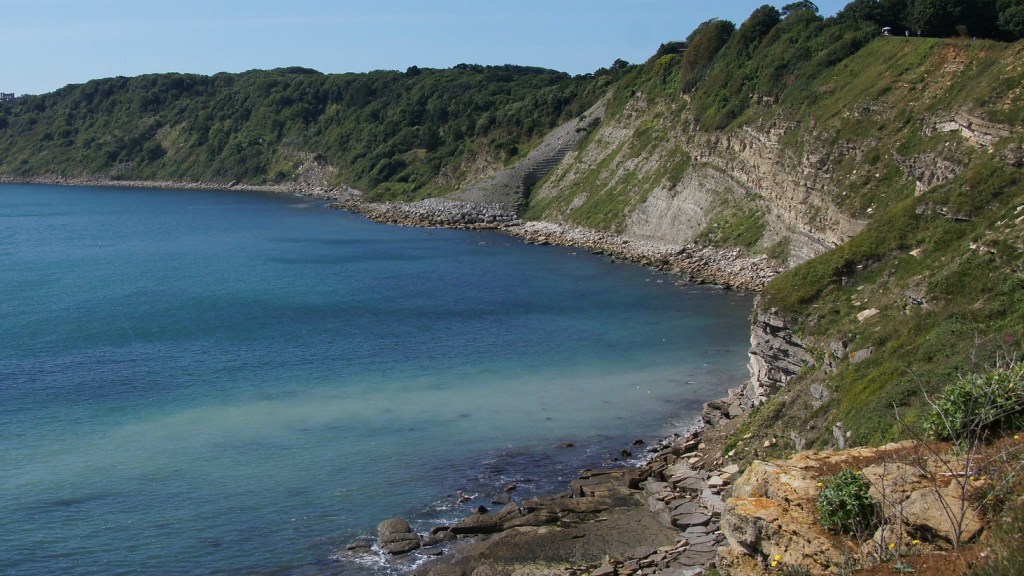 T he two kilometre stretch of coastal sea cliffs between Peveril Point and Durlston Head near Swanage displays the finest sections of the Purbeck Limestone Group in Britain. Here, in a challenging and hazardous terrain,  tiny mammal remains, turtle shell and bone fragments, crocodile bone and skin fragments, fish remains and dinosaur footprints can be found. Durlston Bay is also a good location for micro fossils. Durlston Bay is a fascinating place, although better suited for the geologist or experienced fossil collector.

♦ Take the A351 to Swanage. Stay on this road until you get to the seafront. Then, turn right into Shore Road and then into Institute Road. From this road, turn into Seymer Road and finally turn into Durlston Road. You will need to park down Belle Vue Road at BH19 2HP.
♦ Park in this road and take the footpath that is signposted as the ‘Zig-Zag’ path. This goes between the flats.
♦ The Zig-Zag path will take you to the shore, where you can immediately start looking for fossils.
♦ Ref: 50.60475°N, 1.95079°W

FIND FREQUENCY: ♦♦♦♦ – Durlston does yield many fossils, but most of these are very small and are for the fossil enthusiast, rather than a beginner.
CHILDREN: ♦ – This location can have unpredictable tide conditions. Double tides frequently occur and the sea can be very powerful. The foreshore is also extremely rocky and access to the beach is difficult. Therefore, this location is certainly not suitable for families with children.
ACCESS: ♦♦♦ – Access to this location is fairly easy, if you use the Zig-Zag path. This has now been re-opened after being closed as a result of a landslide.
TYPE: – Most fossils can be found along the foreshore, especially after storms but they are also commonly found in the cliff. Rock falls, from the highly unstable cliffs, are common and provide fresh material on a regular basis.The Mammal Bed, is at the base of the cliff, so take home samples for analysing later.

This site is part of the Jurassic World Heritage Coastline, so please follow the Fossil Code of Conduct. This is also a SSSI, so no hammering of the cliff or bedrock is allowed. Damage has already been caused to the heritage site by people using power tools. This is strictly against SSSI rules and any attempt to ignore them may result in prosecution.

Durlston Bay is one of the most important Early Cretaceous fossil sites, known for the remains of turtles, early lizards, dinosaurs, crocodiles, pterosaurs, early mammals and insects that lived in the swampy, lagoonal ecosystem that existed 140–145 mya.

Durlston Bay represents a transition between the Jurassic and the Cretaceous periods. During this time a large lagoon stretched along the coast and as a result, the most commonly found fossils are teeth belonging to fish and crocodiles (although the latter are significantly less abundant), bivalves, fragments of turtle carapace and bone, crocodile scutes and isolated fish bones.

Within the dark banded freshwater Mammal Bed, fragments of bone are common, which are compacted within the soft black and grey layers. Fragments of crocodile, fish and turtle are very common, with other mammals also being found here. However, the bones are extremely fragile, so it is best to leave them within the shale and then extract and preserve them when home. An ideal way to collect here is to take several bags of samples home and wet sieve. Small teeth can also be found using this method, but make sure you sieve at 0.5mm, since many of the teeth will fall through anything wider than this mesh.

At the west side of Durlston Bay, the hard limestone rocks yield crocodile, turtle, mammal, fish and reptile remains and the occasional crustacean. Although less common than in the shales of the Freshwater Marly Bed, fossils in the limestone are much better preserved. They also tend to be less fragmented.

The beds are rich in microfossils, including some very rare small mammals, and also forams and ostracods. You can take back samples for sieving at home, but you will need a microscope and sieve with a 500 micron mesh.

Mammal remains can be found within the harder limestone, but these are rare. It is much easier to search through the shale. The Mammal Bed can easily be recognised by the colour and the number of freshwater shells in it. Note that the beds suddenly dip in the middle of Durlston Bay and run for a while along the foreshore. This is the point at which the Mammal Bed reaches the level of the beach.

To the west of Durlston Bay, mammal remains are more common within the hard limestone rocks on the foreshore. Sharks and fish remains can also be found, along with crustaceans and reptiles.

The coastal sea cliffs between Peveril Point and Durlston Head near Swanage, Dorset, displays the finest sections of the Purbeck Limestone Group in Britain and comprise the type locality for the Formation. The strata of the Purbeck Limestone Formation here are famous for their exceptionally diverse fauna, which includes mammal remains unique to the early Cretaceous of Britain and important reptilian material.

Durlston Bay represents a transition between the Jurassic and the Cretaceous periods. During this time, a large lagoon stretched along the coast; on the land were large numbers of dinosaurs and mammals, and in the shallow waters were crocodiles, sharks, fish and turtles. Both freshwater and marine forms of fish occur as fossils here, including abundant holostean material and teleost fishes. Durlston Bay is the type and only locality for two species of early teleost, Thrissops molossus and Pachythrissops laevis. It is also the type location for the coelacanth Holophagus purbeckensis.

The Purbeck Limestone Group has been split into two formal lithostratigraphical formations, the Durlston Formation above, and the lower, Lulworth Formation.

Common sense when collecting at all locations should be used and prior knowledge of tide times is essential. There are four tides a day here. Care should be especially taken at the two headlands. The sea nearly always reaches the cliffs and the rocks can be very slippery. Care should also be taken of falling rocks, as the cliffs are extremely unstable. Landslips are always possible here and the ground beneath your feet, if climbing the slopes, could give way at any time.

The section towards Durlston Head is an area of complex faulting but access is difficult and quite dangerous and the cliffs are much overgrown. Access is only safe if taking a route along the foreshore from the Zig Zag path but this necessitates an arduous journey over large boulders and rocks for about half a kilometre.

There are two different rock types that fossils can be collected from – the dark shale and hard limestone. For that reason, it is best to take a range of tools, including hammers and, most essentially, a field lens. It is also worth taking some preserving liquid for fragile fossils.