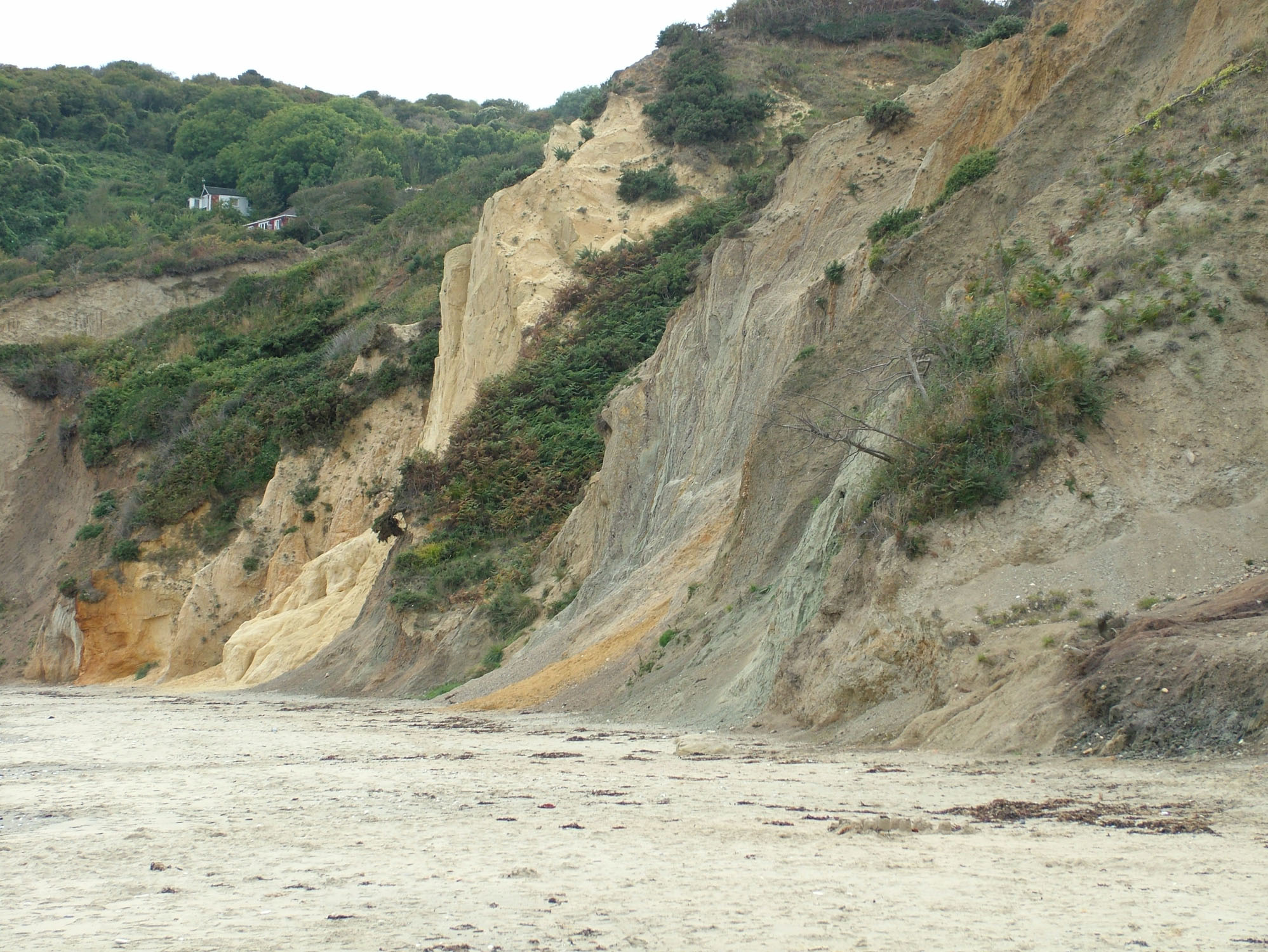 FIND FREQUENCY: ♦♦♦♦♦ – Although lots of fossils can be found, you will often need the right conditions. They can mostly be found during scouring conditions on the foreshore, but fossils can also be found from the Upper Chalk in the landslips.
CHILDREN: ♦♦♦♦ – Whitecliff is ideal for families and suitable for children. The parking nearby has toilets and a cafe, and there is a nice clear, sandy beach, which makes for an ideal day out.
ACCESS: ♦♦♦♦ – Access to Whitecliff is excellent, with parking near to the location.
TYPE: – Most of the fossils are found on the foreshore. You just pick them up, but they can also be found in the cliff.

Starting from the west end of the bay, the Upper Chalk of Culver Cliff yields excellent sponges, such as Porosphaera. Echinoids, such as the small Echinocorys subconicula and belemnites (Belemnitella mucronata) can be seen from the Portsdown Member. This is at the top of the succession, so it is best to search the rocks that have fallen from this thin bed of marl. Occasional fish remains can also be found.

Past the chalk, the Reading Formation can be seen, although much of it has been slipped and is covered by vegetation. This bed is mostly unfossiliferous, although a few silicified echinoids and a few derived microfossils from the chalk have been found. The London Clay and London Clay Basement Bed, immediately after the Reading Formation, are where most of the more interesting fossils can be found. Sharks’ teeth, worm tubes (Ditrupa) and a range of shells can be found. The London Clay Formation includes the Bagshot Sands which are unfossiliferous. Most of the fossils can be found from the first part of the sequence. Many various molluscs can be found from the Bracklesham Group, which include Turritella (a gastropod) and Venericor planicosta (a bivalve). These are from the Earnley Sand. It is also possible to find the large foraminifera, Nummulites laevigatus.

The Barton Group is mostly covered up by a sea defence, although, during scouring conditions this is exposed on the foreshore. Here, the shells of the large foraminifera, Nummulites prestwichianus and Nummulites rectus, can be found. The Becton Sand follows this (again mostly covered up by defences). The Headon Hill Formation, which has been badly landslipped, can yield a wide range of marine shells, including gastropods (Viviparus, Galba, Planorbina, Melanopsis, Theodoxus) and bivalves (Potamomya, Ostrea, Psammotaea and Corbula), as well as many other species. And, at the eastern end of the bay, the Bembridge Limestone yields superb specimens of Planorbina and Galba.

Most of the fossils from the London Clay can be found on the foreshore, mostly during scouring conditions when the clay is exposed. The London Clay Building Stone layer can be also seen above, with occasional fossils. During scouring conditions, superb shells from the Bracklesham and Barton Groups can also be seen exposed on the foreshore. You should also search the boulders along the foreshore at the chalk end and in the landslips. Often, if you split these boulders, fossils can also be found inside. The Bracklesham and Barton Beds exposed in the cliff face contain shell beds, from which you can collect, although the shells are very fragile and require great care. At the east end of the bay, the Bembridge Marls and Bembridge Limestone are exposed, and fossils can also be found in these, where there are layers of shells.

The northward dipping Chalk at Culver Cliff is replaced by a good Tertiary exposure at Whitecliff Bay. These Palaeogene cliffs of soft sands and clays provide one of the most important sections of Europe. Locally, they form a key, reference section for the younger strata of the Hampshire Basin. Most of the beds are vertical or steeply dipping and thus a large stratigraphical sequence is seen in a short geographical distance. In little more than a kilometre of coastline, about 500m of late Palaeocene to late Eocene clays and sands are well-exposed.

Common sense when collecting at all locations should be used and knowledge of tide times is essential. The coastline is dangerous during high spring tides and the cliffs are constantly falling.

Most of the fossils can be picked up off the foreshore, without the need of any tools. However, it is best to take a few, which may come in useful. In particular, a hammer, safety glasses and chisels may be required for the Upper Chalk at Culver Cliff.