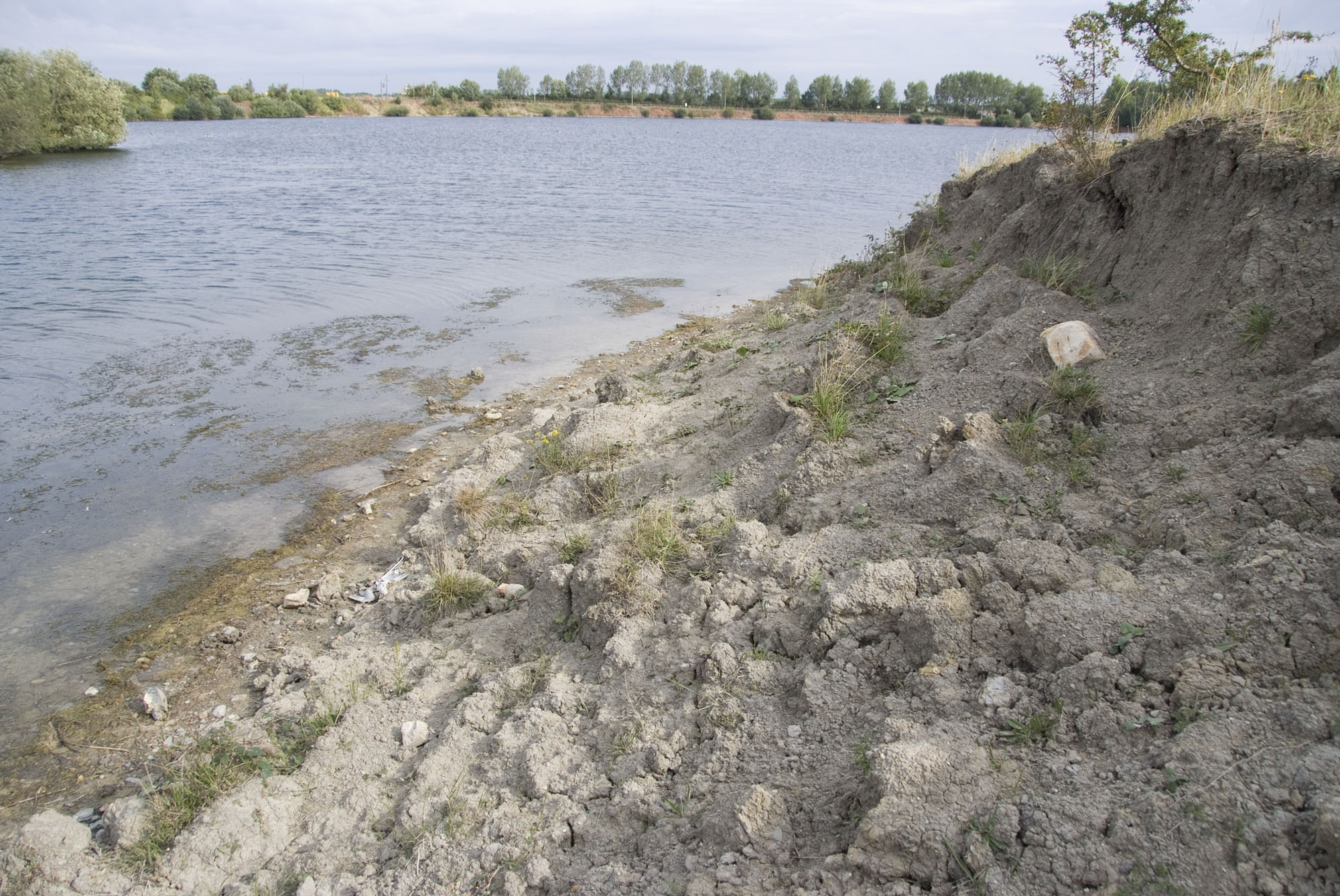 Most of the old clay pits have been swallowed up by the building of huge housing estates to the south of Peterborough. However, one area at Yaxley has been left as a nature area, with public byways taking you around the rim of the pits, which are now filled with water. On the banks, the Oxford Clay is rich in fossils.

♦ From the A1139 Peterborough bypass, take the A1260 towards Yaxley.
♦ After passing Hempton Hargate, you will come to a junction, where you need to turn off to Hempton Villa, which is the second (and new) housing estate along this road.
♦ Park along the road at the entrance to this estate and then walk south back to the main junction, towards Yaxley.
♦ You will then see a public byway. Follow this around the lake and the low cliffs of Oxford Clay can be found on its south-eastern banks. There are wide access points to the banks from the byway, on the right hand side.

FIND FREQUENCY: ♦♦♦♦♦ – The Oxford Clay here is extremely rich in fossils. You are almost certainly going to come home with some finds. This location is even better during the summer, when the water levels drop, or after a long period of heavy rain, when fossils are washed out of the clays.
CHILDREN: ♦♦ – This location is not suitable for children, because the water is extremely deep, and because fossils are found along the embankment, next to the water.
ACCESS: ♦♦♦ – This area of Peterborough is under massive development. Most of the clay pits to the north of Yaxley, on the southern edge of Peterborough, are now underneath extensive housing estates. In addition, the area can be busy and hard to find, but, with the aid of a map, you should not have any problems.
TYPE: – Fossils are found along the banks of the lakes within the old quarry. These lakes now cut into the banks of Oxford Clay and, in one area in particular, there are excellent exposures of fresh Oxford Clay, which is constantly being eroded. Although there are no restrictions on collecting, this area is rich in wildlife. Therefore, take care and try not to walk on any plants, as you cross the land to get to the embankment.

The southeast embankment at Yaxley is constantly being eroded and the Oxford Clay here is extremely rich in fossils. The most common find is the oyster Gryphaea dilobotes. Belemnites are also plentiful, including the most common large Hibolithes hastatus. You are also likely to find worm tubes, crinoids and ammonites, especially the common kosmosceras.

Reptile remains are surprisingly quite common here, with ichthyosaur and pliosaurs being the most commonly found. Crocodile remains (Steneosauraus) and sharks’ teeth also turn up from time to time.

The best area to search is at the base of the embankment, where the water has ‘sieved’ the clay and has left a find layer of shingle. Fossils are also found at the bottom of the slopes of the banks. In addition, you can take samples back home for wet sieving to search for small teeth.

This location is best visited when the water-levels are low. During the summer, a dry season will be far more productive than a wet season. And, during times of drought, this location can be extremely productive when the water levels drop even lower. After heavy rain, this site is also productive, because the rain washes the fossils down from the embankment.

The lakes around the village of Yaxley are the result of the extensive brick working and clay quarrying that took place in the area. Much of this industry is now conﬁned to a few productive pits and in the case of Hampton Vale, the land now comprises a new housing estate, with the beneﬁt of a large country park, in which Hampton Vale Lake is set. On the southeastern banks of the lake, the Lower Oxford Clay of the Peterborough Member Formation (Callovian age of 159-­‐165 Ma) is exposed.

It is the Oxford Clay that makes an excellent material for bricks. This clay also happens to be extremely rich in fossils. It has been reclassified and now falls within the Peterborough Formation. It is mainly brownish-grey, fissile, organic-rich (bituminous) mudstones, with a shelly fauna dominated by crushed aragonitic ammonites and bivalves. There are subordinate beds of pale-medium grey, blocky mudstone, with several bands of cement stone nodules/concretions. The basal beds are commonly silty, with shell beds rich in the bivalve, Gryphaea dilobotes.

Common sense when collecting at all locations should be used. The water at Yaxley pits is extremely deep, so ensure you keep well away from the banks and do not enter the water, even if it looks shallow. The area can also be very muddy after rain, so take care not to get stuck.

A pick and knife are very handy when looking in the clay, although all you really need is a good eye. Fossils are mostly found either scattered on the surface or poking out of the embankments and dykes. Fossils from Yaxley can be fragile, so should be placed in small containers, the most fragile of which (such as shells) should be wrapped up in tissue.

When you return home,  ammonites need to be cleaned and are best preserved by a coating of varnish (water soluble artist’s varnish is ideal) and kept in a drawer or container with a sachet of silica gel, to help prevent further pyrite decay. Pyrite decay is not easily prevented. Specimens that consist almost wholly of pyrite are easily identified as such, as they look and feel ‘metallic’. The oxidation of the pyrite (FeS2) causes the problem and fossils, over time, may disintegrate.

This site is an SSSI. This means you can visit the site, but hammering the bedrock is not permitted. For full information about the reasons for the status of the site and restrictions please download the PDF from Natural England – SSSI Information – Yaxley