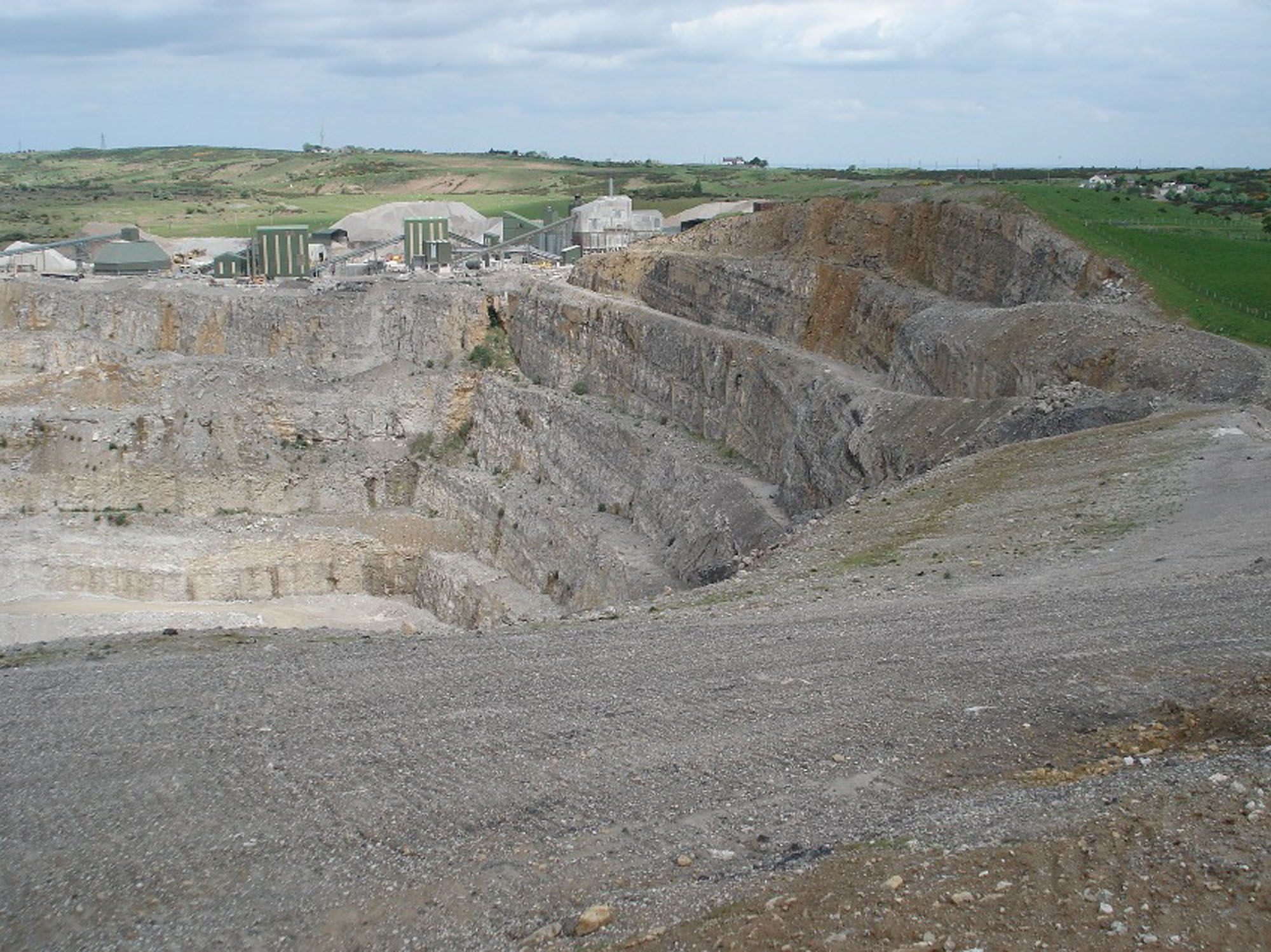 Surrounding the massive working limestone quarry just outside Halkyn are many smaller disused workings and old piles of waste material. In places, good quality brachiopods, corals and crinoidal limestone can be found.

♦ The fossil hunting area can be found approximately one kilometre to the southeast of Halkyn. Parking is close to the top of the road leading into the modern quarry on its eastern side.
♦ In addition, many public footpaths cross this land, making access easy.
♦ Ref: 53.22757, 3.19168

FIND FREQUENCY: ♦♦♦ – In places, many good brachiopods, corals and pieces of crinoidal limestone can be found. However, in other areas, the old quarry waste is virtually barren of specimens.
CHILDREN: ♦♦♦ -The terrain here is flat in places, but pock-marked in others by pits, old quarry faces and infilled shafts. Children should be fully supervised to ensure their safety.
ACCESS: ♦♦♦ – Many footpaths cover the area surrounding the modern quarry. The ground is also covered by vegetated piles of scree and is heavily pitted in places, but any reasonably fit person should be able to fossil hunt here.
TYPE: – Fossils can be found among the piles of old quarry waste and also beneath the faces of old quarries.

Much of the land surrounding the current quarry is covered by waste piles of limestone and chert, which, although largely obscured now by soil and grass, do yield occasional fossils. In other areas, old quarry faces can still be seen and fossils can be observed in situ or collected from scree. Fossils can be picked up from virtually any waste pile in the area surrounding the modern quarry. However, these finds tend to be infrequent, small and weathered. Pieces of chert with moulds of fossils that have since dissolved away can also be found among some piles principally composed of chert, while crinoid stem pieces, brachiopods and small corals may occasionally be found in waste piles of limestone.

To find fossils in the area surrounding the modern quarry, some exploring must be carried out. In places, hardly anything will be collected, but elsewhere fossils are abundant. The current, working quarry is also an impressive feature, worth taking a look at from the field boundaries (but do not enter).

Large crinoid stem sections and huge brachiopods can be seen weathering out of sizeable blocks of rock placed outside the quarry, next to the car park. The best places to look for fossils are within the faces of the old quarries that litter the area. Some rock layers are virtually devoid of specimens, while others are crammed with brachiopods and pieces of crinoids. Many specimens can be found below productive quarry faces.

One old quarry that is especially fruitful may be found next to the road north of the modern quarry, just next to a bridge. You will need to drive here from your original parking area.

Buildings and walls in the surrounding area also often have fossiliferous limestone blocks incorporated into their structures. These present impressive coral, crinoid and brachiopod specimens, which have weathered partially free from their matrix over time. However, do not collect these.

The Carboniferous Limestone at Halkyn is Visean (Chadian – Yeadonian Substage) in age. It is part of the Craven Group, which is about 330myrs old. The Craven Group overlies the Clwyd Limestone Group, which is extensively found throughout North Wales.
Mudstone and limestone rock and other lithologies including the Bowland Shale Formation, sandstones, siltstones and chert occur within the group.

The relief of the area makes it easy to damage ankles. In addition, in some places, old quarries have been cut into the ground and it is hard to see them until you actually reach them. Keep an eye out for such features and do not enter the modern quarry.

A map, a number of bags and newspaper in which to wrap your finds is all that is really needed at this location. A hammer and safety glasses may come in handy for breaking up larger blocks of fossiliferous limestone at the base of old quarry faces.