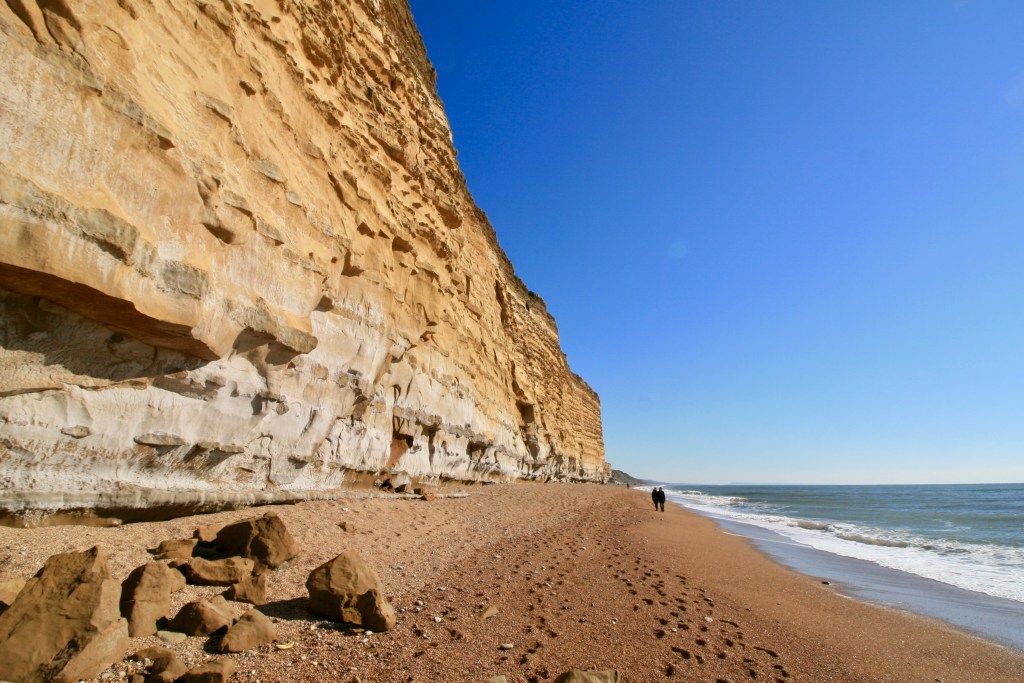 Locals can wait months, or even years, for Burton Cliff to ‘fall’ and when she does, her rich ammonite beds from the top layers of Inferior Oolite can yield superb fossil finds. If you’re lucky enough to be nearby, there’ll be plenty to bring home. Cliff falls do occur, albeit every few years or so and fossils can then be collected from the rocks on the foreshore. It’s the Inferior Oolite that contains the rich harvest, which invariably is waiting for the locals!  As well as ammonites, some exquisitely preserved in calcite, many other fossils can be found, including echinoids, shark fins, bivalves and brachiopods.

♦ From Burton Bradstock village, access from the eastern end at Hive Beach, parking at the National Trust car park (Postcode: DT6 4RF) . Hive Beach café provides food, drinks and toilet facilities. Alternatively on foot from the village, turn west at the Dove Inn, following the footpath, keeping east of the River Bride to the sea.
♦ From here, we recommend either walking along the top of the cliffs and then dropping down the opposite side, or from Hive Beach, walking westwards along the beach at low tide, as this is where the fossils are found. Few fossils are found at the eastern end of Burton Cliff, as there is no Inferior Oolite present and rocks are predominately Bridport Sand Formation.
♦ Ref: 50.69608°N, 2.72253°W

FIND FREQUENCY: ♦♦ to ♦♦♦♦♦ – If you are prepared to take a heavy lump hammer and split fallen blocks and if you are lucky enough to arrive shortly after a fresh fall, there is plenty to be found. Finds include superb ammonites, belemnites, shells and echinoids. Without fresh falls though, finds can be limited.
CHILDREN: ♦♦ – Burton Bradstock is not suitable for families, as Burton Cliff can be very dangerous and people have been killed here by sudden, dramatic cliff falls.
ACCESS: ♦♦♦♦ – Access to the beach at Burton Bradstock is easy, with a National Trust car park nearby. However, you will probably  have to walk towards the western end of Burton Cliff, which can be very difficult on return, if you have a bag crammed full of fossils!
TYPE: –  This is a foreshore and cliff location, so fossils can be found in both. However, fossils need to be worked for by breaking any blocks of fallen Inferior Oolite found on the foreshore. Do not hammer into the cliffs, as they can be very unstable and this is also an SSSI site.

The tall, highly unstable cliffs are very unpredictable and can collapse at anytime. Nonetheless, falls are vital for discovering blocks from which fossils can be found. Major cliff falls are rare but more frequent minor falls still reveal fossil specimens but the danger is still very real. Wearing a hard hat is advised, although keeping well away from the base of the cliff is essential. If you find a block with fossils in it, do the hammering away from the cliff. You won’t find much in the Bridport Sand Formation, which forms the bulk of Burton Cliff, although some ammonites and belemnites are present in it. However, the top few metres of Burton Cliff comprises the fossil-rich layer of Inferior OolIte and fossils found in the oolitic blocks are plentiful, providing a fall has occurred. Being at the top section of Burton Cliff, the Inferior Oolite  layer is totally inaccessible and finds are totally reliant on cliff falls. 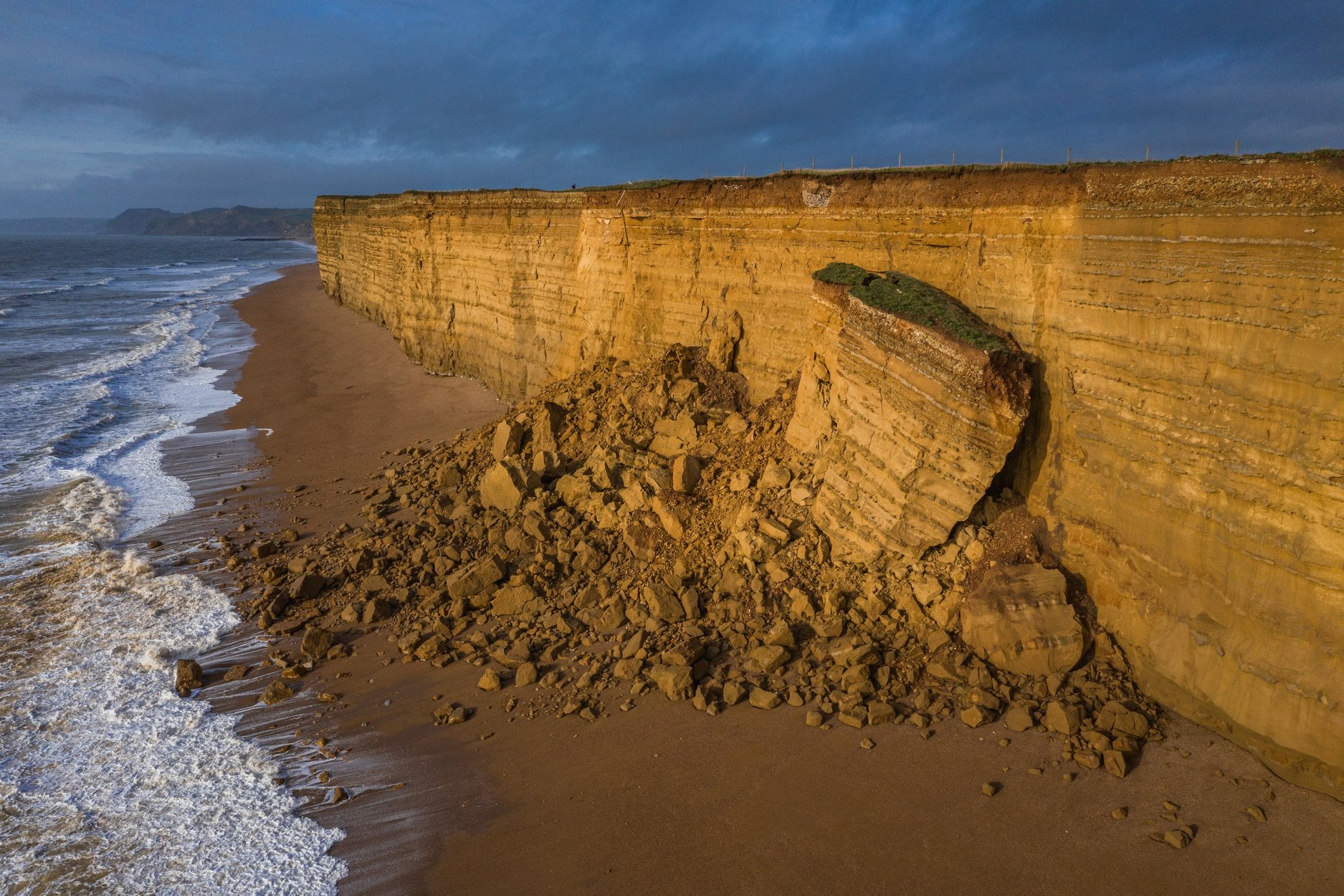 Burton Bradstock is rich in ammonites and there are many different species to be found, nearly all from the Inferior Oolite. The rock is mostly Bajocian age, with early Bathonian in the uppermost part of Burton Cliff.  Ammonites from the Inferior Oolite found here include Parkinsonia parkinsoni, Parkinsonia rarecostata, Emiliea sauzei, Strigoceras truellei, Dorsetensia romani,  and Garantiana garantiana,  In the underlying Bridport Sands Formation, common ammonites are Leioceras opalinum, Tmetoceras scissum, and Graphoceras concavum. Various gastropods and bivalves occur with some frequency. Bones are generally very rare.

After a significant cliff fall, which are not commonplace, blocks of Inferior Oolite limestone may come down from the uppermost layer of Burton Cliff to beach level, in which it is possible to find not just ammonites but also sponges, echinoids (Clypeus), brachiopods and bivalves. The Inferior Oolite is a highly condensed bed of rock, formed in conditions not dissimilar to the Bahamas today.

Burton Bradstock is one of those locations where you have to be in the right place, at the right time. Cliff falls are rare and a fall from the Inferior Oolite is even rarer. However, although most of the prize finds are usually snapped up quickly, a decent sized cliff fall can provide weeks and even months of decent collecting for smaller specimens or, with some hard work, even larger ones. Further west, a break in Burton Cliff at Freshwater can provide a slightly safer spot, where Inferior Oolite occurs, without the ever-present dangers of being under Burton Cliff.

Without a fresh fall, walk westwards along the beach looking out for lumps of very hard limestone from past cliff falls. Note that any fall of just sandy rock is probably not going to produce anything worthwhile, as it will be from the mostly unfossiliferous Bridport Sand Formation, which makes up the majority of the cliff. Similarly, there is no Inferior Oolite on the cliff top section at the eastern end. Where ammonites are seen protruding, these can usually be extracted using a heavy lump hammer, although some hard work splitting the rock is necessary to yield finds, some of which can be superb. Preparation using an air pen, back at home, will usually be necessary.

With a little patience and by splitting rocks, you are almost certain to find at least some good fossils. If the rock you are working on appears unproductive, try another. The ammonites are in zones, so once you find a fossiliferous rock, it’s likely to be full of other fossils.

Burton Cliff is similar to East Cliff at West Bay (see separate section on this website). It is composed mostly of Bridport Sand Formation. Most of this is Toarcian (Lower Jurassic) but the top 2 metres are Aalenian (Middle Jurassic).

As at East Cliff (West Bay), the vertical and straight Bridport Sands Formation, displays beds of friable sandstone and hard carbonate cemented sandstone. Here, exposures at the base are fossiliferous in places. The Bridport Sand Formation  show evidence of trace fossils, particularly Thalassinoides and U-shaped worm burrows, indicating very shallow water conditions at the time of deposition. Other fossils are present in the Bridport Sand but they are certainly not abundant and ammonites are hard to find.

The overlying Inferior Oolite is not safely accessible in Burton Cliff but large, fallen blocks are sometimes present on the foreshore, where they have collapsed from the cliff top above. In these, almost the full thickness of the unit can be studied. Ammonites are numerous in the condensed sequence of the Inferior Oolite at Burton Bradstock. They are not usually easy to find, though because of limited amounts of the limestone at beach level and because local  collectors have already taken specimens!  They are certainly not as well-preserved as the ammonites of the Liassic clays.

Burton Cliff is being undercut, as waves more frequently abrade the foot of the cliff, due to the diminishing width of the beach shingle below.  As a result, rock falls are becoming more commonplace and fatalities have occurred here.

Common sense when collecting at all locations should be used and prior knowledge of tide times is essential. Care should be taken of the tides at all locations. The well-known exposures of fossiliferous limestone at the foot of the cliffs are of course the result of cliff falls and people have been tragically killed in the past at this site. While major falls are not common, special care must be taken to watch for areas from where loose material may fall. Wet or frosty weather conditions can cause cliff falls. At all times, you should wear safety helmets and watch out for any dangerous activity on the cliff face. Since this is at the western part of Chesil Beach, there is some risk of being cut off by the tide or swept into the sea in very stormy weather conditions.

Burton Bradstock is a location where you have to work hard for your finds, so take a good, strong heavy hammer and safety goggles to crack open the oolitic rocks. Remember to take plenty of paper to wrap any specimens.