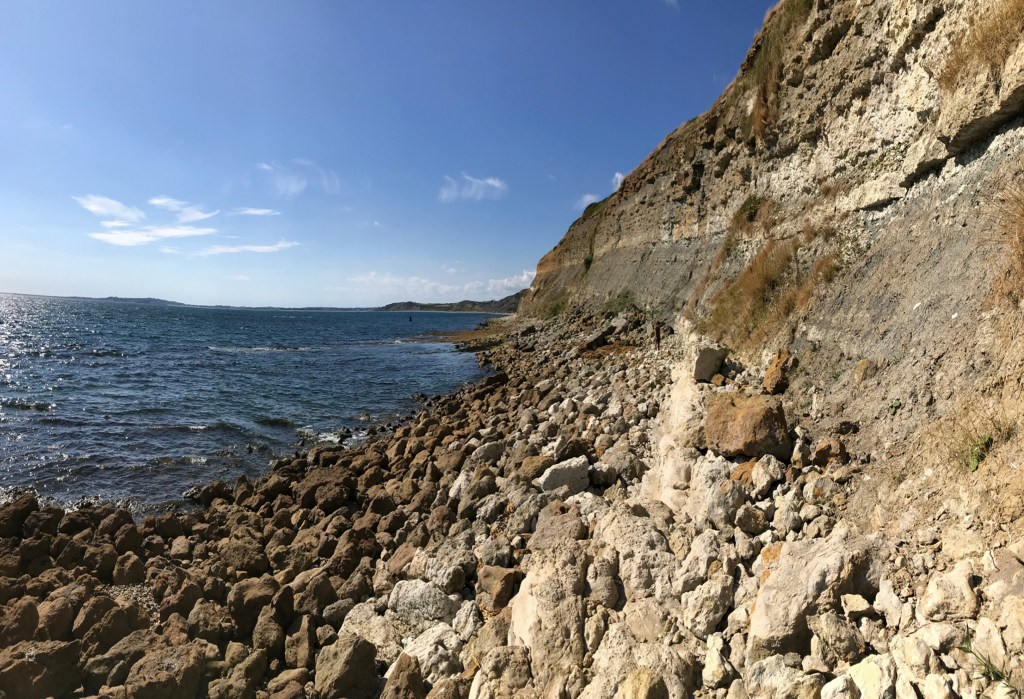 The section of coast, east of Ringstead Bay, between Bran Point and Osmington Mills, is a small part of the 154km-long UNESCO World Heritage Site of the Jurassic Coast. The dramatic cliffs here expose a superb succession of Corallian (Middle Jurassic) rocks, which reveal the entire sequence of the Osmington Oolite Formation and other beds, which are rich in fossils. The site, along with the rest of the Jurassic Coast, has Site of Special Scientific Interest (SSSI) status, so no hammering into the cliffs is allowed. However, fossils are found in broken rocks from rockfalls and along the rocky foreshore, which may be collected. 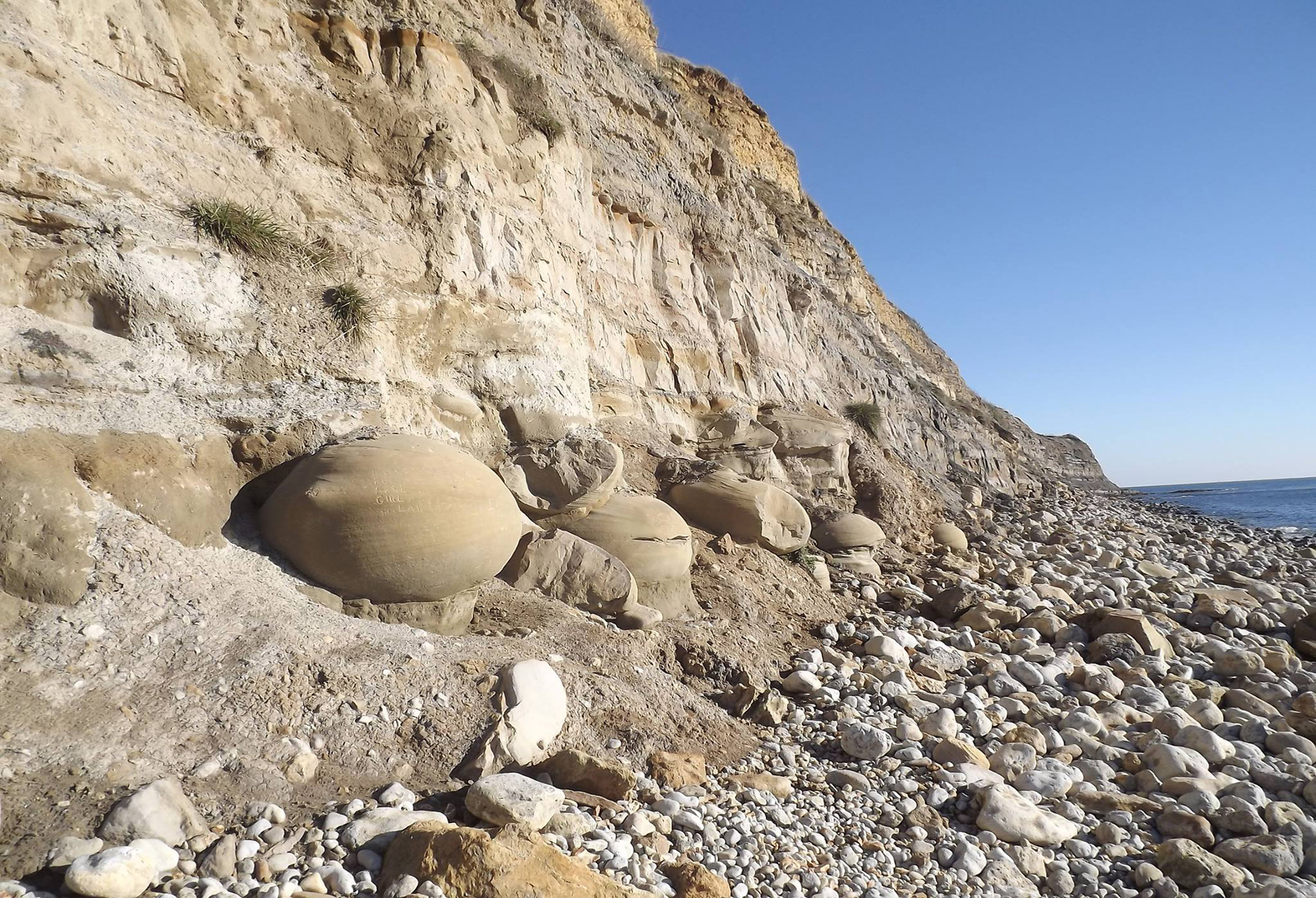 Preston Grit can be seen, the latter forming the small waterfall.

♦ Osmington Mills can be accessed from two points: (1) The road to Osmington Mills is just off the A353 and this lane leads to the car park for the Smuggler’s Inn. It can be busy in the summer months and is a popular tourist destination. There is a pay-and-display car park here. From here, walk down the steps to the pub and then pick up the southwest coastal footpath, which runs behind the inn. Descend to beach level and head east.
♦ (2) Alternatively, park at the large car park at Ringstead Bay, again off the A353, and walk down the narrow lane to the coast. A parking charge for the day applies here between March and October. Walk towards the coast and then westwards to the visible headland of Bran Point.
♦ Access from Ringstead Bay is the easiest route for children. This walk, along shingle and sand, can still be hard going but is certainly easier than the route from Osmington Mills, which is immediately very rocky.

FIND FREQUENCY: ♦♦♦ – Fossils at Osmington Mills can frequently be found but you will need to work hard to find them. Occasionally, you can find ammonites washed out along the foreshore.
CHILDREN: ♦♦ -Walking along this section is not easy going, especially for anyone with walking difficulties and very young children. However, Osmington Mills provides a pleasant alternative to the crowded beaches of Charmouth and Lyme Regis in the summer holiday season. This location is seldom crowded, save for the very busy car park at Ringstead Bay and the Smuggler’s Inn at Osmington Mills. A return to the Smuggler’s Inn car park can be rewarded by stunning views towards Weymouth and the ledges at Black Head, packed with Myophorella.
ACCESS: ♦♦♦ -This is an easy location to initially access, although it can become hard going over the rocky foreshore and along the section by the cliffs.
TYPE: – Fossils are found amongst the fallen blocks and boulders from the cliff face, which are found along the rocky foreshore. Take care of the seaweed covered rocks, which can be treacherous to navigate.

This entire site is part of the Jurassic World Heritage Coastline, is a SSSI and private land. No hammering on the cliff is allowed and digging is strictly forbidden. Damage has already been caused to the heritage site by people using power tools. This is strictly against SSSI rules and any attempt to ignore them may result in prosecution.

There are two areas to search:

At Osmington Mills, walk eastwards on the beach to the slipway at the Smuggler’s Inn car park. The lower cliffs are formed from the fossiliferous Nothe Grit Member of the Redcliffe Formation.

Although exposures are often poor, the grey sandy clay contains many fossil bivalves, particularly the large round oyster, Gryphaea dilatata and are worth exploring before the walk back.

At the lowest point of cliffs, near to the access point to the Smuggler’s Inn, there is a waterfall over the Preston Grit Member (formerly the Trigonia hudlestoni Beds) Here, you can find fossil bivalves (Pleuromya, Gryphaea and Myophorella hudlestoni). Occasionally, the trace fossil Diplocraterion parallelum can be seen.

Generally, the best fossils are found in the boulders along the foreshore. These can be split using a large lump hammer and a chisel. The material is very hard, so you will have to work for your finds. Occasionally, fresh cliff falls yield the ammonites Pictonia and Perisphinctes, which can be extracted from the fallen blocks. At low tide, check the foreshore exposures, as these can also contain good fossils, which the sea has washed out of the rocks for you.

The tall cliffs to the east give an unsurpassed sequence of the Corallian Group of rocks, which are Upper Jurassic rocks of Oxfordian age (163.5 to 157.3 million years ago) and form a very complex succession of limestones, marls, sandstones, silts and mudstones. The Middle White Oolite is crowded with the trace fossil Arenicolites variabilis, which leads onto the Trigonia Beds. Many fallen blocks contain the bivalve, Myophorella clavellata.

A fault then brings the Middle White Oolite Bed of the Osmington Oolite Formation, down to beach level. Search the fallen blocks for fossils of bivalves, echinoids and the ‘U-shaped’ burrows of the invertebrate, Diplocraterion parallelum, seen as trace fossils in the level-bedded oolite that forms the distinct ledge at the base of the cliff. The Middle White Oolite is also crowded with the trace fossil Arenicolites variabilis

At Bran Point, the landscape marks a distinct junction between the Kimmeridge Clay, so dominant in the cliffs at Ringstead Bay and the hard Corallian rocks of the Osmington Oolite Formation, displayed in the low cliff. The reef here, known as Bran Ledge and the foreshore is littered with the fossil clam, Myophorella clavellata from the Trigonia Beds.

From Osmington Mills, head west, where concretion blocks, which are derived from the Upper Greensand and slipped Gault Clay. These may contain oysters, serpulids, echinoids, the ammonite Hoplites, and other derived fossils. These can mainly be found along the beach below Black Head, where they have fallen from the rock strata high above or near to the large slumped and slipped mix of Kimmeridge Clay and Upper Greensand that has reached beach level.  Again,  the reef here, known as Black Ledge and the foreshore is littered with the fossil clam, Myophorella clavellata from the Trigonia Beds of the Corallian.

The geology of the rocks displayed at Osmington Mills is complex. The following simplified diagram helps explain the sequence. 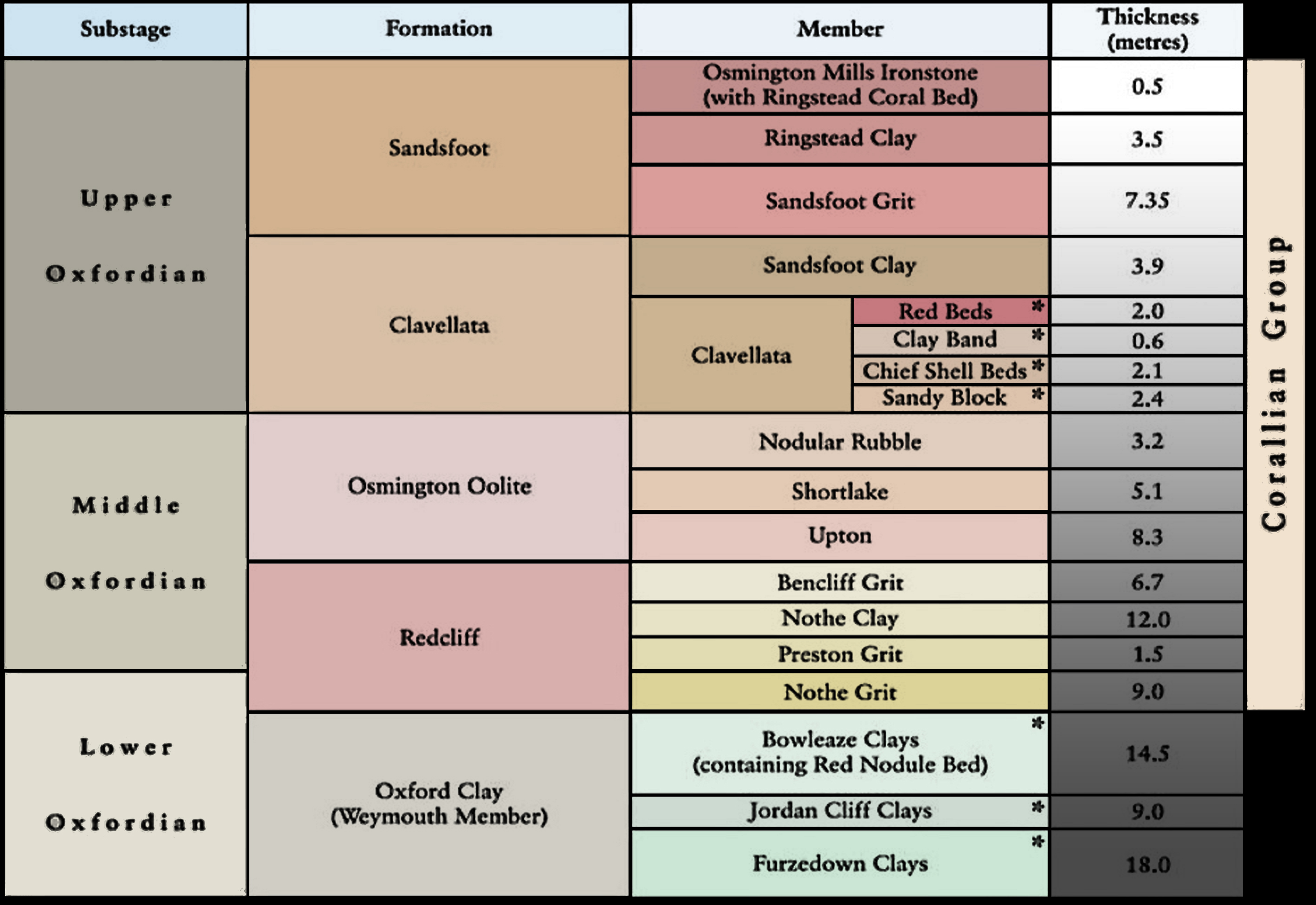 At the foot of the small cliff at Osmington Mills, the fossiliferous Nothe Grit and Preston Grit can be seen, the latter forming the small waterfall.

Westwards from the car park, a flat shingle beach, with septaria, is visible under the mudslide of Kimmeridge Clay. Here, the overlying Upper Greensand has also slumped onto the beach. At Black Head, the reefs are the Corallian harder beds of the Nothe Grit, with Bencliff Grit and Osmington Oolite forming much of the rock platform. Black Head takes its name from the black or really, dark grey, Kimmeridge Clay which forms the upper, rather slumped, parts of the cliff. Kimmeridgian ammonites and the gastropod Bathrotomaria reticulate can be found here. Fossils from the Gault can also be brought down to beach level from the rock strata high above.

The remaining rocks of the Corallian sequence (the Clavellata Beds, Sandsfoot Grit and Clay, Ringstead Clay) and the overlying Kimmeridge Clay are high at the top of the cliff and best studied in exposed sections at Ringstead Bay, where they come down to beach level beyond Bran Point.

Common sense when collecting at all locations should always be used and prior knowledge of tide times is essential. Care should be especially taken at Osmington Mills of tide times, as the sea can cut you off. Access down to the beach at Osmington Mills can also be dangerous after heavy rain, as mud slippages can make the path very slippery.

The material at Osmington is very hard and therefore heavy-duty hammers and chisels should be taken. Ideally, safety goggles should be worn when hitting rock and suitable walking shoes should be worn.