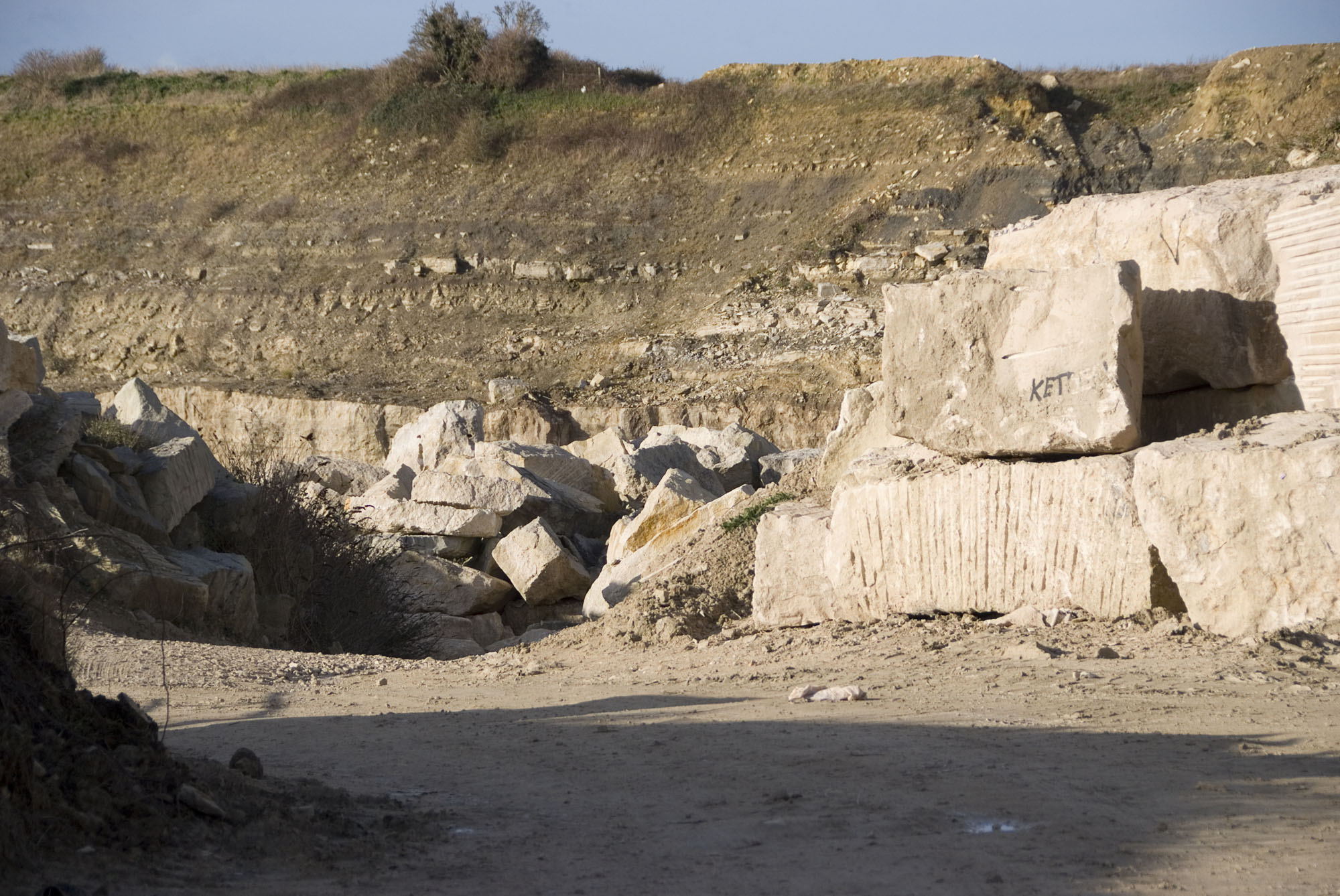 This working quarry (Perryfield Quarry) on Portland has a giant ammonite (Titanites) at its gates. Ammonites like this can be found here, but most quarries sell these and so do not allow collectors to remove these finds. However, trace fossils and molluscs can be seen in the Basal Shell Bed.

♦ Follow signs to the Isle of Portland from Weymouth and, once you are on the island, drive through the town of Fortuneswell. Follow the road from here to Easton. Then take Eastern Road towards the museum and continue down the eastern side of the island.
♦ There is car park just before Perryfield Quarry, where you can park. Or you can enter the quarry, if permission has been given.
♦ Access to this quarry requires prior permission from the quarry owners (see below). You will need to contact them before your trip to arrange. You will also require a hard hat, a high visibility jacket and steel toe-cap boots.
♦ Ref: 50.53860°N, 2.43302°W

FIND FREQUENCY: ♦♦ – Fossils at Perryfield Quarry are uncommon, since the best fossils (such as the large ammonites) are sold by the quarry owners. However, bivalves and trace fossils can be found.
CHILDREN: ♦ – Working quarries can be dangerous places and, therefore, children are not allowed at this location. Generally, most quarries will not allow anyone under the age of 16 to enter for health and safety reasons.
ACCESS: ♦♦♦♦ – The quarry is very easy to find, but you will need permission before your trip to enter and collect fossils.
TYPE: – This is a working quarry, fossils can be found from the loose, waste blocks, which are not reserved for building stone. Keep away from machinery and obtain permission before you enter.

You will need permission to enter this quarry. Permission can be gained by contacting the quarry manager at the following address: Portland Stone Ltd., Unit 26, Tradecroft Estate,
Portland, Dorset, DT5 2LN Tel: 01305 80044

Perryfield Quarry is still an active quarry and small area is set aside as a butterfly reserve. Today, having once been closed for many years, it has re-opened due to demand for the stone, Perryfield Quarry is Portland Stone Firm’s main production site.

As soon as you enter the quarry, you will see a giant ammonite, Titanites. These ammonites do occur at this quarry, but many are sold once they are found or they are broken. Fossils in Portland Stone require a hammer and chisel and plenty of work to extract.

Bivalves (Laevitrigonia gibbosa, Myophorella incurva, Protocardia dissimilus, Camptonectes lamellosus and Pleuromya tellina)and trace fossils of worm burrows are easily collected from the Basal Shell Bed, along with several different species of gastropods. Near the top of the sequence is a layer of algal burrs, which can be up to half a metre in diameter. The Portland Roach is also well represented here, with abundant specimens of the bivalves Laeritrigonia and Protocardia, and the gastropod Aptyxiella, together with the calcareous red alga, Solenoporella.

Portland Stone is one of the youngest Jurassic rocks, laid down just before the end of the period. Before the quarrying of Portland Stone can proceed, the unwanted material which overlies it, (the overburden) must be removed. Most of the top of Portland is covered with Purbeck Group limestones (the Lulworth Formation) of quite variable thickness, ranging from about 1m to 15m or more, across the Island.

The quarry is noted for its excellent stone quality and bed height. It is largely quarried for Perryfield Basebed, Roach, Shelly and Whitbed stone

The Perryfield Roach is a very open textured Freestone ( so named, as it can be worked in any direction) and is seen as a shelly stone. It is a durable stone, often used for sea defence work. It occurs at the top of the Portland Stone Formation’s Freestone Member and lies immediately beneath the Lulworth Formation’s Basal Dirt Bed. The junction between tne Roach and the Basal Dirt Bed represents a massive environmental change from a marine limestone to a terrestrial palaeosol.

“Whitbed”is almost certainly a corruption of “whitebed”. Whitbed is a fine grained, mainly oolitic limestone typically containing a proportion of comminuted shell fragments, ranging between~5 mm and ~50mm in diameter.  At Perryfield Quarry, the Whitbed stone is a popular buff white stone, containing shell fragments and is known to be a durable building stone. Fossils from the Whitbed include the large ammonite Titanites, oysters and other bivalves (Protocardia dissimilus, Camptonectes lamellosus and Pleuromya tellina), echinoids and occasionally, vertebrate bones. Well cemented Patch Reefs often occur within the Whitbed, these are comprised mainly of densely packed colonial bivalves such as Ostrea,and Plicatula along with bryozoans and the red calcareous algae Solenopora.

Beneath the Whitbed is the Curf (1m). Sometimes called the “Little Roach”, Curf comprise sa series of sandy Chert Beds interspersed with micritic and shelly limestones.

The Perryfield Basebed or ‘Best Bed’ is a tightly grained stone with very little shell content, similar in appearance to the Whitbed but with a slightly more buff colour. Basebed is often considered the finest quality Portland Stone available. Identifiable fossils are relatively rare in the

Perryfield Shelly has a slightly open texture and is described as a shelly stone but does not have the openness of Roach. It is exceptionally durable due to the high shell content.

Despite the high density of fossils in the Whitbed and Roach, these tend to be restricted to a small number of species. This low faunal diversity has been attributed to locally elevated marine salinity levels at the time of deposition.

Beneath the Whitbed is the Curf (1m). Sometimes called the “Little Roach”, Curf comprisesa series of sandy Chert Beds interspersed with micritic and shelly limestones. The Purbeck Beds are now covered in rubble, but once made up the top most part of the quarry.

Common sense when collecting at all locations should be used and prior knowledge of tide times is essential. The main issue to be aware of is the tide. It is easy to become cut off, so it is important to return at least three hours before high tide. The other danger is falling debris. Rocks frequently fall due to weather and birds. Therefore, hard hats are recommended.

Most of the fossils at Perryfield Quarry are found in the hard Portland Stone. You will need a good quality hammer, a chisel and safety goggles to extract any fossils. A crack hammer is recommended. You will also need a hard hat, a high visibility vest and boots with steel toe-caps.