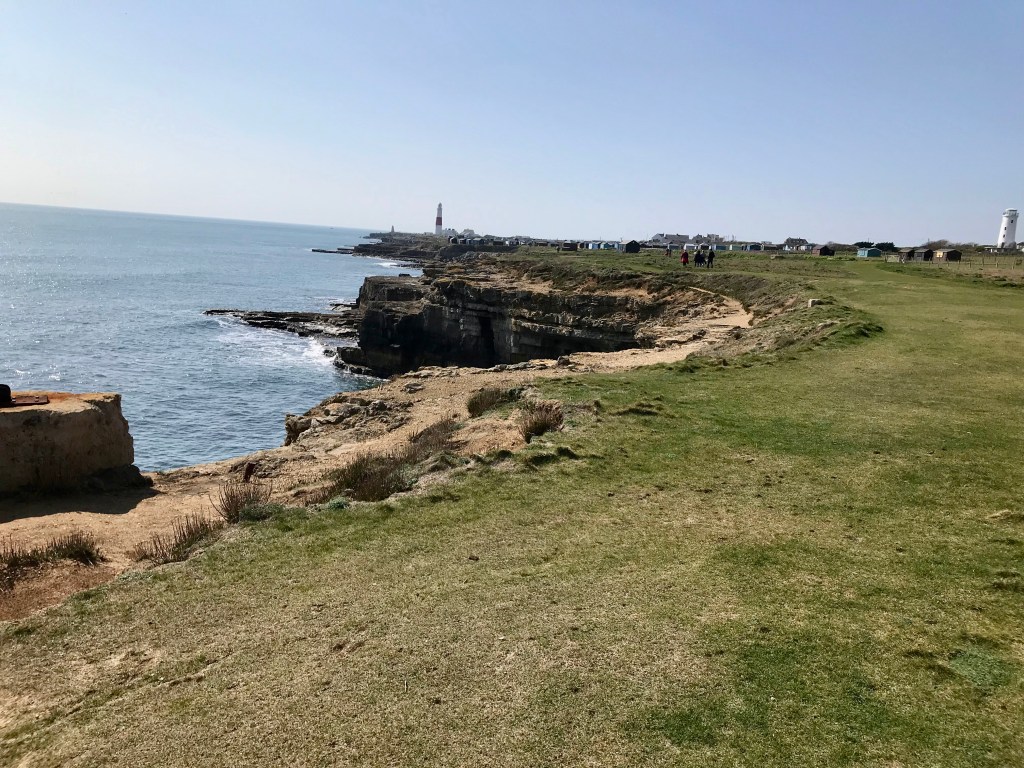 Portland Bill is the island’s main tourist attraction, with its lighthouses and the famous Pulpit Rock. The site has rocks scattered all around that contain fossils. These are a reminder of the island’s quarrying past and several long-abandoned quarries scar the landscape. Fossils are not usually very well preserved and only oysters and bivalves can be found, along with trace fossils. However, it is a nice location for a visit and a short walk along the coastal path allows access through one of these quarries, from which Portland Stone was once extracted.

♦ Being the island’s main attraction, accessing it is very easy. Simply follow the main road signposted to Portland Bill, or ‘The Bill of Portland’ as written on some maps.
♦ There is car park, but as it is privately owned and you will need to pay to park there. However, toilets are provided on site, and there is a museum and cafe, together with a pub.
♦ Walking from the car park, there are plenty of rocks that contain fossil oysters and other shells. West of the lighthouse, a raised beach can be examined that contains a range of Mesozoic rocks, Pleistocene gastropods and bivalves, as well as granite, bunter and quartzite pebbles.
♦ Ref: 50.51458°N, 2.45826°W

FIND FREQUENCY: ♦ – Fossils at Portland Bill are not common and those that can be found are poorly preserved. Most of the fossils are oysters and other molluscs, which are from the Portland Beds.
CHILDREN: ♦♦♦♦ – Portland Bill is suitable for children and toilets are provided on site.
ACCESS: ♦♦♦♦♦ – Access to Portland Bill is very good, because it is the main attraction on the island and is therefore easy to find.
TYPE: – Fossils are mostly seen in the rocks lying around from the disused quarry and in the quarry waste. They are most frequently found in the piles of rocks around this area. However, you should photograph rather than collect them, because this is private land and collecting is prohibited, and others should be given the opportunity to see and enjoy them.

The quarry is private, so collecting, hammering and taking samples is not permitted. However, within the rocks, scattered around the lighthouse area, you can see the burrows of animals (trace fossils), algae traces, bivalves and oysters, which are all common. We recommend photographing these and certainly do not recommend trying to remove them.

Portland Bill consists of gently south-dipping Portland Freestone, the base of which is at about sea-level here at the extreme southern point of the promontory. The oolitic limestone of the cliffs, the Portland Stone, which contains bivalves, gastropods and giant ammonites, was deposited in  late Jurassic seas. Now it is being eroded vigorously by the modern sea to produce a wave-cut platform. The Portland Stone has been much quarried in the past and where it is near sea-level it been much undercut by sea erosion into broad caves. The whole of the landscape here bears testimony to the island’s past quarrying activity.

The Portland Cherty Series lies underneath the Portland Freestone. It is at sea-level downwards at the Bill itself but gradually rises northward to form resistant vertical cliffs.

At Pulpit Rock, it forms the lower part of the cliff. Pulpit Rock forms a small promontory northwest of Portland Bill. The tradition is that there was once a natural arch at this small headland. The succession is Portland Cherty Series from sea-level (and below) to about the level of the flat platform. Above this was Portland Freestone, the oolite. This is still preserved in Pulpit Rock.

At Pulpit Rock the sequence is:

At the top of the cliff, a broad raised beach platform cuts across the Purbeck strata and this unconformable sediment, resting on an older wave-cut platform is Pleistocene in age. It has been classified into two raised beaches, both largely consisting of shelly and sandy pebble deposits. The pebbles of the raised beach consist of Chalk flint, Upper Greensand chert, Portland and Purbeck chert and limestone with rarer pebbles of granite, porphyry and the distinctive Bunter quartzites from the Budleigh Salterton pebble bed. Fossil gastropods, especially Littorina littorea and the dog whelk, Nucella lapillus are common, as is the limpet, Patella.

Fossils can be seen in much of the Portland Stone at Portland Bill and within the old quarries, which are open to the public and close to the Bill itself. This entire site is SSSI and the collection of fossils, or hammering and chiselling them from the rock is not permitted.

Common sense when collecting at all locations should always be used and prior knowledge of tide times is essential if exploring the foreshore at Portland Bill. The sea often reaches the base of the cliffs, so you could become cut off.

This is private land. Therefore, the best bit of equipment to take is a camera to photograph rather than collect the fossils.