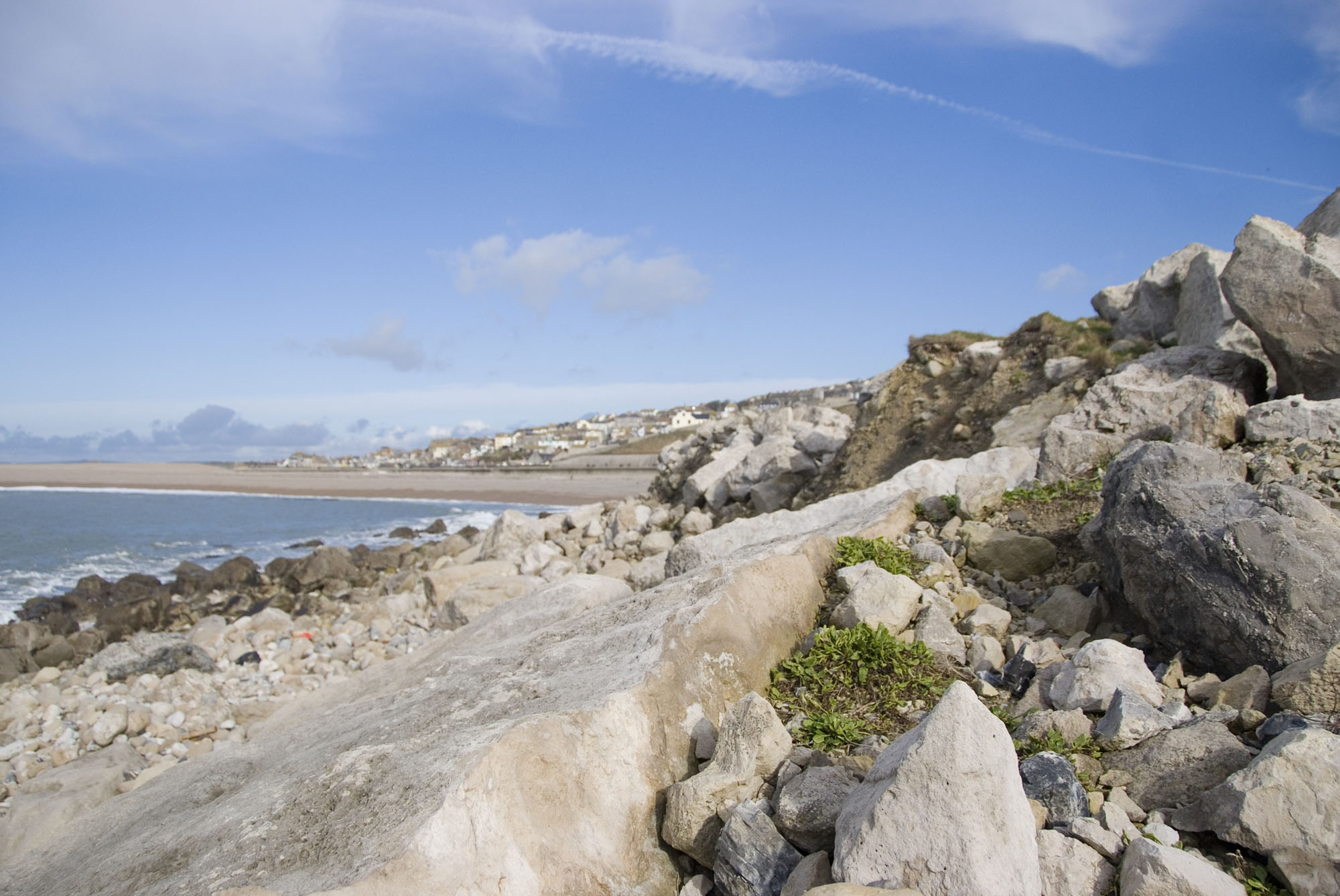 West Weare is the best location on Isle of Portland for fossil hunting. While most of the island consists of Portland Stone, this location is Kimmeridge Clay. Most of this clay on the Isle of Portland is covered, but, here, it can be found slipped between the debris of the quarry.

♦ Fortuneswell is the capital of the Isle of Portland and the cliff at West Weare (West Cliff) runs just to the southwest of the town. Parking can be found to the west of the town, not far from the local school.
♦ There is a one-way system on the Island, so you will need to go through the town, up the hill and back around onto the main road towards Chiswell, where you can park and get access to West Cliff.
♦ Parking is free on the Isle of Portland (with the exception on the privately owned car park at Portland Bill). From the car park, walk south and then along the promenade to the end, where you will find some steps onto the beach.
♦ Ref: 50.55860°N, 2.44845°W

FIND FREQUENCY: ♦♦♦ – Fossils at West Weare are fairly common. You are likely to find many brachiopods and bivalves, but complete ammonites are hard to find. However, plenty of broken ammonites can be seen. Ammonites can also be found in nodules.
CHILDREN: ♦♦ – This site is not suitable for children, as there are too many rocks along the foreshore, which makes walking difficult. In fact, is not easy going.
ACCESS: ♦♦♦ – Accessibility to West Weare is fairly good, although it can be hard to find, due to the one-way systems.
TYPE: – Fossils are found between the rocks and boulders, where the Kimmeridge Clay has slipped.

There are no collecting restrictions on the Isle of Portland, but sensible collecting is important for all locations.

At West Cliff, fossils can be found in the slipped Kimmeridge Clay. Ammonites, bivalves and brachiopods are the most common finds here. Ammonite fragments can be found along the foreshore, but it is much harder to find complete ammonites. However, nodules do contain complete specimens, but these are not common.

In particular, search the areas around the clay, but also try spitting the darker rocks and any nodules you see within the Kimmeridge Clay.

This entails negotiating a very difficult stretch of coast and some scrambling up the lower and less steep part of the lower cliffs, which are less steep. The base of the succession is consists of the grey Kimmeridge Clay Formation, which has yielded ammonites.

The Portland Sand succession is

The cliff here would have been at least 12 m higher; the overlying Freestone Member and Lulworth Formation having been quarried away.

The Kimmeridge Clay at West Weare is much covered  in the quarry overburden. In bygone years, the ‘weares’ were common sheep grazing land until they passed into private ownership and then the quarry overburden and waste was simply dumped on them, by tipping over the edge of the cliffs. The Kimmeridge Clay is not as fossiliferous as at other parts of the Dorset coast but a good variety of bivalves and gastropods, with reptile bones of plesiosaurs, ichthyosaurs and pliosaurs turning  up with some frequency.

Common sense when collecting at all locations should be used and prior knowledge of tide times is essential. At West Weare, the rocks can be very dangerous. You will need to clamber over these and the Kimmeridge Clay that can be found slipped between these rocks makes them potentially very slippery.

Most of the fossils at West Weare are found by searching in the clay. Fossils are usually found just waiting to be picked up. However, ammonites can also be found in nodules and, for these, you will need the right tools – a hammer and chisel, together with safety goggles.