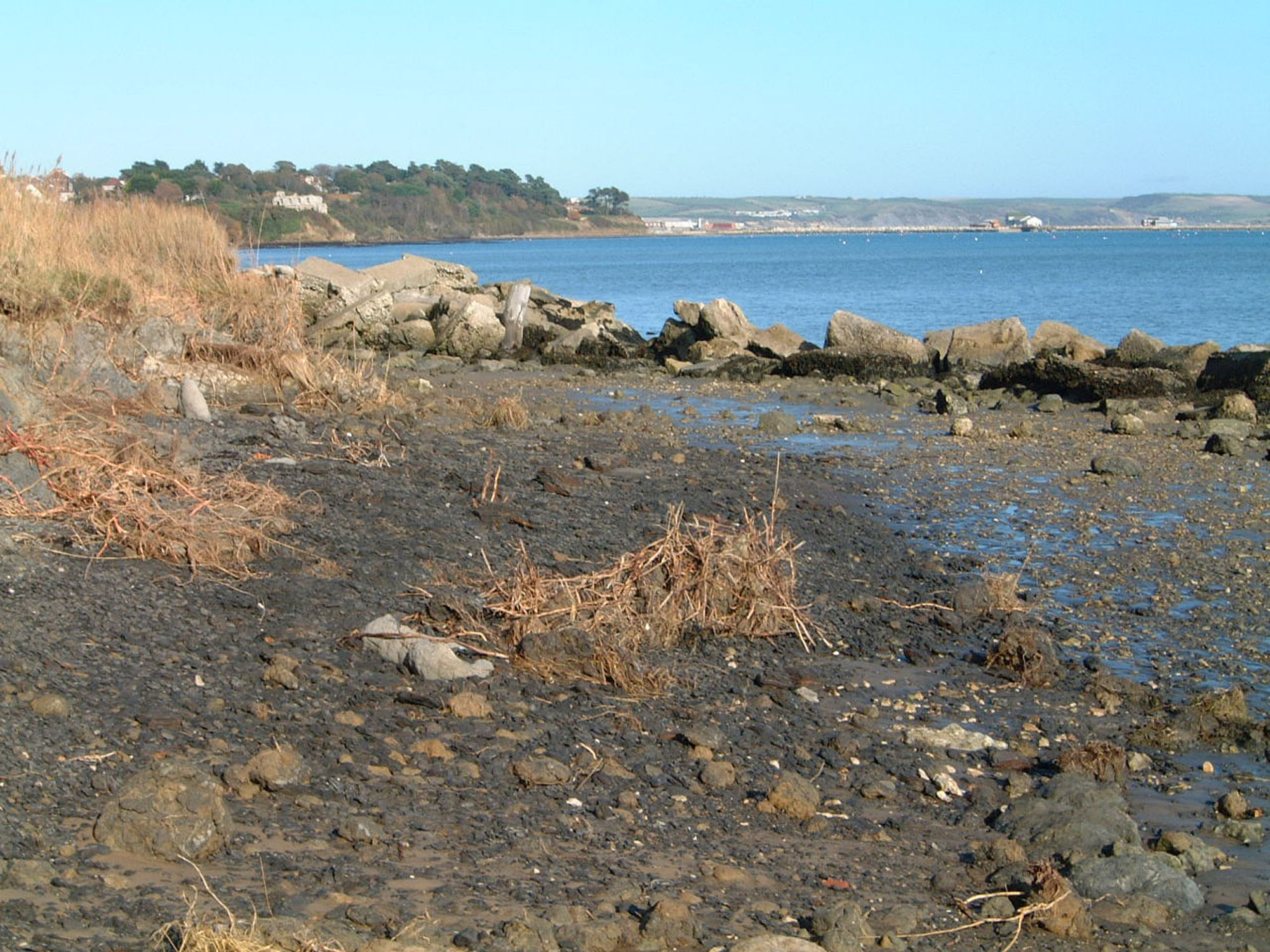 Wyke Regis offers two locations which are rich in fossils from the Kimmeridge Clay of the Upper Jurassic. To the west, you can collect along the East Fleet, which is behind Chisel Beach. To the east, you can collect along the banks of Portland Harbour, where rocks from the Corallian can also be seen. Large oysters, plentiful bivalves, gastropods and ammonites can be collected. Bones and teeth of marine reptiles may can also be found.

♦ Wyke Regis can be reached by heading towards Portland from Weymouth along the A354.
♦ If travelling by car, you will need to continue past Wyke Regis, heading over Ferry Bridge to Portland. About half way across this crossing, the large car park of the Chesil Beach Visitor centre and cafe can be seen on the right. This is a pay-and-display car park.
♦ From here, head back towards Wyke Regis walking along the roadside footpath. Once you cross over Ferry Bridge, you can either walk west, along East Fleet, or east, to Portland Harbour. The east end tends to be the most fossiliferous for shells, but the west end has yielded some bones.
♦ Ref: 50.57843°N, 2.46975°W

FIND FREQUENCY: ♦♦♦ – Fossils at Wyke Regis are very common, but are mostly oysters, in particular, the giant flat oyster (Deltoideum sp.). Other fossils are much rarer.
CHILDREN: ♦♦♦♦ – Wyke Regis is suitable for children, but they will need boots and must keep away from the mud flats. Also check tide times and visit on a falling tide.
ACCESS: ♦♦♦ – The site is a fairly easy location to access, with a cafe, toilets and parking nearby.
TYPE: – Most fossils are found on the foreshore, exposed both in the harbour and also along East Fleet. These can often be simply picked up loose.

To the west of Wyke Regis, you can walk along the foreshore of the tidal lagoon of East Fleet. This is directly behind Chisel Beach. The Kimmeridge Clay foreshore is very muddy, so it is best to stay as close as possible to the banks. Some of these consist of low cliffs, which are overgrown; others are man-made. Walk beyond the WW2 pill box for the most productive area and where fossils can usually be easily picked up from the foreshore. A knife or pick may be useful in removing them from the clay, but, generally, no tools are needed.

This end is particularly good for reptile remains but these tend to be further out from the banks and washed out of the Kimmeridge Clay by the sea. Over the years, a large number of bones and teeth of fish and reptiles have been found here by local collectors, including the delicate bones of pterosaurs. Ensure that you have a low tide at this location.. Worm tubes are a common find, especially the serpulid Cycloserpula intestinalis.

Walking from the east of Wyke Regis takes you into Portland Harbour. This very large harbour has banks on the northwest side, which are entirely of Kimmeridge Clay. Walking can be difficult at this end, since you will occasionally need to climb over some of the banks. There is little foreshore at this end, but the foreshore that is exposed, is highly productive in shells and the ammonite Ringsteadia. Further along, the remains of Henry VIII’s Sandsfoot Castle can be seen, perched on the Sandsfoot Formation cliff. Fossils can be collected from here, especially a variety of bivalves, including Pinna sandsfootensis.

Near Ferry Bridge, Kimmeridge Clay is well exposed along both banks. The flat oyster, Deltoideum delta. is the most common fossil, with large and well-preserved specimens found scattered around at the west end of this area.The bivalve, Ctenostreon, and the smaller oyster, Nanogyra, are often found. Ammonites (Pictonia) are also well known from this location.

At Wyke Regis and Ferry Bridge, the upper beds of the Corallian and the lowest bed of the Kimmeridge Clay (both from the Upper Jurassic) are well exposed. Sandsfoot Grit can be seen to the northwest. Walking further west towards Camp Road, Nothe Grits can seen to the west of the coastguard station, together with some very good exposures of Osmington Oolite. East of Ferry Bridge at Sandsfoot Cove near Castle Cove, Osmington Oolite is followed by the Trigonia Beds. However, the Corallian sequence is not so well exposed as the section displayed at Osmington Mills (see the page on this website).

Common sense when collecting at all locations should be used and prior knowledge of tide times is essential. There are two main dangers to take note of – the first is the tides, as you can get cut off in places; and the second is the mud on the banks of the harbour, and also from the foreshore along East Fleet. Stay next to the low cliffs and do not attempt to go too far out onto the foreshore, as it is possible to become completely stuck.

A pick or knife is best for extracting fossils from the clay. Suitable footwear or boots should be worn, as the clay along the harbour banks and on the East Fleet foreshore in places can be quite sticky. Many of the fossils are quite hard, so small bags and containers will be fine for transporting them home, where they can be cleaned.

This site is an SSSI and forms part of the UNESCO World Heritage Jurassic Coast. This means you can visit the site, but hammering the bedrock is not permitted. For full information about the reasons for the status of the site and restrictions please download the PDF from Natural England – SSSI Information – Chesil and the Fleet