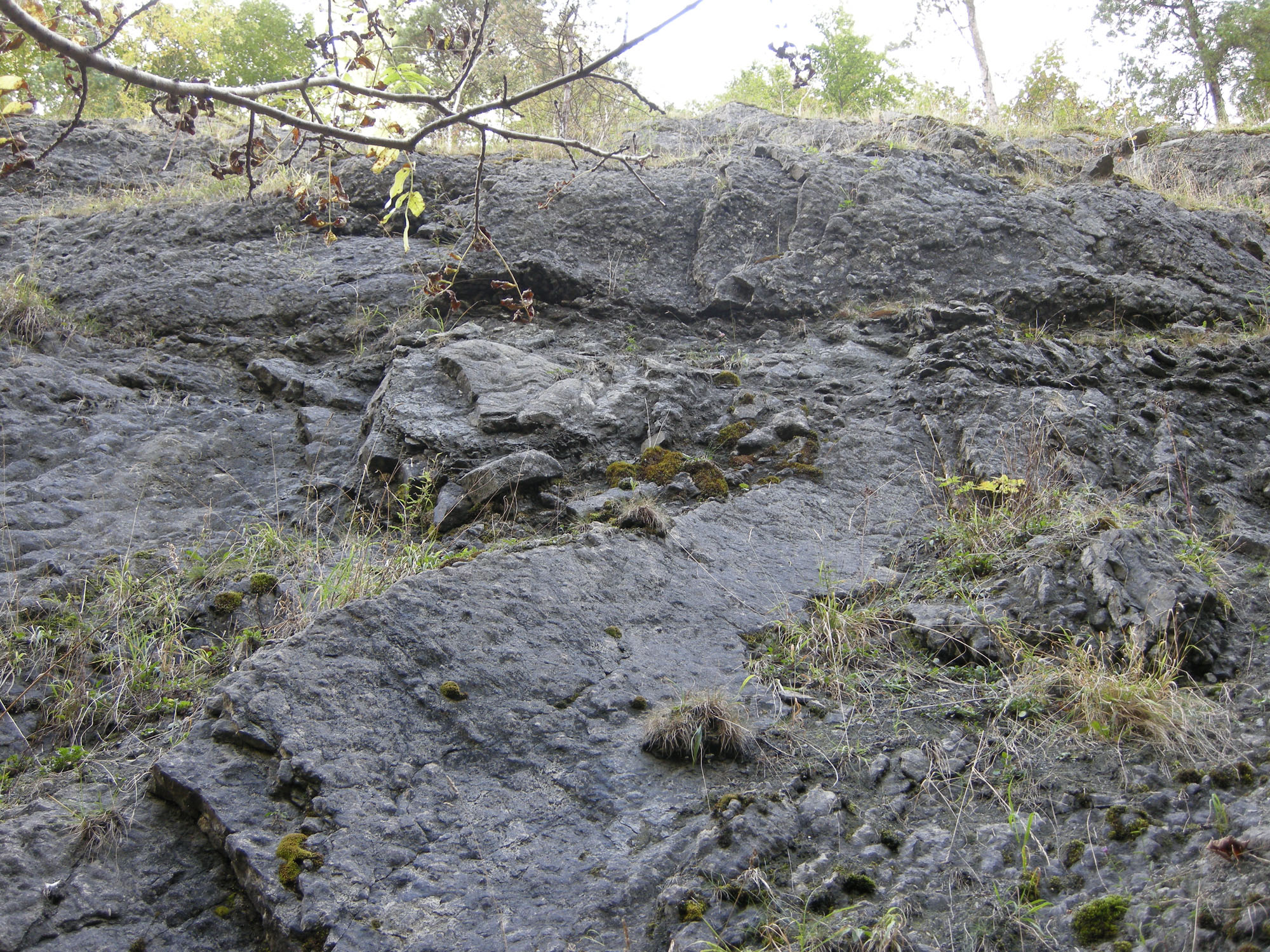 Ordovician rocks at Craighead Quarry are very fossiliferous and this disused quarry is often visited by local schools and colleges to study the fossils and geology at this site. While it is now quite overgrown, there is still plenty to be found. The most common finds are graptolites, brachiopods, trilobites and goniatites.

♦ Follow the B741 from north of Girvan. The road will cross over and under the railway line three times. After the third time, the railway line is on your right.
♦ Just after this point, there are some buildings on the left, with a road leading to Drummuck. Take this road and you will see the quarry on the left hand side, around a bend shortly after the turn off. Either park to the right of this quarry (which can be very muddy after rain) or continue up the hill and park at the top on the right hand side.
♦ Do not try to enter the quarry from the roadside. Instead, walk down the first trackway at the bottom of the hill. You will pass some old buildings and some beehives. There is a second trackway further up from the first, but this reaches a dead end with more beehives.
♦ The track will come to an end and the quarry is to the right in the trees. Follow the path through the copse and you will then see the scree slope of the quarry.
♦ Ref: 55.27472°N, 4.78109°W

FIND FREQUENCY: ♦♦♦ – Fossils are very common in this quarry, but, because it is now fairly overgrown, it can be difficult to find good specimens. Most of the original face is now covered in scree, so it will be fragments that you will tend to find. However, there is still one side of the face that is solid bedrock, where good specimens can still be found. Fossils can also be found at the bottom of the scree slopes.
CHILDREN: ♦♦♦♦ – Older children can visit this site, provided that they do not climb on the scree slope and they keep clear of the steep sides.
ACCESS: ♦♦♦♦ – Although the quarry is along the main road, it is not accessible from there. Rather, you will have to walk along the track leading to the back of the quarry, where one face is still accessible, and this is where the fossils are found.
TYPE: – Fossils can be found in the scree slope and in the bedrock of this disused quarry. They are easier to find in the scree slopes, but the best specimens are in the rocks fallen from the right hand side of the face. The accessible area of the quarry is only a very small section of the quarry. However, the rest of the quarry is too dangerous and overgrown.

Once you find the accessible area of the quarry, you will see a scree slope in front of you. Fossils can be found in the scree, but they are mostly fragments. The best area to look is on the right hand side of the quarry. You will see a good face with fallen rocks at the bottom. Fossils can be found in this face and in the rocks at the bottom. Split the rocks and fossils can be often found inside. This quarry is regularly visited by schools and colleges, and so over the years it has become over-collected. In addition, the scree slope has now covered most of the best beds. Therefore, only take a few specimens to preserve the site for future generations of students. Although the quarry is quite big, only a small section is accessible. The rest of the quarry is dangerously steep and overgrown, so stick to the section at the back of this quarry.

The Balclatchie Formation represented at Craighead are of Caradoc age from the Ordovician (450myrs old). These rocks are a blue-grey nodular mudstone with siltstones and conglomerate units. It is 300m at its maximum thickness and rests on the Benan Conglomerate Formation.

Craighead Quarry can be very boggy, especially during the winter and after heavy rain. Some areas have steep sides. Access to the quarry should be made from the old track road, which takes you round to the back entrance. Trying to enter the quarry from the main road is too dangerous, due to the steep sides and overgrown floor.

Most fossils can be found by searching the scree slope, but a hammer or pick will come in handy for the larger rocks, which contain the best specimens.