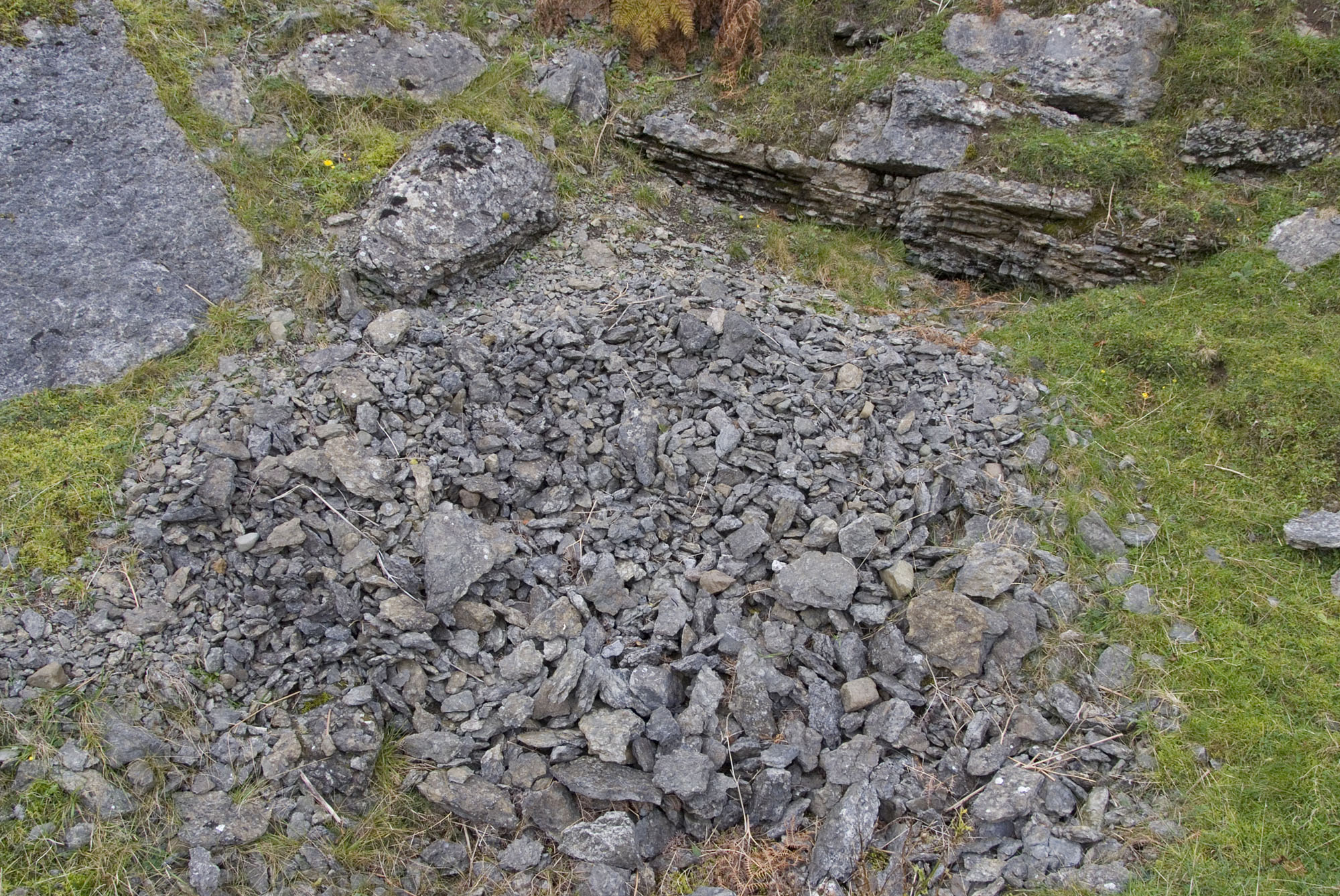 The volcanic rocks at Aldons Quarry contain a variety of Ordovician fossils, including trilobites, brachiopods, bivalves, cephalopods, gastropods, graptolites and goniatites. They can be found in mudstones, which can be seen in the scree slopes.

♦ Aldons can be found along the A714, north of Pinwherry and south of Pinmore.
♦ There is a small church, which can be seen just on the western side of the road (on the left hand side, if travelling from Pinwherry).
♦ You can park near the church and walk west up the road leading uphill. Follow the road, through the wooden gate all the way to the end.
♦ Climb the embankment ahead, where the road U-turns uphill turning back on itself. You should then see the quarry to the northwest. It has a small farm building near it.
♦ Ref: 55.16769°N, 4.83182°W

FIND FREQUENCY: ♦♦♦ – Fossils at Aldons can be fairly common, but they are hard to spot. Most of the rocks are very hard, but where they have been weathered, the fossils are easy to see.
CHILDREN: ♦♦♦♦ – This location is fairly safe, so children can visit, but they must be supervised at all times.
ACCESS: ♦♦♦ – The quarry is a short walk from the church, so it is easy to access. However, the church can be difficult to find, as it is well hidden. We advise taking an OS 1:50,000 or 1:25,000 map, which shows the location of the quarry.
TYPE: – Aldons Quarry is disused quarry and is mostly overgrown, but still has some good sections of scree to look through. Note that part of the quarry is being used by the farm for storage, with a building at the entrance. The best beds are towards the back of the quarry, away from this building.

Although permission is normally given, the owners of the quarry live at the white cottage to the left of the church and we suggest that you seek permission to visit the site, as the quarry is being used by the farm.

While most of the quarry is now quite overgrown, there are still some good sections to search. One of the best is a scree slope to the left of the building at the middle-back of the quarry. Here, there are not only small scree fragments, but some larger rocks too.
No tools are required, just patience and a good eye. There are so many different fossils that can be found in this formation, but the most common are trilobites and goniatites

The volcanic Benan Conglomerate Formation found at Aldons is part of the Barr Group and is Ordovician in age, being from the Caradoc age (which is 450myrs old). The Barr Group consists of conglomerate, limestone and mudstone, shallow marine and fan delta deposits.

This formation at its maximum thickness is 640m at Aldons Hill, but thins to 90m to the west and northwest. Here, the formation consists of a boulder conglomerate containing matrix supported clasts up to one metre across. The clasts consist mainly of basalt, dolerite and gabbro.

The quarry at High Aldons is a fairly overgrown, so the risk of falling rocks is small. The best areas to collect from are the scree slopes, on which care should be taken. Note that sometimes farm animals are in the quarry. The best advice is to check with the owners whether the quarry is in use and whether there are any dangers. They live at the white cottage just at the bottom of the road, near the church.

You may need a pick at this location, as the beds are quite soft and there is a lot of scree. The most important item to take is paper and containers to wrap up and keep the fossils safe. However, fossils can usually be found by simply searching through the scree, so little or no equipment is usually needed.