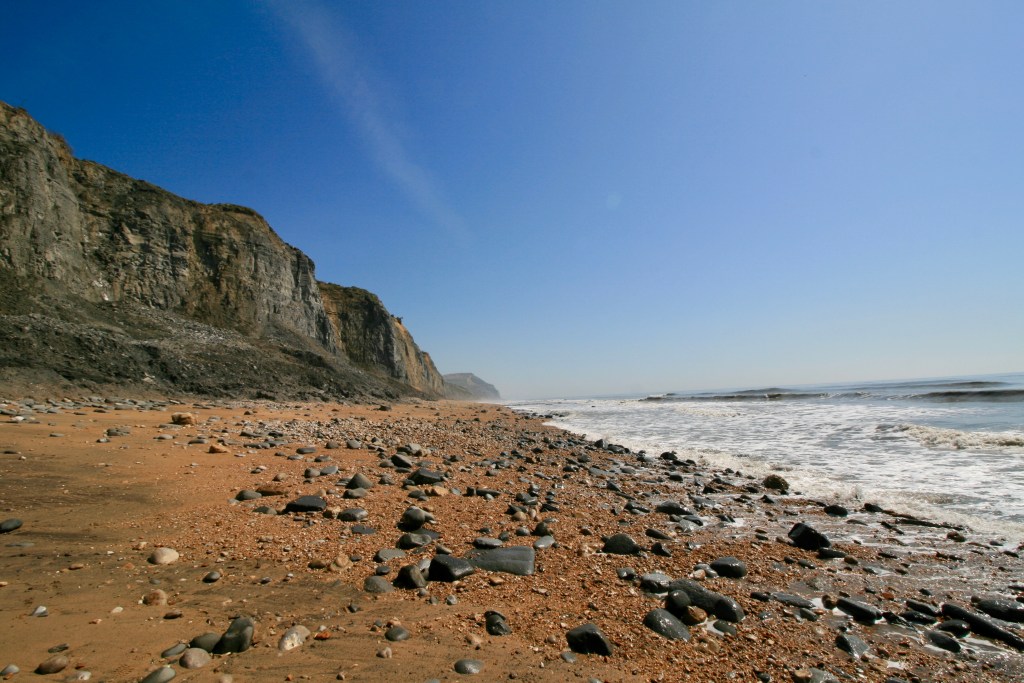 This Jurassic Coast World Heritage Site is one of the most famous and popular locations in the world, yielding plenty of fossils for the thousands that come collecting every year. Undoubtedly, Charmouth is at the heart of it all. This geological guide features both the cliffs of Black Ven, west of  the town and beneath Stonebarrow, 0n East Beach to the east.

♦ The beach at Charmouth is easy to access. Just head into Charmouth and then down Lower Sea Lane, where there is a large car park next to the sea.
♦ There are also toilets, an information centre and a cafe/food nearby.
♦ At the start, you will need to decide if you want to go to Black Ven or Stonebarrow: there may not be time to complete both ends safely in one tide.
♦ Black Ven will also take you to Church Cliffs (see our guide to Lyme Regis for more information on Church cliffs).
♦ If you are heading to Stonebarrow on East Beach, you will need to walk east, over the River Char via a small bridge and onto the beach.
♦ Ref: 50.73160°N, 2.88596°W

FIND FREQUENCY: ♦♦♦♦♦ – Charmouth is world famous for its highly fossiliferous cliffs. These cliffs of sticky mudstones and clays are attacked constantly by the sea and the fossil content is brought down onto the beach,  replenished by the tides, on a daily basis. Charmouth is also widely known for being the most commercial fossil location in the UK. The large number of commercial collectors, who  battle it out for the best finds, makes collecting limited, unless you are willing to brace the harsh winter storms. In spite of this, there is still plenty to be found on the beach and foreshore.
CHILDREN: ♦♦♦♦ – Charmouth is one of the best locations for children. They can sit on the beach or walk along the foreshore and pick up ammonites, belemnites and other fossils.
ACCESS: ♦♦♦♦♦ – The car park at Charmouth is very close to the beach and nearby are toilets, a cafe and the Charmouth Fossil Heritage Information Centre. The location is excellent for children and families.
TYPE: – Fossils are mostly found on the foreshore at Charmouth but can also be found at the bottom of scree slopes, slippages and occasionally after a cliff fall. Hammering the cliff is not permitted because Charmouth is part of the Jurassic Heritage Coastline. Anyway, you are far more likely to find fossils lying on the foreshore.

This site is part of the Jurassic World Heritage Coastline, SSSI and private land. No hammering or digging is allowed in the bedrock or cliffs. This is strictly against SSSI rules and any attempt to ignore them may result in prosecution.

Stonebarrow lies to the east of the car park. It forms a continuous cliff along East Beach, all the way to Golden Cap. The first cliffs encountered are made up of Black Ven Marl Member, famed for its pyritised ammonites. These are by far the most common fossils under Stonebarrow. Many smaller ones can be simply collected from along the sandy foreshore and shingle, on a retreating tide. The larger pyrite ammonites can also be found at Stonebarrow, especially during scouring tides, exposed in the clay particularly nearer to Golden Cap. We advice that you look for fossils on the foreshore. Stay well clear of the base of the cliffs and try to ignore the many who believe this is the place to look! The cliffs are highly unstable and are prone to sudden collapse at all times. On the beach and foreshore, the tide has already done most of the work for you and separated the fossils from the sticky mudstone. 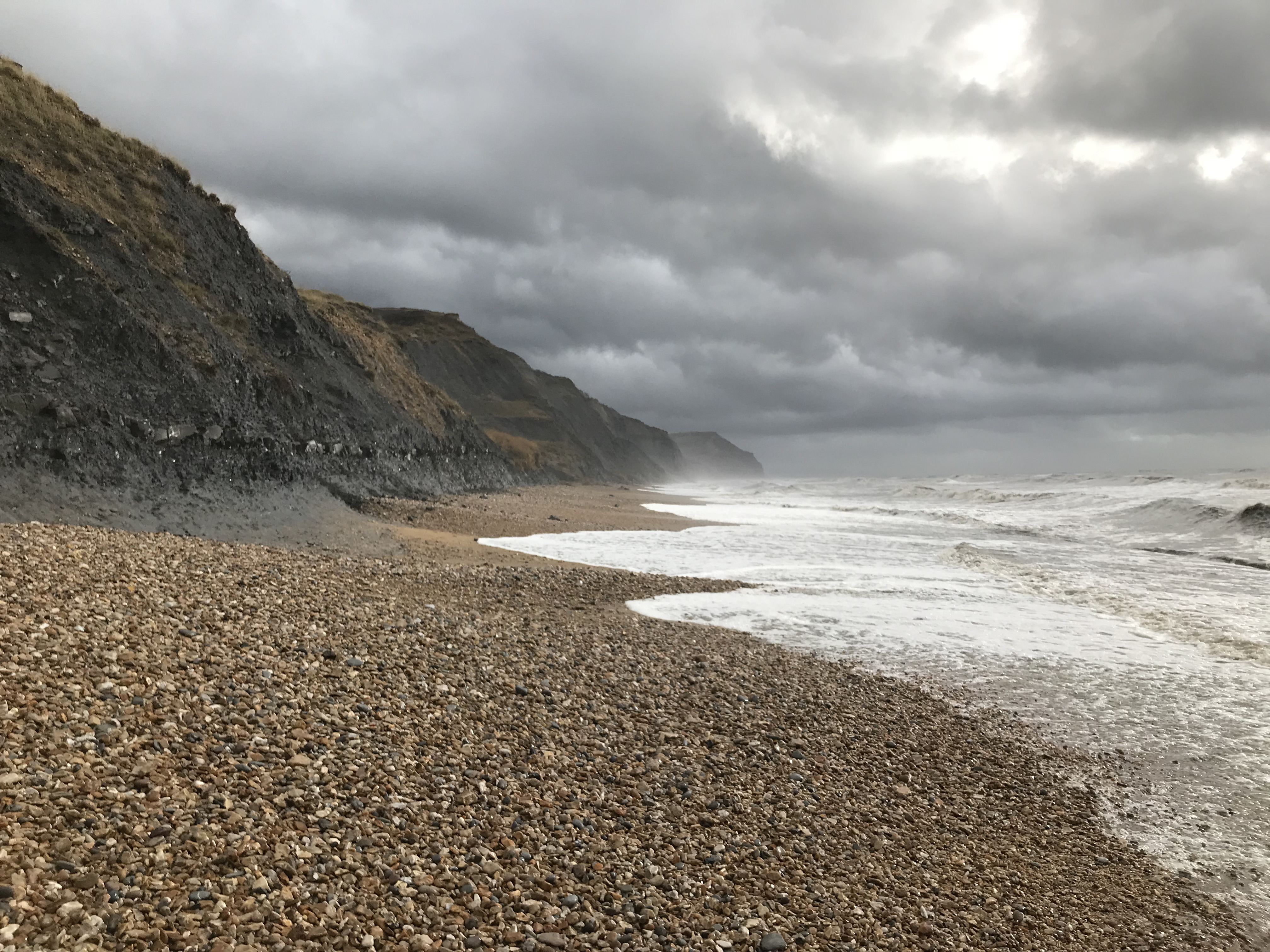 Look for strands of the darker material on the tide line. This is pyrite and the ammonites, belemnites, crinoids and other smaller fossils are found here in numbers, if you have a keen eye. It’s a hands and knees job but an hour or two of patient searching can be very rewarding, especially for children. Sections of ichthyosaur jaw and teeth also often show up under Stonebarrow.

The fossils found at East Beach, under Stonebarrow, are a great way to start a collection. Some examples are shown. Further east towards Golden Cap, the overlying Green Ammonite Member appears at beach level, in which nodules, containing exquisite fossils, can be found. These nodules or ‘greens’ will need to be carefully prepared using an air pen and abrasive. This is an activity for the more experienced fossil collector and requires skill to prep the nodules and knowledge of the terrain, in order to find them. These cannot be ‘cracked’ with a hammer, else the fossil inside will undoubtedly break. Remember, these cliffs are not safe, even in the summer months. 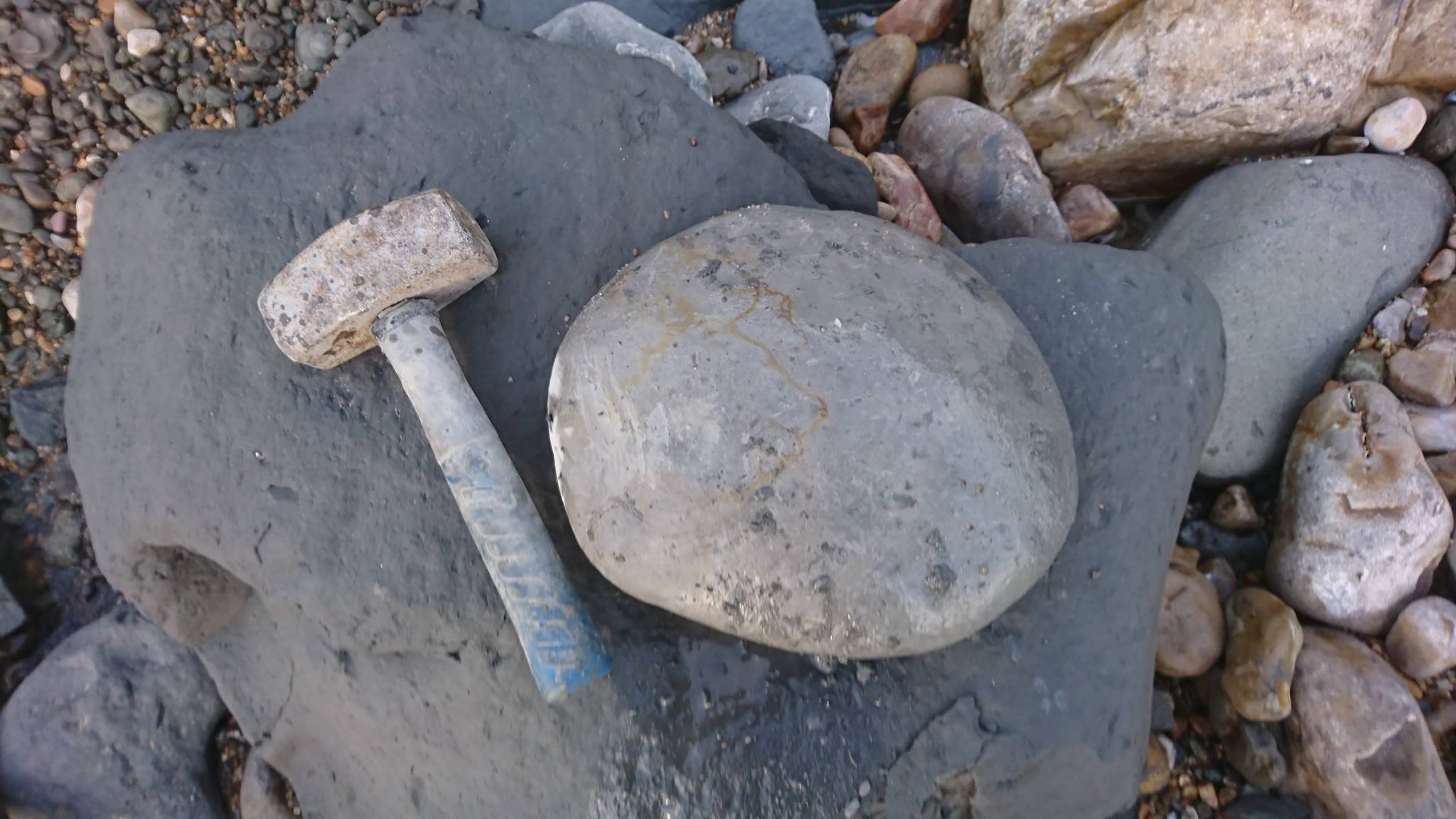 Black Ven lies to the west of Charmouth, towards Lyme Regis. This is the largest land slip in Europe and the crumbling cliffs are extremely dangerous. Do not attempt to climb any part of it. Mudflows, crumbling rocks and falling debris make this section hazardous but safe enough at beach level, away from the cliff base.

On a low tide, the area below Black Ven is an excellent area to look for fossils. Waves deposit fossils, that have been washed out of the cliffs, between rocks and boulders. Fossils are frequently pyritised. The flatstones at Black Ven can contain well-preserved ammonites and insects, but are unfortunately rare and only a small percentage contains fossils. Complete fossil fish have been found in these nodules, in perfect condition. 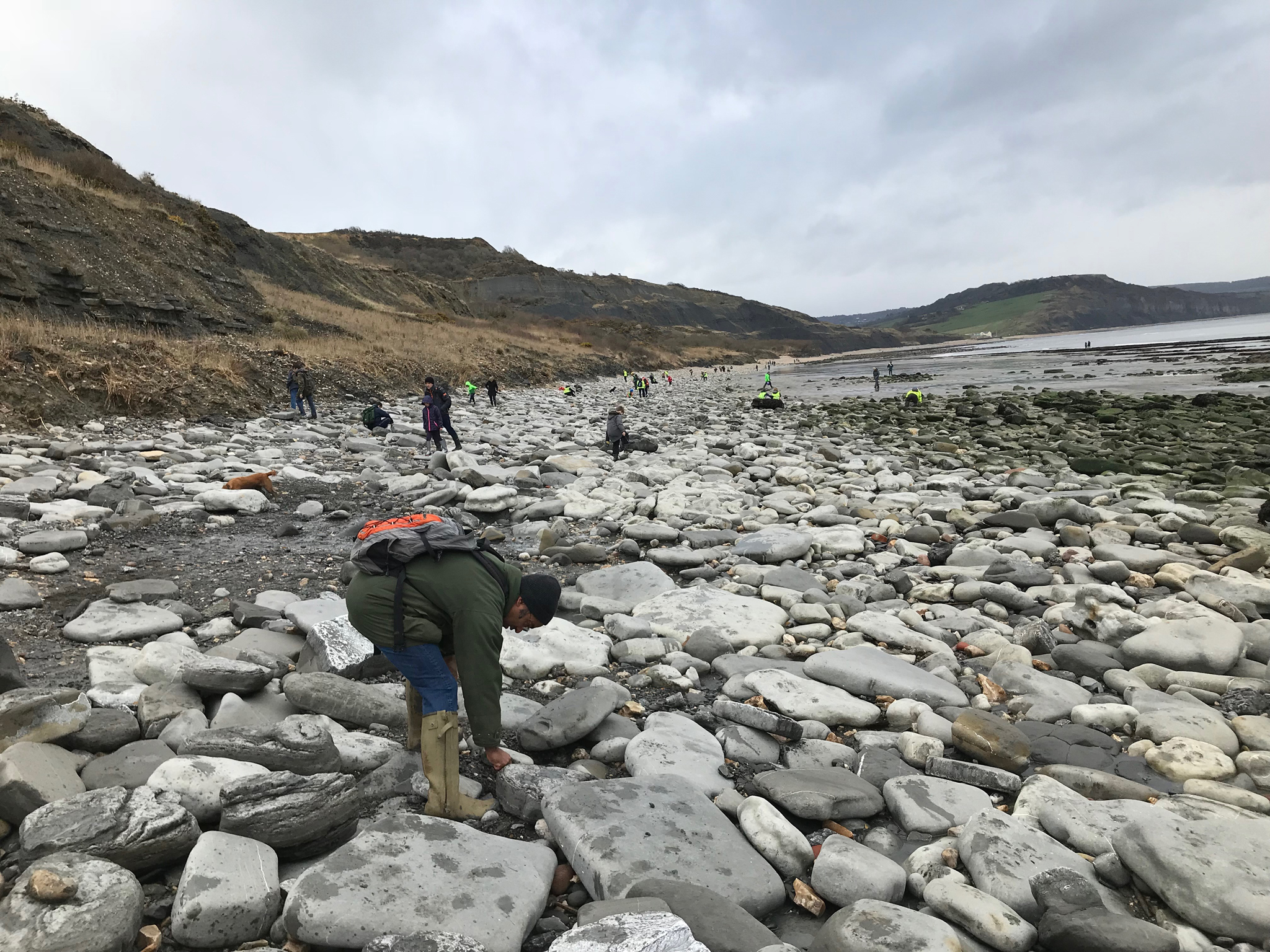 Black Ven itself is famous for ichthyosaur bones, which are washed out of the slippages of clay. Look out for vertebrae which are commonly found!

The top beds at Black Ven contain many good fossils, including fish and large nodules that occasionally contain ammonites. These beds are so high up that cliff falls are required but during extremely high tides, these top beds often fall or slip down to beach level. Many reptiles have been found and Black Ven has been the place of many discoveries of new species. 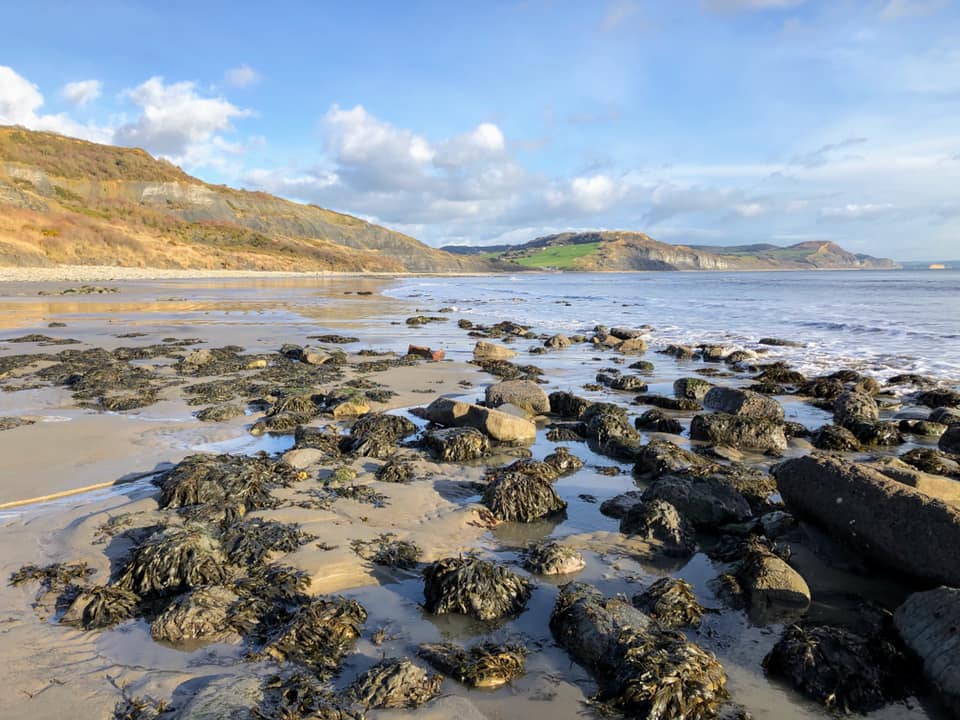 Also, keep an eye open for the flatstones, as these can contain some superb fossils, but you will need a hammer. There is also a special way of splitting these nodules. Split them from on the side rather than on the flat top/bottom, because hitting these nodules incorrectly will most likely split the fossil inside or shatter it. Do not attempt to dig these nodules out of the cliff! 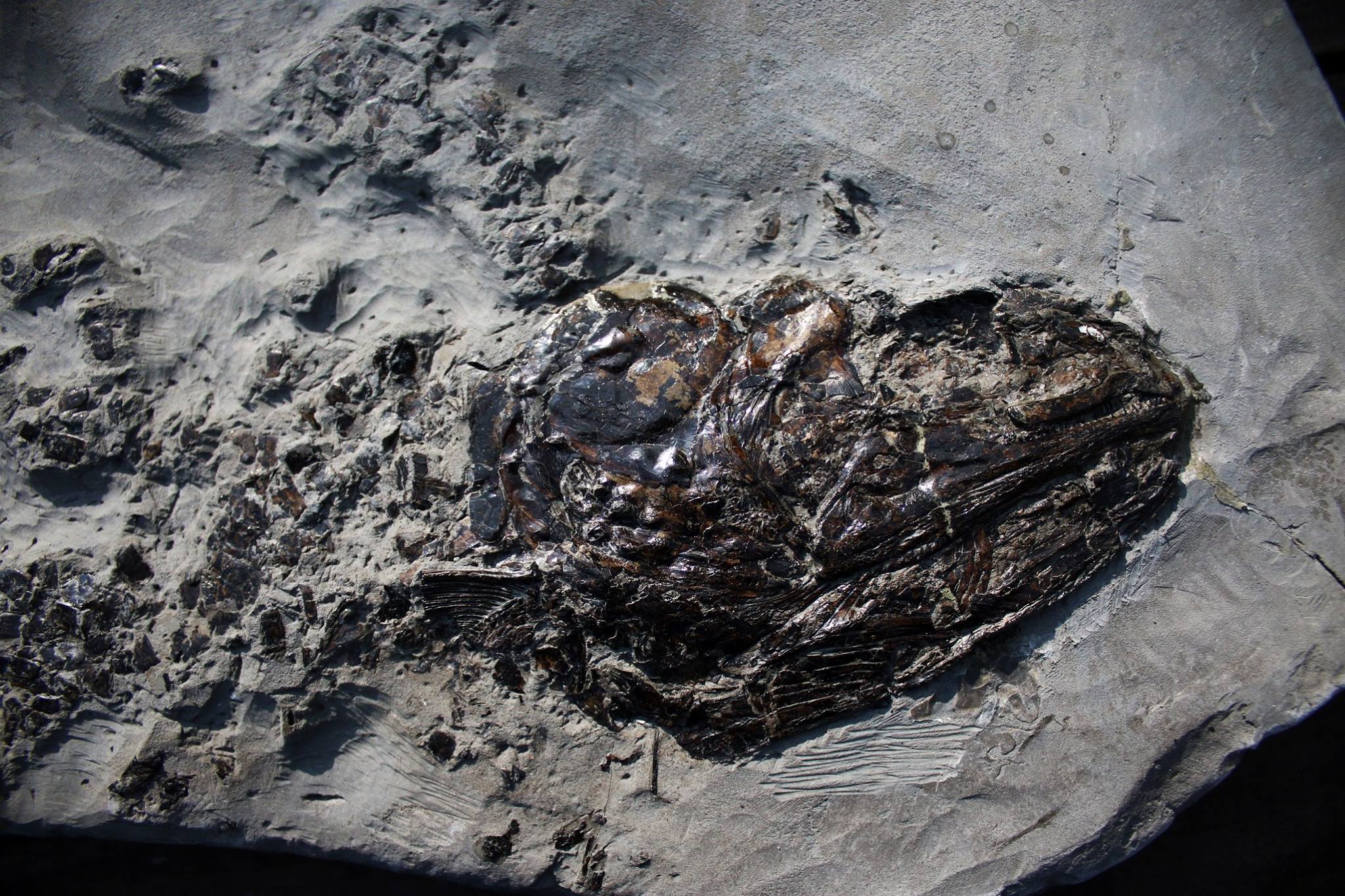 Walking east from Church Cliffs and Lyme Regis, or west from Charmouth, the tall slumped cliffs of Black Ven appear.

The Black Ven Mudstone is broken up into the lower unit, the ‘Shales with Beef’, characterised by laminated shales with bands of fibrous calcite – the ‘Beef’, in its lower part.  The upper part contained calcareous concretions, with well-preserved ammonites, also found in the overlying Black Ven Marls, including Arnioceras semicostatum, Caenisites turneri, Asteroceras stellare and Microderoceras birchi. These Birchi Nodules from the Birchi Tabular Beds can be seen clearly in the cliff.

At times of extreme low tide, traces of a submerged forest (including bones of mammoth and red deer) can be seen. The bones have been found close to the western groyne.

It is often the case that landslips at Black Ven will expose these beds and regular tides will keep them fresh. Searching the ledges at low tide is especially worthwhile.

Walking west, you will eventually come to Church Cliffs. For more information on the Blues Lias of Church Cliffs, please refer to our guide on Lyme Regis.

The uppermost beds of Stonebarrow consists of Upper Greensand, in which occasional ammonites can be found. A 12m-bed of Gault Clays follows the overlying Eype Clay. 20m of the Seatown Marls (previously known as the Green Ammonite Beds), overlay 23m of Stonebarrow Marl (previously the Belemnite Marls). There are also about 50m of Black Ven Marls that reach beach level here.

Within the ‘Black Ven Marls’, a layer of Flatstone can be seen, which is celebrated for its fine specimens of Asteroceras turneri, often preserved in yellow and brown calcite. Insects (beetles, grasshoppers, water-bugs and dragonflies) and the occasional plant remains can also be found in these flat stones. The shales are also richly fossiliferous, with ammonites, insects and fish remains. The crinoid, Pentacrinites fossilis, is often magnificently preserved within this bed. 10m above this layer is a line of nodules called the Stellare Nodules, in which the common ammonite, Asteroceras stellare, can be found.

The ‘Belemnite Marls’ are bluish-grey in colour and are famous for the eponymous belemnites, although ammonites are also common including, Tropidoceras masseantum, Platypleuroceras brevispina, and Beaniceras luridum. At the top of this bed is a limestone called the Belemnite Stone, which is also full of belemnites, ammonites, bivalves and some brachiopods (Rhynchonellida).

Common sense when collecting at all locations should be used and prior knowledge of tide times is essential. Care should especially be taken at Charmouth of tides, as the sea could cut you off, especially at Black Ven. Climbing slippages is not recommended, as it is dangerous because of the deep mud. The mud may seem hard at first sight, but could be a hazard. The high cliffs at Stonebarrow are also dangerous for falling debris.

It really depends on what you aim to collect, as to what tools to take. Collecting is best done on the foreshore, in which case, just good eyes are required. Collecting from the soft clays (especially from the slippages on the foreshore at Black Ven) is best done using a knife or pick and a small spade. If you intend to split rocks, especially nodules, then ideally you need a good hammer and possibly a chisel. Do not dig into the cliff at Lyme Regis, both for safety reasons and because it is against the rules of SSSI that apply here. In any case, you have a much greater chance of finding fossils lying on the foreshore.