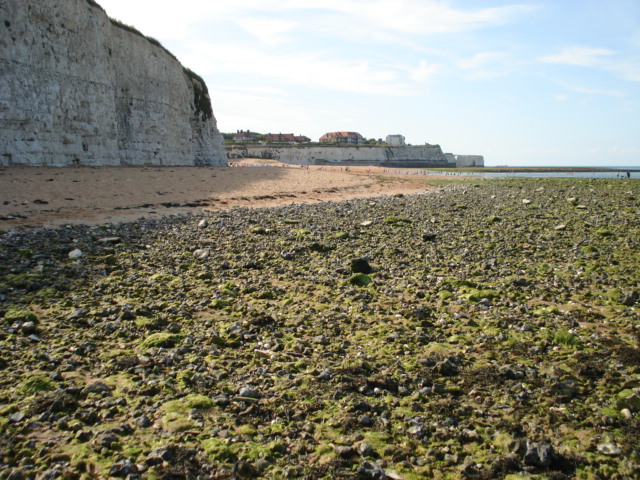 This stretch of chalk coastline can be accessed from Broadstairs to the south or Joss Bay to the north. Fossils can be found both in the chalk and in the abundant flint pebbles on the foreshore. Common finds include echinoids (sea urchins) and sponges.

♦ It is recommended that you park in the pay and display car park to the south of Kingsgate, at Joss Bay. From here you can access the beach and walk south towards Broadstairs.
♦ Alternatively, you can park in various locations in Broadstairs and make your way down to the beach from there. If you park in Broadstairs, be sure to check out the fossil shop on the way down.
♦ Ref: 51.37390°N, 1.45009°E

FIND FREQUENCY: ♦♦♦ – It is unlikely that you will leave this location with a whole bagful of specimens, but, with patience, you should find a few good pieces to take home. Fossils can be found all along the stretch of coast between Broadstairs and Kingsgate.
CHILDREN: ♦♦♦♦ – This location is ideal for children. From both Joss Bay and Broadstairs, the going is easy, with no major obstacles. In the summer months, the beaches here are very busy at both access points. However, if you walk a few hundred metres, they are practically deserted.
ACCESS: ♦♦♦♦ – There is a pay and display car park at Joss Bay, with beach access directly below. From here, walk south towards Broadstairs, looking for fossils as you go. There is also pay and display parking in Broadstairs and the beach is also easily accessed here. From Broadstairs, walk north.
TYPE: – Fossils can be seen in the chalk cliffs and extracted from the fallen boulders below. The foreshore is covered with flint pebbles, which are eroded out of the chalk and some nice specimens can also be found in these.

Echinoids (including Echinocorys and Micraster), sponges, corals, crinoid pieces, inoceramid brachiopods and bivalves (Cordiceramus and Sphenoceramus) are all common finds at this location. None are particularly abundant, but they are there – you just have to spend a while looking for them.

Fossils can also be seen in the cliffs (which should not be hammered for safety reasons) and extracted from the fallen chalk boulders below. It is also recommended that you look through the flint nodules that are extremely abundant on the foreshore. Common finds in these include echinoids and sponges.

The cliffs of North Foreshore display the Upper Cretaceous chalk of Santonian age. The White Chalk Subgroup here is composed of the Seaford Chalk Formation. There are several distinct bands within this, which can be seen in the excellent exposures at this site. These are the Whitaker’s 3- Inch Flint Band, the Bedwell’s Columnar Flint Band, Rowe’s Echinoid Band and the Barrois’ Sponge Bed.

Common sense when collecting at all locations should always be used and you should check tide times before visiting. Make sure you visit this location at or near to low tide. There is no way off of the beach between Broadstairs and Joss Bay, although there are places where private stairway tunnels to the top of the cliffs can be accessed in a real emergency. However, these are locked at the top. Do not hammer into the cliff face to avoid causing rocks to fall. The foreshore can be slippery due to mud and weed.

A good, sturdy bag and plenty of packing material, as well as a hammer and chisel, are needed at this location. Waterproof boots with a good grip will also come in handy.